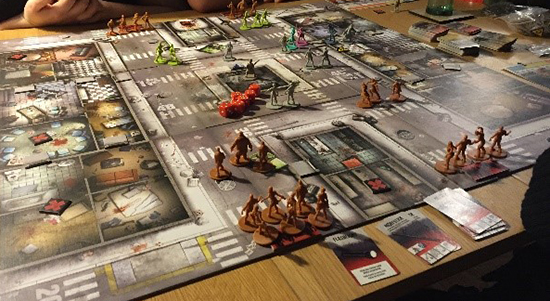 Publisher: Cool Mini Or Not (CMON)

One of the first big boardgame successes on Kickstarter, Zombicide is all about surviving the apocalypse and (unsurprisingly) ever-increasing hordes of Zombies, finding better weapons and equipment, completing specific mission objectives and avoiding allowing any Survivors experience level getting too high too soon, as zombies spawn based on the highest player level. Mission success is typically dependant on the team, and in some particularly hard missions, a single survivor falling can result in failing the objective. Or put another way, if you have ever played the likes of Left 4 Dead, then this will seem VERY familiar….

Zombicide can be categorised as an “Amerithrash” game. It has high quality components and a LOT of plastic miniatures, coupled with fairly ‘beer & pretzel’ game mechanics. The sheer volume of material in the box can make it seem a daunting prospect setting up, but it’s actually surprisingly quick, especially if you take the time to have the various counters and tokens bagged up. First step is to select a mission from the rulebook (or online, either from the Zombicide website or one of the many fan-made missions out there – some links are at the end of this article), then build the specified map.

Happily the large double-sided play tiles are all numbered. Each player then picks a Survivor (the sweet spot is for 6 survivors, although the game provides guidelines for scaling up or down), taking the appropriate miniature and dashboard, affixing an experience tracker and taking several experience tokens for when new skills are unlocked.  Zombies are placed off to one side, divided by type (I find the box lid is great for this) and the other tokens split into separate pools. Survivors are then allocated equipment from a set pool of starting gear that includes frying pans, a crowbar and a fire-axe (some survivors may have additional gear they are issued listed on their card - for example Phil the Cop receives a pistol). Everyone then dices off and the highest score goes first.

Each turn starts with the first player who activates his Survivor(s), performs whatever actions they are able to and then play moves on. Survivors begin the game being able to perform two actions from a list that includes moving, searching rooms, attacking, opening doors, pushing switches and buttons. Some actions can only be performed in certain circumstances – for example, opening a door requires an item like a crowbar or fire-axe. Searching can only be done inside buildings, but be careful as some cards in the search deck result in finding, not sweet gear, but a shambling corpse! A word of caution; some actions can also create noise, which brings us to ‘The Zombie Phase’ once all the players have activated, each zombie on the board activates based on certain conditions. If in the same square as a Survivor they will attack, otherwise they will move towards the nearest visible Survivor or the largest concentration of noise tokens. Each Survivor counts as one noise token, but as actions can create noise, players can get creative in drawing zombies away. Once all the zombies have activated, players draw a card from the Zombie deck for each active spawn point on the board, the number and type of zombies dependant on the highest player experience level (blue, yellow, orange and red).

This can lead to games getting incredibly tense as players guide their Survivors to open up locked buildings to access gear, hoping few, if any zombies spawn whilst they try to find good gear. Also you must decide whether to risk a fight or spend actions to run away.

Zombicide games have no time limit, typically running until the mission has been completed or all the Survivors are dead.  This can sometimes lead to lengthy games, especially in missions that use larger maps and when more players are involved. Games can also get increasingly ridiculous, especially with the more extreme gear from the later games and expansions letting players go a tad nuts in taking on the shambling hordes and rolling handfuls of dice. It can also lead to moments of painful altruism and hilarious betrayals.

For example: in one particularly fraught mission with four of us, we were attempting to make the final run to the exit point on the map. Three of us were in the middle of the street in clear line of sight for, every zombie on the board! The fourth member of the team was in the building running alongside the street, but the only open door was beyond the massed horde shambling towards us from the far end of the board. We’d planned for the fourth player to open the locked door behind us so we could funnel the horde in, but he instead ran for the door that opened next to the exit point. Our valiant trio put up a fight, but inevitably weight of numbers pulled us down. Meanwhile our 4th (let’s call him Judas) used us as a distraction and exited the board. We laughed, we cried. His girlfriend resisted punching him out!!!

This is a very pretty game, if slightly macabre. The art style is wonderfully cartoony (something my friend who is petrified of zombies appreciates, as it doesn’t wig them out as much as most depictions). Characters are distinct, and the miniatures are fantastic for boardgame quality. You also get a load of them. The game boards and tokens are chunky, durable and easy to read.

To date Zombicide comes in 5 core games in 2 distinct eras and several expansions, but we’ll focus here on the modern setting:

Zombicide (sometimes known as Season One, or The Red box) is the original and features the classic Zombie Survival trappings – average folks fighting through modern streets against the walking dead.

Season 2 – Prison Breakout takes the action inside a prison, as a new band of Survivors scrounge for gear and safe refuge whilst trying to deal with a new breed of tougher zombies.

Toxic City Mall introduces four extra survivors with new skills, new map tiles for a shopping mall, toxic zombies that explode with destructive goo, and the Zombivor mechanic where a  survivor who dies can return in a partially zombified form; tougher, but slightly slower to act.

Season 3 – Rue Morgue mixes things up by going into the grounds of a hospital, doubling the number of Survivors to 12 and introducing a ‘vs mechanic’ where players form two teams competing to complete the mission. Oh, and it also has a helicopter….

Angry Neighbours has another clutch ofSurvivors, map tiles with collapsed pits, and Companions - specialists who aren’t full survivors but can follow along and offer some useful support.

There are also a bevy of smaller expansions, Special Guest boxes where noted artists have their concepts for Survivors turned into plastic packs, with additional zombies of the various types and smaller extras like zombie dogs and crows, or dogs that can act as companions to your Survivors.   There are also two compendiums that print scenarios from the official website and some linked campaigns. What’s really nice is that all the various Survivors, maps and zombies are cross compatible, so you can stick with one core set or you can expand it as far as you want (my own copy currently resides in a standing tool chest).

A final point on longevity is that the developers have a free scenario creator for download off their website, as well as blank templates for creating your own Survivors, so the sky really is the limit.

The basic gameplay is fairly simple, but each version of the game offers a variety of missions and mixing up of Survivors, equipment and different types of zombies can open up a vast array of challenges and strategies to try and beat them. There is something immensely satisfying about cracking a mission and a full team getting out, or finding the materials to build a Molotov cocktail and using it to clear a big swarm of zombies.

A mechanic that controls how the Zombies function, means it happily plays as a solo game, and can scale up quite a bit if you have enough Survivors. Extra players adds to the time the missions can take, so six is really the max unless you and your group have time to burn and want to sit in for the long haul.

There is an elephant in the room that has to be discussed and that’s Kickstarter. As pioneers in funding on this platform there have been a LOT of exclusive models made that you only got for backing the campaign. However, none of these are essential to the game. Be warned if you do want to acquire them expect to pay, especially for the Season 1 exclusives that were made in much smaller quantities.

On price, the core games tend to retail between £60 and £80, depending on retailer, the larger expansions for half that and the smaller sets are around the £20 mark. If you want something you can break out with some friends, roll dice and flee from ever-increasing hordes of zombies, give it a shot.

(And if the modern theme is not your bag, Black Plague & Green Horde take the action into a medieval fantasy setting, and this April they will be crowdfunding a SciFi version that replaces zombies with aliens)

8
Handfuls of dice, handfuls of zombies and numerous (often hilarious) opportunities for Survivors to screw each other over, both intentionally and unintentionally!
COMMENT AND DISCUSS
blog comments powered by Disqus