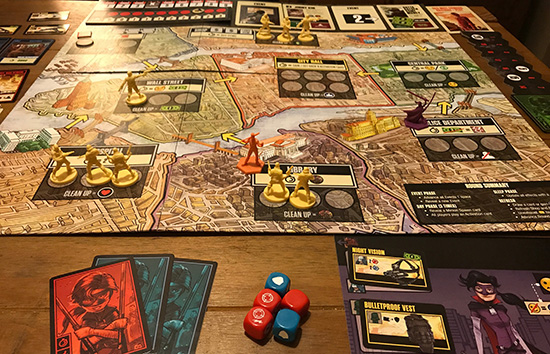 You’ve all seen the movie. You’ve all wondered what it might be like to leave the boredom of the day-job and spend your nights battling bad-guys under the guise of a super-hero alter-ego. Well here is your chance. Pick your character and work with your fellow heroes to defend New York city from invading criminals. To win you must eventually take down the ‘Boss’!

There is a huge amount to do for the set-up of this game, here’s a summary:

This game is based in New York and so the board depicts a map that shows eight districts of the city, each containing spaces for ‘spawned’ villains. Throughout the game your mission is essentially twofold – you need to complete the missions on the event cards, whilst also taking out the villains that invade the various districts. Failure to take out the villains will mean that they take over the city, but failure to complete the event missions will mean that you can’t take on the bos’ – both meaning that you lose the game. Therefore, it is a fine balance of both that will get you the win.

In order to do the above you will use your turns to play your activation cards of which you have two types to begin with:

As mentioned above, blue cards allow you to spend time in districts to improve your attributes that are tracked on your character card as follows:

The game is played over 9 rounds which are each made up of the following phases:

This consists of the same sequence three times:

So often games that are based on movies/TV shows/books don’t deliver, usually because the focus has been on using the existing brand to sell the game rather than actually thinking about making a great game that is enjoyable regardless of brand. I’m so pleased to say that this is absolutely not the case here. This is a great game in it's own right.

As a co-operative game it is key that all players communicate and synchronise their actions to keep the villains at bay and complete the events. However players are able to make decisions alone, so unlike some cooperative games there is less chance of one player taking over all of the strategy, which is a huge upside.

Everything about this game is really well put together, from the superb comic-based artwork to the miniature figures. The box is well designed for storage of the huge array of pieces and cards – a big win for hard-core board-gamers! One frustrating thing about the quality of the product is the fact that all of the cards are incredibly slippery and are always sliding all over the place! The other downside is that there are so many pieces that set-up and packing away are rather complex tasks.

This is a complex game and so the rulebook is pretty lengthy. To be honest there are a few things repeated in there that really don’t need to be. It is nicely broken up with a comic strip narrative which is a nice touch. One read-through of the rules and no googling, and I was away, meaning that the rules are clear and comprehensive.

My favourite thing about board games and their resurgence in popularity is that they allow people to set their phones/remotes/game controllers to one side and get back to good-old social interaction. That said, another thing I loved about this game is the fact that you can play it on your own, something that we are seeing more and more of in the gaming world. As much as I love to play games with my friends, sometimes they don’t want to play and great games like this allow me to have fun on my own! However I did find, even with the adapted rules for solo play, that it was more difficult to win alone than with companions – we all know that super-heroes are better with an ensemble!

If you love games like Pandemic and Spirit Island then this will be completely up your street! Strategy is key but the dice-rolling for combat adds a luck element that makes it exciting. The more players you have the more complex and frantic the action gets, so I would say that 2-3 players is the optimum. The artwork and quality is also a huge selling point! 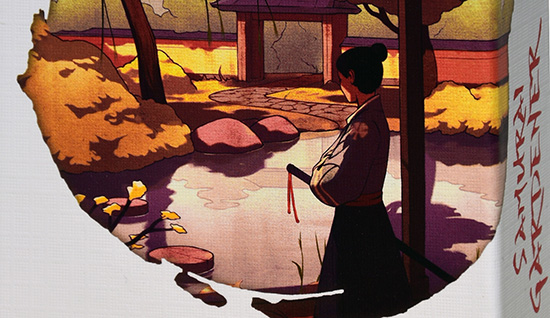