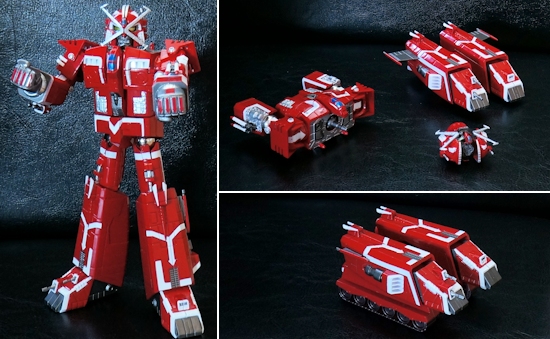 Kidults of a certain age may remember the Go Nagi puppet show, Star Fleet. Originally called X-Bomber in Japan, this strange, Thunderbirds-like series featured marionettes of high quality battling a fiendish empire in some fantastic, industrial mecha. With a super fighter that looked a bit like a turkey (the titular X-Bomber) and a giant red robot comprised of 3 ships battling along to a very 80's soundtrack (later covered by Queen guitarist Brian May),  it was unlike anything else on TV at the time.

The giant robot in question has only ever recieved poor toys, with inaccurate colour schemes and poor quality. This die-cast version from Dynamite Action is the polar opposite - highly accurate, weighty and very detailed. For fans of the show, it's a real treat.

The individual ships that comprise Dai-X are, on the whole, gorgeous. BrainCom (the head component) in particular is beautiful - the level of detail crammed into such a small item is remarkable, and while transforming it between robot and fighter is quite a worrying experience due to the small size and fragility of the toy, you can't help but admire the effort that went into creating it.

Mainbody (the torso) and LegTrax (the legs - you can see how this works!) are less impressive but for different reasons. Mainbody was never much more than the torso lying down, but that's not the toy's fault, and LegTrax is just a bit ungainly in the way it transforms - it only really looks good from the front, though the addition of the tank treads as an extra is appreciated.

The figure uses powerful magnets to combine into Dai-X, and when assembled it's every bit as charming as you might remember! Painted details look fantastic, the little cockpits from BrainCom and MainBody give it a real feeling of size, and the posability is also excellent, thanks to a range of motion provided by ratchet joints in the arms and the sheer grip of the magnetic ball joints everywhere else. As a display piece, it's gorgeous.

The inevitable BUT arrives with a depressing thud, sadly. The toy is beyond delicate - even out of the box I've had to superglue bits back on - BrainCom's underside rocket and helmet both needed re-attaching thanks to very weak friction connections. The magnets in the little boosters for LegTrax fell out and then connected to each other in a way that was almost impossible to separate. Once I glued them back in, I made the fatal mistake of leaving them too close together, so when the little buggers flew out again they became properly inseparable thanks to landing glue-side - you couldn't make it up!

Other little QC issues are also evident - one of the head lasers/horns isn't properly inserted, and I can't risk pulling it out to reset it because of how delicate it is! The leg panels, which you have to remove for transformation, slide out a little too readily, and overall the thing feels so delicate that I almost dare not sneeze near it!

What we end up with then is a figure that is at once beautiful and faithful to the television original, and scarily delicate. It certainly isn't anywhere near robust enough to be a toy, and the fact that you have to insert little pieces to complete transformation back to the individual ships (not to mention the awful instructions) makes it frustrating to play with too.

Nostalgics and fans of Go Nagai will put up with all these flaws I'm sure - if only to encourage Dynamite Action to release an X-Bomber to go with it. For anyone else, this is a curious little figure best avoided - take off 2 points from the overall score if you're in this camp!