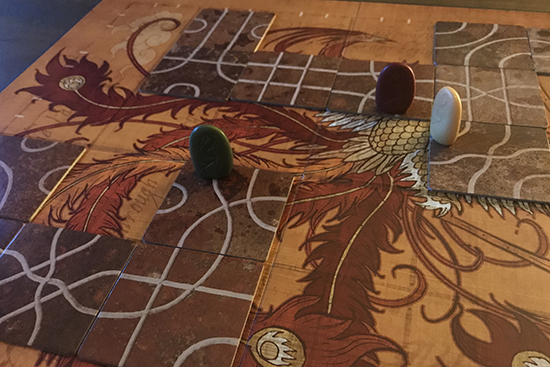 The board for Tsudo is eventually made up of a series of paths that represent the many roads that lead to divine wisdom and you are on a quest for enlightenment. Your aim is to keep your game token on the board longer than any of your opponents, in order to become the most enlightened.

This game has a really simple set up. You have a board, coloured tokens for each player and a selection of tiles. To set up the game, you lay out the board, deal three tiles to each player, leaving the remaining tiles face down in a replenishment pile and players select a coloured token, which they then place at any of the marked points round the outside of the board.

Each tile pictures four paths that cross the tile in some way. Players take turns placing tiles next to the one that they token currently inhabits in order to extend the path that their token is on. Their token then moves along the path until it is halted by the tile edge. They then replenish the tiles in their hand and play moves on.

Inevitably you will get to the point that the path for your token leads off the board and you are out of the game. In order to win the game you must be the last player with your token on the board. In order to achieve this you are at some points able to lay tiles that force your opponents of the board, which adds to the competition.

This is a really simple, but interesting game which we really enjoyed playing. Being successful required thinking ahead, keeping an eye on your opponent’s moves and logical thinking. Games don’t last long, so if you are not successful first-time round, you can quickly learn your lessons and try again!

As there is little complexity here, this game won’t appeal to all gamers. It will appeal to anyone who loves games involving logic and puzzles and it is perfect for groups who want something to play whilst they have a good natter, as you can compete without having to give the game huge amounts of concentration.

7
A perfect, light game to enjoy whilst you drink and natter!
COMMENT AND DISCUSS
blog comments powered by Disqus