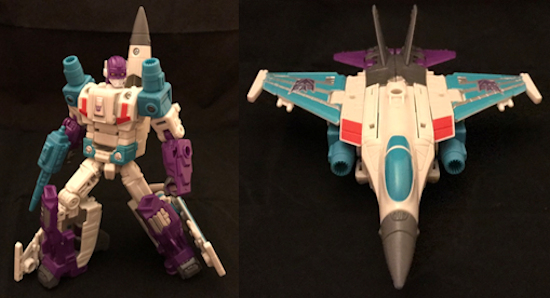 A genuine (and pleasant) surprise amongst the announcements for the Transformers Power of the Primes line was that amongst the likes of Jazz, the Dinobots, Moonracer, and the Terrorcons, the (by this point) venerable Combiner Wars moulds for Aerialbots Air Raid and Skydive would be getting retooled into the Decepticon Powermasters, Dreadwind and Darkwing, with some updated features for the POTP line.

Now Dreadwind has a bit of form for readers of the old UK G1 Transformers comic, as after Grimlock and his Grim Grams letters page was retired by writer Simon Furman, Dreadwind took over offering replies to reader letters in his distinctively morose style for the remainder of the UK titles run – a fun conceit to young readers that made the character a fan fave, especially coupled with a series of appearances in UK only stories that established he and Darkwing as a deadly, if misanthropic, pairing typically at odds with their Powermaster partners.

Speaking personally they were, other than the previous year's Triggerhappy Targetmaster, the only Decepticon jets that I owned as a kid. They were big & chunky and just looked boss in each mode, with the novelty of combining both jets into the larger Dreadwing super-jet. They hadn’t received much love otherwise though outside of a Generations/Universe reworking of ultra-class Silverbolt into Darkwing, and a highly sort-after Botcon exclusive Dreadwind created from the Classics Jetfire mould. With a much cheaper price I had to give the POTP versions a shot.

Dreadwind is a retool of Combiner Wars Skydive with some noticeable changes, coupled with a killer colour scheme. Just look at those teals and purples against the light grey. Wonderful! And, surprisingly given reports I had heard, not a single sticker is applied – everything on Dreadwind is either coloured plastic or painted, and in fact on closer inspection the purple has a light metallic flake to it. Very nice. As for the sculpting changes, they're surprisingly extensive.

There’s the obvious new head sculpt, which captures the distinctive design to a tee. New shoulders for the signature intakes (which I just realised are also 5mm postholes so he can be even more armed-up), and then the most dramatic alteration, the wings which were fixed on Skydive (but hinged to fold back) have been fitted to a moving bracket mounted on the rear of the jet that fold forward normally for the usual silhouette but fold back to facilitate the combined jet mode with Darkwing.  That right there is a most welcome touch. This does have a flipside in that it means the wings wind up on the robot modes legs when transformed, but I dig how they look folded forward.

Posability-wise Dreadwind retains all the functionality that made the Combiner Wars line such a hit. He can’t quite hit a full Van Damme due to the design of the hip pieces, but it’s close. Otherwise you can get a lot of dynamic posing out of him.

Transformation remains an intuitive process, the only niggly part being where the legs split. When  transforming to robot mode there are specific points below the knees that need to be orientated correctly and tabbed into the back of the legs. It’s not a major thing but sometimes if not paying attention it can get missed. The jet mode is slick, even if it does basically have  a robot hanging off the underside. Jet-formers, whatcha gonna do?

The Combiner limbs are as expected, although the change in the wings gives a bit more mass  to the ankles & forearms that is unexpectedly welcome.

Interestingly POTP has replaced the dual-function hands/feet for combined mode that came with every Deluxe-class Combiner Wars figure instead with a dedicated hand piece, with dual-thumbs and a removable piece on the back that can be removed to allow one of the POTP matrix attachments to be fitted instead (feet come with each Voyager-class torso figure).

Dreadwinds hand-piece is cast in the same purple & metallic flake plastic as his arms and lower legs, fingers & thumbs the same off-grey as the majority of the body and the “chip” in teal. Functionality seems good, and it’s a nice touch that the unused thumb can be positioned to create a more fully formed hand. There is also a single blaster cast in teal that looks good, but it’s a bit of a shame that Dreadwind gets just one gun but Darkwing will have two (thankfully Shapeways has a number of solutions to that for the enterprising collector).

Getting back to the hand, as part of the POTP gimmick these pieces are intended to also be used as “armour” for the ‘bots they come with, but I can’t say I’m convinced of the effect – in robot mode they can connect to a port in the combiner column found by flipping down a panel in front of the head, but it does rather bulk the chest out unnecessarily. I had found an alternative by using one of the arm ports, but after getting all the pictures taken I found that the port from the top of the jet mode where it can sit (a neat callback to where the Powermaster partners fitted on the original figures). It adds a bit of junk to his trunk, but otherwise is a neat solution of where to store it.

In jet mode it can be a tad obnoxious, but adding the gun does give it echoes of a Macross-style super/fast pack.

Overall then I’ve found Dreadwind to be a superb first dip into Power of the Primes Deluxe-class, and I’m looking forward to picking up more figures, especially Darkwing to complete the Powermaster pairing. The two should make great arms for POTP Starscreams combined mode, just a question of sourcing good legs (one disappointment from Hasbro & Takara more closely coordinating their releases is that it likely means we won’t see these two released in Hydra & Buster colours from Masterforce, which would have made a great excuse to double-dip..).