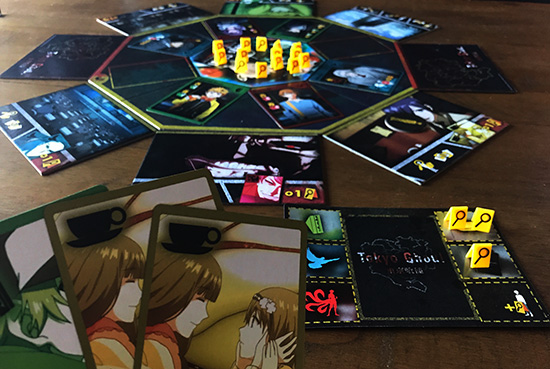 Looking for something spooky to keep you entertained this Halloween? Let’s see if Tokyo Ghoul: Bloody Masquerade can offer a sufficient fright…

Tokyo Ghoul was first released as a manga series between 2011 and 2014. It then became an anime series which has had several re-incarnations since 2014 and the franchise is still going strong. Now Tokyo Ghoul has been released in boardgame from with ‘Bloody Masquerade,’ brought to you by French designer Florian Grenier and a small game publishing company called ‘Don’t Panic Games,’ that has been running since 2013.

Set in Tokyo (obviously) the premise of this game is that hidden among the people in this world, there are also Ghouls that must survive by eating human flesh. The series’ lead character is Ken Kaneki who is a half-ghoul, half human hybrid who must balance his lust for flesh with his human morality as he gradually learns about the ‘Ghoul’ society.

Ken befriends a group of friendly Ghouls in a coffee shop called Anteiku, who teach him how to satisfy his lust for flesh humanely. You will come across many of these characters in this game. You will also encounter members on the Commission for Counter Ghouls (CCG – although to me that stands for Collectable Card Game, which is a bit confusing), whose inspectors hunt down and kill Ghouls regardless of whether or not they are displaying any morality!

In this game, you will secretly take on the role of a Ghoul, Human or CCG Inspector and endeavour to complete a separate mission dependent on that role!

There are a selection of characters from the anime series available to use for the game and you choose a combination of characters based on the number of players. For example, we had six players and played with a combination of 3 humans, 1 inspector and 2 ghouls and then another game with 2 humans, 2 inspectors and 2 ghouls, with either configuration allowed by the rules. You take the token for each character you are using and secretly deal one to each player (they can look, but must not reveal which character they are). You also lay out in the game area the cards corresponding to each character as these show their victory conditions.

You lay out the octagonal game board in the centre of the table and place eight location tiles round the edges. Six of these locations are face up and two are placed face down (more on this later). The active player token starts on one of the face-down locations and suspicion tokens (4 per player) are placed into the centre of the board.

A deck of cards is made up for the game with enough to be able to deal three to each player. To enable you to easily get the right quantity of each colour card, the cards are numbered to show which are for 8+ players, which are for 7+ players etc.

Finally, each player is given an investigation board that goes in front of them. Throughout the game, suspicion tokens will be moved onto this as an indicator of what which cards each player is holding.

Prior to starting, it is key that you understand the win conditions, as this will influence your actions from the very beginning. The difficult part of explaining the win conditions is the fact that they are different for each character. However, they can be split into the following groups:

Kill Win – To win in this way you have to meet a certain condition (e.g. to have two blue cards in your hand) and then you can select a victim that must also meet a condition (e.g. they must have at least 3 suspicion tokens on them). Then on your turn you can kill them and provided that you kill the correct type of character (e.g. inspectors kill ghouls) you win.

Survival win – Usually the aim of human characters. To win in this way you must make it to the end of the game without being killed and have two cards in your hand of a given colour.

You are only able to declare a kill or instant victory at the start of your go, before you take any actions. This means that gaining the wins isn’t quite as easy as it may initially look. For example, you may get three cards in your hands by the end of your turn. However, by the time your next turn has come around there is a high chance that one of the other players has taken one of your cards and messed up your opportunity!

Once all of the suspicion tokens have been moved out of the centre of the board, the game ends and players check whether they have met the ‘survival win’ condition.

Although the game-play process initially seems fairly complex, the tactics are pretty simple. The main dynamic is the colour of the cards in your hand. If you are a human character you are likely to need to collect green (food) or yellow (coffee) cards, whereas inspectors collect blue (dove) cards and ghouls red (transformations) cards.

Initially you need to try and figure out who might have the cards that you need. You will gain a little insight into this during the initial card reveals. After that you can learn who has what by examining their cards during your turn or by watching where they place markers on their summary board throughout other players turns. If you want yellow cards and a player is forced to place a suspicion token on their yellow space (indicting that they are holding at least two yellow cards), provided another player doesn’t swap with them first, you are going to be able to swap one of their cards into your hand during the interrogation phase of your turn.

If you are aiming for a kill win your tactics are two-fold. Firstly, you need to collect the correct coloured cards to enable you to action your kill. The tactic for this is similar to above. Secondly you need to select the right type of victim. To do this you have to try and determine what cards players are trying to collect and decide who is collecting those needed by your enemy group. To do this, again, you need to keep an eye on what suspicion tokens players are placing on their summary boards. For example, an inspector character will want to kill a ghoul. Ghoul characters will be wanting to collect red (transformation) cards, so any player putting multiple suspicion tokens onto the red space of their summary board is likely to be a suitable victim. When Ghoul characters are also restricted to only killing when they are in the ‘killing’ locations. There are the two locations with a red edge which are the ones placed face down at the beginning of the game.

Remember that these tactics are not infallible. What cards a player gets is completely random at the beginning of the game and so the suspicion tokens placed early on don’t necessarily mean anything other than indicting what cards that player has in their hand at that point in time.

Either one or both of these variants can be added to the game once you are comfortable with the basic game dynamics.

Mask Variant – This introduces additional characters with varying win goals, an additional colour of clue cards (purple, mask cards) and a few new rules. Player get four cards at the start of the game instead of three but one is placed face up on their board. The face up card has to be a mask card if you have one and these cards can be used for exchanges in the interrogation phases.

Support Variant – At the start of the game players each receive support tokens. One of these tokens will be a red ‘Transformed Kaneki’ token, whist the other white tokens are neutral. Players check which token they have but don’t reveal this. At the end of each players turn they are allowed to either look at one of the tokens (either their own or another players) or to swap token with another player to try and get hold of the powerful Kaneki token. These tokens come into play only in a kill scenario. If a player is attacked when holding the ‘Transformed Kaneki’ token they will survive the attacked, although this doesn’t necessarily mean that they win the game as win conditions still have to be checked for all players at this point.

When you get games that are based on TV series they tend to fall into two different categories – either they are already great games that have the TV series brand added to it (e.g. Game of Thrones, Catan) or they are games that are built round the dynamic of the TV shown, such as Death Note confrontation. This game falls into the latter category and sadly this is to its detriment. It is evident that the game designers have worked really hard to base all of the dynamics of the game around the themes and stories of the anime series. It is often unfortunate that when this is done the game doesn’t necessarily work as an exciting concept on its own merit.

The game board, pieces, cards and artwork are of great quality, and again are true to the anime. The instructions are not as clear as I think they should be – initially a French designed game, I wonder if something was lost in translation here! This game is so new that I couldn’t find an instructional video online in English so had to carefully study the rulebook three times over before we could get going.

This game is for 4-8 players, but as secret identities are key, I would say the more players the merrier so 6+ is my recommendation. Games of this type for this many players are fairly unusual and means that it will only appeal to players who gather together larger groups of players. As games are of a fairly short length it is a good one to have around for ‘large number’ game parties that are as much about socialising as they are about serious game play because as well as games being short they also aren’t particularly involved or intense.

The variants do add another level of complexity to the game, giving you more to think about and making it more interesting. However, it does feel like the makers have just tried to add in other elements of the anime narrative rather than thoroughly thinking about what makes for an exciting game dynamic.

If you are a fan of the Tokyo Ghoul anime, and I know there are a huge amount of fans out there, you are likely to love how authentic this game is to the themes of the series. On the other hand, I can’t highly recommend it on the basis of the game play alone. The £35 price tag is pretty hefty for what you are actually getting here – I would say you are getting a £25 game and paying £10 extra for the recognisable Tokyo Ghoul branding.

Nothing too scary here, other than the rule book format, so definitely one for Tokyo Ghoul fans first and foremost.

6
A game of secret identities, authentic to the anime series, that Tokyo Ghoul fans will enjoy.
COMMENT AND DISCUSS
blog comments powered by Disqus