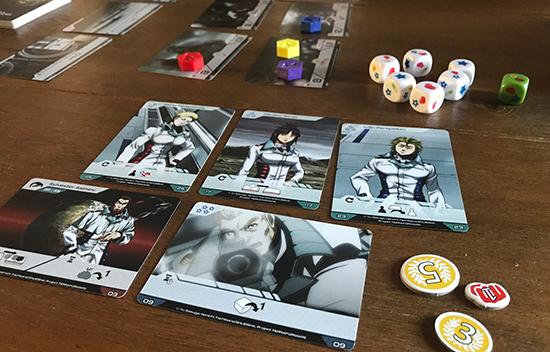 Terra Formars originated as a manga series back in 2011, with the English translation coming in 2014. Also, in 2014, two different anime were created from the series and 2016 saw the release of this accompanying card game.

The premise of the story behind the game is that Mars is being colonised, but in order to do this the planet had to be covered with lichens and cockroaches in order to heat up the atmosphere. This process is a form of terraforming - defined as making something ‘Earth-like’! Unfortunately, after 500 years of this terraforming process the cockroaches have evolved and developed incredible strength.

You, as a player, are a member of a specialist group sent to the planet to eliminate the mutant cockroaches. To give you the best chance, you and your group have been genetically modified in order to gain non-human characteristics. Throughout the game you will make the most of your own and your colleagues abilities in order to do the best job at defeating the cockroaches.

There are three sets of cards to set up:

You also have a selection of small pieces needed for play; ‘damage’, ‘star’ and ‘victory point’ tokens and seven combat dice.

You start the game by selecting a cockroach to take on and place your player marker on it. On your turn, you role the six combat dice which reveal ‘damage’, ‘star’, ‘danger’ and ‘syringe’ symbols. You can then spend these symbols to do damage to the cockroach, buy more support cards, role the bonus combat die or to use your characters special ability.

You can spend your support cards at any relevant point in the game in order to do more damage to the cockroach, to mess up an opponent or to gain an advantage in a multitude of other ways. The powers of each support card are indicated in pictorial form and it isn’t always clear what the images mean. Thankfully the rulebook contains a key which explains the abilities to you, as well as explaining the special abilities that the cockroaches also have.

As cockroaches are eliminated, they are replaced, and you move on to fight another until they are all defeated. At this point the player with the most victory points earned wins! The strategic key is to make best use of the support cards available and your main character’s special skills – this can mean keeping track of quite a few cards at the same time, but it is manageable. You are also able to jump into an on-going battle to try and steal the victory from an opponent and doing this at the right time can also pay dividends.

If you can get past the fact that ultimately this is a game about battling mutant cockroaches then you will like this little game. It’s easy to learn, but complex enough that it keeps you interested and gets you thinking about strategy, although luck on dice rolls is also a key factor.

Because of the symbol system used to show the capability of each card, you frequently have to make use of the key in the instruction booklet whilst you are learning. After a few games you then have a good enough understanding but it is a little frustrating having to pass the booklet backwards and forwards, at the start. Each box contains instructions in English, French, Spanish, German and Portuguese, so a lot of bases covered, presumably to allow the publishers to keep the cost down, which is clever.

There is a lot to like about this game and as with most games of this type it’s better the more players you have, although the two-player dynamic isn’t bad at all. I enjoyed it but wasn’t blow away by it as the theme didn’t really excite me. However, I’m sure any fans of the original manga or anime series will enjoy this game on a deeper level and draw more relevance from the imagery.

7
Fans of the original manga or anime series can now do battle with mutant cockroaches themselves!
COMMENT AND DISCUSS
blog comments powered by Disqus