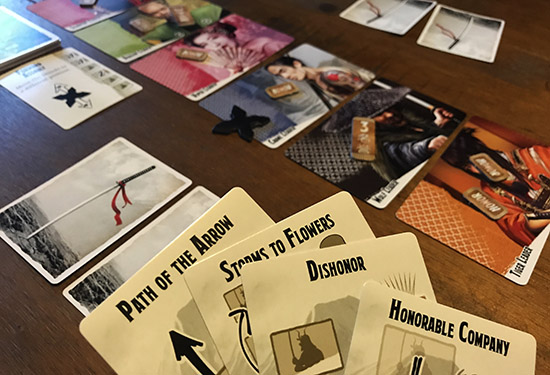 Shogunate is a game from established designer Adrienne Ezell. It was originally released by Readful games with different artwork to the 'Action Phase Games' version that I was lucky enough to get my hands on. Action Phase re-released the game after it became a finalist at the 2016 'Geekway Design Contest' - not a huge international accolade but still a good indicator that this has been recognised as a pretty decent game by industry professionals and players alike.

The premise here is that six clans are competing to try and ensure that their leader is the next in line to become the Shogun (the nations leader). You play the role of a political mastermind, called in to manipulate the line of succession. You have loyalties to two clans and must use your skills to try and ensure that the two candidates you are supporting have the best chance of becoming Shogun.

Play proceeds in rounds which consist of the following process:

So the key to game play is to check the plot card at the start of the round to see which place in the hierarchy will earn your leaders the most honour and use the best possible action cards to get them into those positions. When you are the Hatamoto, you don't play an action card so you need to manipulate the player order in a way that could get your leaders into the best spots - e.g. if you know or suspect that another player is loyal to the same leader as you, let them go last in the hope that they will move that leader into the best position and no-one else can go after to mess it up.

This is a pretty simple game to set up and understand, with great artwork by Jarek Nocon. The tactical side of the game is somewhat complex and so it did take a few games to get to grips with the best way to use the various action cards. The cards and pieces are good quality, although the instructions on the action cards can be a little unclear. Luckily you can refer to a longer explanation for each card in the rule book if you need it.

I found that the game gets better the greater number of players you have. This is because more players increase the chance that another player will be loyal to the same clan as you, allowing you to manipulate their actions for your advantage when you are Hatamoto.

Some of the people I played this with loved it and others weren’t huge fans, but here's what I liked best about it:

I believe the final point is the reason why it got mixed reviews among our group. It went down well with those people who liked to concentrate and think tactically about game play and it wasn’t so popular with those who like to chat whilst they play or want something more exciting/funny and less tactical. Another downside would be the fact that you can't play with two players, but it just isn't that kind of game.

Overall I thought this was a lovely little game for larger groups, particularly for those wanting something tactical that isn't going to drag on for hours! It's very reasonably priced too, so worth picking up if you regularly like to game with groups of 4 or more players!

7
A really reasonably priced game, best suited to groups of four or more player who like a quick tactical game.
COMMENT AND DISCUSS
blog comments powered by Disqus