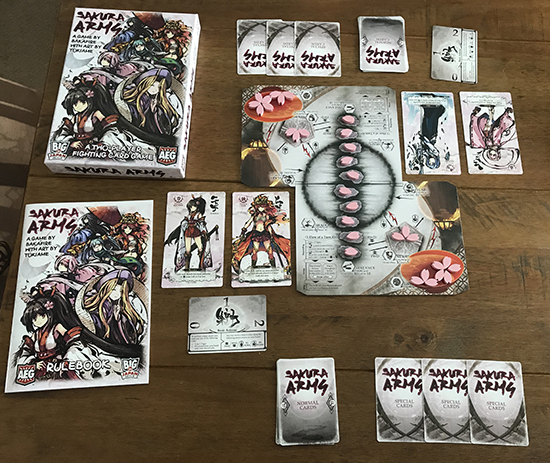 An eight-page comic strip at the start of the instruction manual illustrates the background story for the game. This is the age of Sakura and you are a Mikoto – a human with the ability to call on the powers of a Megami, in order to battle your foe. Megami are supernatural warriors that dwell in the Sakura tree and are linked to you by the Sakura petals planted on your hands.

This is a two player battle-style game, which uses a combination of card-game play and strategic piece (petals) placement in order for you defeat your opponent.

It is best, in the long run, to ensure that your deck has a variety of these cards, but you can balance it in favour of attacking or defensive play to any degree you want – the more you play and get to know the cards, the better you will become at this.

In the rule book there is a recommended set-up for your first game, that dictates which Megami to play with and which of their cards to select. I highly recommend that you follow these guidelines as it’s what we used and it really did help us get to grips with the game. As one of the selected decks is attack focused and one is more defensive, I suggest you play a game with each of these decks before you move on and select your own.

You also need to set up the game boards, which interlink and contain five key area that your Sakura petal pieces will move between:

This is a pretty complex game with many different elements involved. I am not going to talk about every single one here. The purpose of this article is merely to give you an overview of game play rather than full instruction on how to play, so I am just going to talk about the main elements and give some tactical pointers that you might find useful.

Players take turns to take cards, play attack cards or make strategic movements of petals between the five areas of the board named above. There is a cost to each movement so your opportunities are limited so you need to think carefully about what moves to make and when. Here is a general overview of movement you may make and why:

Also, throughout the game, petals will be moved round the board when you take damage to one or both of two areas:

Here are a few tactical lessons I learned from our first few games:

We really enjoyed the first few games that we played of this and we were using the recommended start up decks which did not include enhancement cards. I am really excited about going on to involved these cards, the additional rules for experienced players (detailed in the rule book) and then look at selecting different Megami and experimenting with different decks.

There is so much variety here, that I think it will give many hours of exciting play going forward. There are also three different expansions that each add two additional Megami for you to choose from.

I’ll be completely honest, when I first set this game up and went through the rules I was baffled and really didn’t get it. I looked for instructional videos on YouTube and could only find two in English, neither of which was very helpful (and one was done by a man with no top on, which was hugely distracting and not in a good way). But I persevered, re-read the rules and we ended up figuring it out as we played. It only took a few games before I got to grips with it and fell in love with this game.

I have previously played card fighting games, but found this much more enjoyable than those I’ve played before because of the petal movement, strategic element. This means the game isn’t just dependent on building a good deck, but also on understanding the gameplay, developing good strategy and analyzing your opponent’s play.

The graphics, as you can see from the box are awesome, and a real selling point for this game.

The only down-side to this game is that the set only contains the exact number of ‘Sakura petal’ pieces you need to set up the game. This means that if you happen to lose one or more pieces you have no replacements.

I would definitely recommend this game to anyone who is a big fan of two player battle style games. Also, if you love strategy heavy games, but usually only have one person to play with, then this game is perfect for you. With variation in the characters in the original set, as well as available expansions this game also offers a lot of variation and longevity.