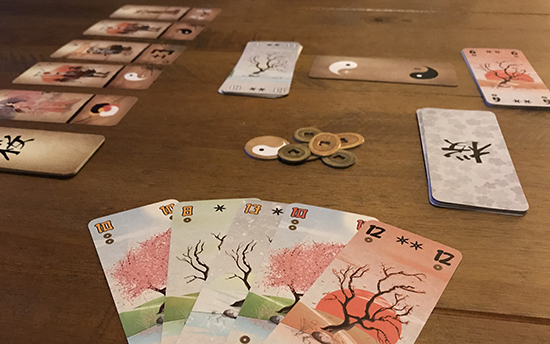 The rules for this game states:

“Every spring, the cherry trees blossom all over Japan. The Japanese celebrate this occasion, as according to their traditions the goddess of Fuji mountain, Konohana Sakuya Hima, revives the fallen flowers at this time. The cherry flower is a symbol of vitality called ‘sakura’ “

There are images on the cards of the Sakura trees at various stages of bloom, but this is the only clear link between the game and the above statement. So your guess is as good as mine as to the true meaning of this game – I can only summarise that it is Japans answer to Uno!

Players are dealt an even number of cards (different amounts depending on player number) out of a pack of 52. Each card contains a number from 1 to 13 which is written in one of four colours and no two card of the same. Then two more cards placed on the table either end of the Ying-Yang card. One end of the ying-yang card indicates that cards must be placed onto the pile with each card being a higher value than the one below. At the opposite end cards must be lower than the one before. You also lay out five character cards that are available to purchase and deal each player 5 coins.

Players take turns to play two cards from their hand – one onto the ascending pile and one on the descending pile. To play a card it must be the same colour as the one at the top of the pile and must meet the descending/ascending rule, or it can be a card of the same number as the top card, but of a different colour.

Meeting these rules gets tougher the further into the game you go, so you are able to purchase character cards that grant you powers that can help you bend the rules in order to enable you to place a card. For example, one card allows you to reverse the Ying-Yang card, making it possible to place a higher number where you previously had to place a lower one.

If you are unable to play a card and no character card can help you, then you must pick up the pile in question. Picking up cards may ultimately be your demise, as markers on the cards picked up are your score and the lowest score wins. So you really want to avoid pick-ups, but there is an up-side to picking up, as this causes you to get more coins.

After three rounds, that are played until all players are rid of their cards, you add up the points gained from the pick-ups and the lowest score wins.

I enjoyed this game, despite being thoroughly thrashed. The increase/decrease rules can be very frustrating, especially when your opponent plays the highest value card on the increase side and vice verse. There is a rule allowing you to go between 13 and one regardless of the increase/decrease rule, but we found that we never had the right card at the right time to make use of this rule.

The character cards are what make this game and the key is to make sure that you understand their powers and use them at the right time. The cards and pieces are a good quality with nice illustrations for the character cards in particular. There are illustrations on the playing cards, showing the Sakura tree blossoms, which although pretty, are a little confusing because the colours on the cards conflict with the colours of the numbers.

Instructions are provided in English, French, German and Hungarian and everything in the game is made up of images and numbers, which is a great idea for international distribution. The only down side to this is that you have to keep referring to the rules for the meaning of the character cards for your first few games.

There is a huge luck element in this game, which means it won’t appeal to all gamers as some like to be in total control of their own fate. It is fairly light and, other than having to remember the special powers of the character cards, easy to learn.

6
A simple, tactical game with an element of luck and easy to learn.
COMMENT AND DISCUSS
blog comments powered by Disqus