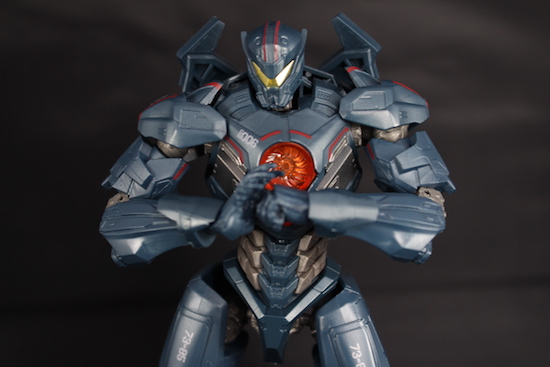 As a true love letter to both giant robots and monsters, it’s no surprise that the original Pacific Rim won the hearts of moviegoers across the world. Unfortunately, its accompanying toy line was a far more maligned affair, with NECA facing criticism for their detailed but poorly articulated and easily breakable figures. Fans dreamed that one day Bandai Tamashii Nations would get a chance at the license and with the release of Pacific Rim: Uprising their prayers have finally been answered.

While the iconic Jaegers of the original film are getting the masterpiece treatment from Bandai’s high-end Soul of Chogokin line, the new wave of kaiju-fighting robots are coming through the smaller, more affordable Robot Spirits range. These non-scale figures average around 6” in height and have so far included mecha from the likes of Code Geass, Eureka Seven, Full Metal Panic and of course the Gundam franchise.

However, for Pacific Rim, Bandai are tackling their lower-priced competitors head on and fighting them on their playing field. Gipsy Danger retails for around 2484 yen (£17), while the other five Jaegers are 3564 yen (£24). Even in the case of the more expensive figures, that’s nearly half the price of an average Robot Spirits figure. It’s clear that Bandai aren’t just targeting hardcore collectors with these - they’re going for the whole market.

Even though the price is significantly lower, none of that Bandai quality has been sacrificed. Though predominantly moulded in blue plastic with metallic grey used for the inner-frame/joint sections, Gipsy Avenger is covered head to toe in all manner of mechanical detailing. Panel lines, rivets, pistons - you’d be amazed how much of the CGI model they’ve been able to shrink down into a 7” (yep, it’s also taller than most of the line) figure. Where there is paintwork it’s been exquisitely applied, from the upper body’s red lining to the heads golden visor and various tampographs adorning the chassis. The icing on the cake however is use of translucent plastic for the visor and central chest reactor - both of which evoke a higher sense of quality as well as adding some much-appreciated colour variation.

The poseability the toy has is equally impressive, with Gipsy Avenger featuring (as the box so proudly labels) over 24 points of articulation. Ball joints in the head, shoulders, wrists and hips allow a wide range of fluid movement, while Bandai’s signature double-hinged elbows and knees provide a satisfying bend that will suit all manner of action poses. She’s definitely one of those figures where the more you handle her, the more surprises seem to be revealed. For example, not only can the legs swing outwards at the hips for even more clearance, but the entire crotch section can swing left to right for an even greater range of movement. The price immediately makes you think Bandai have just done a rush job and called it a day, but honestly this is one of the most flexible robot figures I’ve handled in all my years of collecting.

For accessories, Gipsy comes with an alternate pair of open hands, as well as her signature Gravity Sling and Chain Sword weapons. Each weapon is fitted to an alternate left and right arm respectively, with limb replacement as easy as popping off the arms at the elbow and then fitting the new one in its place. Swapping parts can be one of the most daunting things on figures like this, so I’m happy to report that it’s a really smooth process with no risk of breaking anything at all. Both weapons look fantastic, especially the Gravity Sling with its use of translucent blue plastic. Admittedly Robots Spirits usually do have a little more to offer in the accessory department, but for the price Bandai are charging for this figure she comes with more than enough.

Bandai Tamashii Nations taking on Pacific Rim is something fans have wanted for a long time, and Robot Spirits Gipsy Avenger was definitely worth the wait. This is the Robots Spirits line, as well as possibly Bandai as a whole, at their very best for only a fraction of the price. It’s still very early days, but I’m confident that Robot Spirits Gipsy Avenger will come out as one of the best toys of 2018.

If you're fan of highly articulated robots toys at a manageable size, you can't do much better than this. At £17 plus shipping Bandai are practically giving it away.