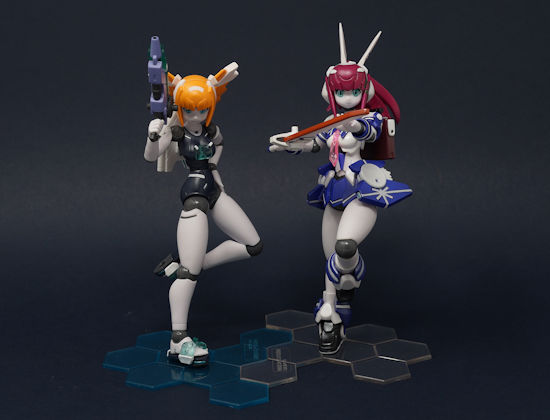 So here's a thing. On my last visit to Japan, I happened across the Yume figure in the Akihabara Mandrake, and I thought "oh, here's a cute thing - a robot schoolgirl! How Japanese!". I decided to pick her up on a whim, and enjoyed the figure, despite a few reservations which I'll come to, but nothing bad enough to put me off another.

Enter Mel - designed to resemble a girl wearing a Japanese school swimsuit, she was no less cute. Only once out of the box did I realise that what she actually is, is a diabolical bitch from hell, on a mission to wrench both my heart from my chest and the yen from my wallet. Seldom have been so disappointed by a figure, but ladies and gentlemen, Mel is here to break you.

But before we plunge into the depths of misery, let's examine the reason for our meeting at all - the school-outfit attired Yume figure.

Yume is predominantly white and blue, with some red accents. She has some lovely translucent plastic in her hair bow and the sword she comes with. Her proportions are pleasingly chunky, but still feminine enough to be enticing.

Her build quality is, however, questionable. The articulation of her arms and legs is handled by Revoltech-style ball joints, that require some twisting and experimentation to get her into natural poses. However, she does look great when everything "clicks".

Her waist was my first warning sign. She likes to pop apart, and frequently her hips will disconnect from her torso when you're trying to pose her. This is a frustrating experience, but manageable if you're patient.

Then there's her ponytail. This is a deceptively simple looking plug point. However, you just try plugging that bastard in. It requires excessive force before it'll get in there, and you'll likely drop the figure or see her waist shoot off for the 10th time before you see success. This is very poor engineering, but perseverance pays off.

Like most Polynian figures, she has accessories - 2 extra faces with different expressions, a variety of hands, a schoolbag backpack and a laser sword, because Japan.

In the end, I was left with a perfectly fun little figure that cost me about £30 and had a nice aesthetic. Frustrations aside, she was worth it, and I wanted to find her a friend. So we found Mel. What a bitch.

Mel is constructed much the same as Yume, so we won't go over all that again. She has twin ponytails in a pleasingly square/robotic design. So far so good. She also comes with a water pistol with some lovely translucent parts, extra cannon parts to build an even bigger gun, and a water float with 2 pegs that can fit on her bag, with the two swivel-pegs providing a contact point for the extra guns that give her shoulder cannons. F-In-A.

So I put the water cannon in her tiny mitt, which took a bit of force. And lo and behold, the handle snapped. Argh. However, it snapped in such a way that it had plenty of friction when reconnected, and subsequently she looked fine, even if the handle would never come out of that hand and the gun was broken. Not a good start.

I then tried to slide one of the extra cannons onto the float peg, and man it was tight. I was very careful, and then the peg crumbled at the base. Not snapped, not broke, crumbled. The plastic is absolutely shameful. Again, the peg was stuck in the gun and the float was broken. Balls.

Almost everything this figure was designed to accomplish, it fails to do. It's a complete disaster in terms of play value, quality control, quality of materials and design. In short it's bloody awful, and not even remotely worth the 4,000 Yen (£26) I splashed out on her.

To say this figure goes for over £100 on Ebay, you absolutely must not purchase it. Yes, she looks cute as hell, the colours are darling and the accessories pop, but do not be fooled, this is a disaster.

It's such a shame too, this could have been awesome. They look beautiful, they have a slightly chunky aesthetic that really appeals, and yet they can't be trusted.

Do not be fooled people, these are barely adequate for display and treacherous in the extreme. Don't waste your money, and if you're in Japan, don't pay more than 1,000 Yen, because believe me, they'll be clearing that much in a year.

2
Terrible quality and ultimately not worth your investment. Cute they may be, but they are also evil.
COMMENT AND DISCUSS
blog comments powered by Disqus