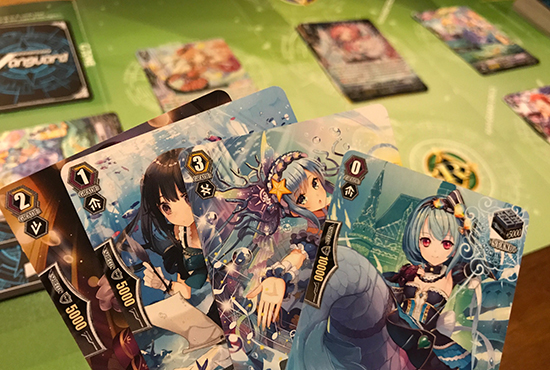 Last year I learned how to play Bushiroad's Cardfight Vanguard G! I am a life-long gamer, but had never previously delved into the realm of CCG’s. In case you are also new to Vanguard G, then here is a basic overview. At the end I’ll take about the new concept changes for Cardfight Vanguard too!

Cardfight Vanguard is a hugely popular card-fighting game that was originally created back in 2011 based on an idea by manga author Akira Itou. Although it started as a cardfighting game, it has since spawned a hugely popular anime series and a manga as well as constantly evolving it's rules and introducing Vanguard G, which I’m going to take you through here.

The premise is that you are transported to an Earth-like plant called Cray, where you use your units to do battle with an opponent.

Each turn proceeds as follows:

The game is won, once your opponent has six cards in their damage zone!

As well as the above process, you have the card special abilities to factor in! You won’t fulling grasp everything regarding the special abilities from the get-go and may need to keep referring to the rules to understand the symbols, but the basic game format is easy to pick up and the more you play the greater your understanding of the nuances of the game. Before you know it, you will be purchasing booster packs, building a unique deck and googling where your local CardFight events are taking place!

I have written up a more comprehesive version of the rules and tactics with detail on other aspects of the game in the articles section if you want to take a look here.

Recently, Bushiroad have refreshed the Cardfight Vanguard concept and although they are still releasing some product for Vanguard G, most of the new releases are now for the Cardfight Vanguard concept and are centred round the characters and their teams from the anime TV series. Trial decks are each based on one of the characters from the series and use the clan and units they play with on the show. Don’t worry, you don’t need to watch the show to enjoy the game!

In this new variant on the game G units are replaced with 'Imaginary Gift' cards in the trial decks, although it is possible to play with both conceots together if you wish. Each clan will work best with a different one of the three available and you are only permitted to have one type in your deck.

One more change to the game is the addition of a new trigger ability called Front. When this card is drawn, all units in the front row get the power increase for that combat (as indicated by the figure under the trigger ikon).

The artwork on the cards is awesome, with featured characters ranging from beautiful girls to chickens - yes I said chickens – I found one in the new Q4 booster box! More recent decks are centred round characters you may recognise from the Cardfight Vanguard anime series and the series can also offer great pointers on game-play too.

Trial decks are really reasonably priced, but the booster packs can start to make it a bit pricey, so before you order do your research and make sure you know what you are buying and ensure it will work with your deck. Be prepared to get addicted!!!

The changes brought in with the transition from Vanguard G to Cardfight Vanguard as well as some abilities becoming more simplified and easier to understand is designed to make the game easier to learn for players coming into it after watching the anime. So, as well as offering something new to existing fans it is enabling a whole new generation of players and making it easier to learn.

I may be new to CCGs but I must say I’ve really enjoyed learning to play Cardfight Vanguard. It was really baffling at first and I feel like I’m still only just at the start of my journey. The great thing is that you can just get on and play without understanding absolutely everything, although it’s best if your opponent is in the same position and not an international champion!

If you love your CCGs but haven’t checked out Cardfight Vanguard, are you mad? What are you waiting for? If, like me, you’re new to the concept, the new trial decks are a good place to start, just keep it simple to start with and work your way up to the complex stuff!

9
For CCG fans and newbies alike - a game with huge variety and collectable too!
COMMENT AND DISCUSS
blog comments powered by Disqus