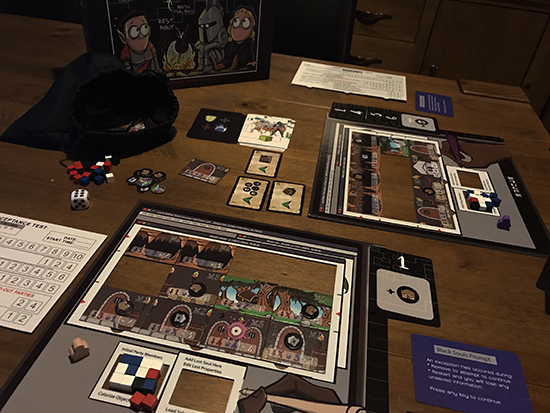 You are interviewing for a position at computer games company Design Inc. You are challenged with designing a level for their new game - ‘Black Souls’. Your brief is that the level must be difficult but also fair and it will be tested by seasoned play-testers to see if it meets the required criteria. If you succeed then a job at Design Inc is yours!

Each player gets the following:

In the centre of the play area you need to set up:

The game is made up firstly of the design phase and then the gameplay phase:

Design phase – this is made up of 12 rounds, during each if which you will add one asset to your design board to build your level. The process of gaining an asset works as follows:

As well as this there are some more intricate rules, bit I’ve given you a general idea of how the design phase works.

Gameplay phase – This is where the game-testers work through your level to test it’s difficulty and see if any of them make it to the end. To do this each player starts with their meeple placed at the first asset on the design board and they then work though the assets in order. This is where the coloured ‘Party Member’ cubes come into play. Each asset shows how many meeples it can kill off of each colour. You must choose who to eliminate from your party accordingly. For example, the asset may say it eliminates 2 Red or 3 Blue or 2 White from the party. Because you have a lot of White cubes in your party you may select to lose two White at this point.

Ideally after working your way through all 12 assets you should have some players left in your party. I can tell you from experience that this is easier said than done, but getting father than other plays will get you points even if you get wiped out.

Scoring – Following the Gameplay phase your performance is scored and points given for:

This game originated as a kick-starter project and interestingly its creators have now reached their funding target for Black Souls 2.0 and so there are a huge number of fans out there!

I can’t however say that I loved this game, I had quite a few issues with it. My primary concern is that it is incredibly hard to actually build a level that the players survive. I would personally recommend that the starting party members be 13-15 rather than 10-12. The scoring system is very complex with there being some scoring methods only open to you if you had players survive your dungeon and others only open to you if no-one survived. This makes it incredibly difficult to assess how you are likely to score throughout the game and therefore develop a strategy for play. This is however something that becomes easier with experience.

I also get the feeling that some of the rules (like the hack ability) have been added in to correct issues with the game after testing which makes them feel a bit random and can easily be forgotten about during play.

The rules are pretty well put together, other than a boob in the solo instructions where a graphic has been placed over a line of text during the publishing process, so it can’t be read and a lack of explanation for yellow cube images (there are no yellow cubes in the set so it took some investigation to find out that yellow indicates that you take the colour of your choice). There are also some images on the asset tiles that have no reference in the rules – I think they have something to do with the kick-starter version, but an explanation would have been nice.

Lastly, feedback that I have read online indicates that the game isn’t well suited to six or even five players (although pieces are supplied for this) as the fact that there are frequent clashes in the bidding phase spoils the momentum of the game – four is considered the most appropriate. To remedy this, I would eliminate the rule relating to the clashing in the bid phase. You would say that those players that clash go in the order indicated by the number they played, but that the pervious round turn order is used to decide who goes first and card abilities aren’t revoked (if you do this also take out the 0 bid cards, hack abilities and fair play bonus during the scoring).

There is also much to enjoy about this game. It is obviously designed for strategic game players and so it is intense and has enough complexity to keep you interested for multiple re-visits. The graphics are great with illustrations by Len Peralta, whose style you may recognise from Munchkin! It is very well made, with good durable pieces although it could have come with more bags to help store all the small pieces!

The game also has a solo mode (where you play against an AI) which I always like, because it allows me to learn the game alone before introducing my friends to it – we all know it’s better to learn a game by being taught it by someone who has learned it already. The solo mode rules dictate how the AI plays against you and are actually really interesting because they dictate a logical way to play the game and make decisions. I recommend that anyone take a look at these whilst trying to figure out how to get the best out of the game.

I didn’t hate this game, but neither do I love it. I actually found I enjoyed it much more and was a lot more successful when playing the solo version. This is probably because playing alone allowed me to completely concentrate on the dynamic. The key is to manage all the different elements of balancing level difficulty, gaining perks for the gameplay level and meeting the challenge of the quirk cards. This is definitely a game for more serious players who will take the time to thoroughly understand the dynamics and concentrate on strategy throughout. If you give it a go, I suggest you adapt the rules as I’ve explained above for at least your first few games.

A game of strategy where you are challenged to build a better computer game level than your opponents. Fun but has its issues!

6
A game of strategy where you are challenged to build a better computer game level than your opponents. Fun but has it’s issues!
COMMENT AND DISCUSS
blog comments powered by Disqus