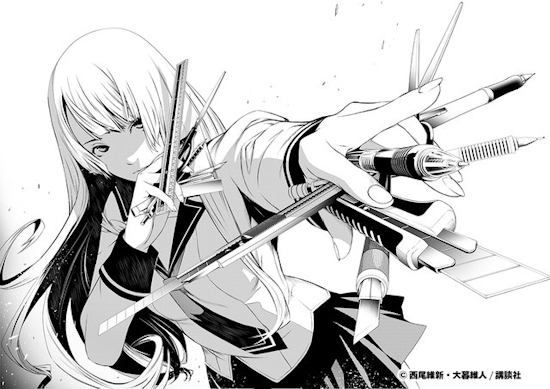 Japanese publisher Kodansha has announced a slew of new titles for the coming year from both themselves and Vertical, with some unusual books being added for good measure. Personally I'm looking forward to the artbook by Vofan, Colorful Dreams. Overall there are some excellent books in here, so let's go through the list: 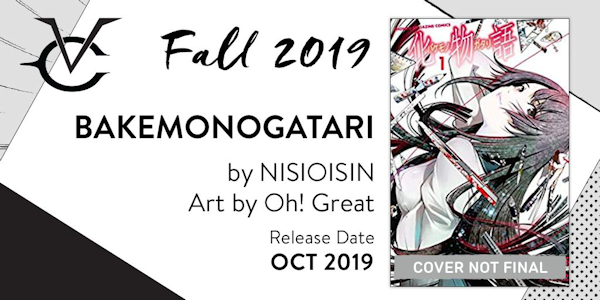 Bakemonogatari (manga) by NISIOISIN and Oh! Great
From the bestselling novel series by renowned author NISIOISIN, comes the manga adaptation of the MONOGATARI Series with fabulous artwork by manga legend Oh! Great, best known for his manga Tenjho Tenge and Air Gear, as well as the artwork for Biorg Trinity and character designs for Tekken 5, Tekken 6, and Soul Calibur IV.One day, high-school student Koyomi Araragi catches a girl named Hitagi Senjougahara when she trips. But—much to his surprise—she doesn’t weigh anything. At all. She says an encounter with a so-called “crab” took away all her weight … Monsters have been here since the beginning. Always. Everywhere. On sale October 2019 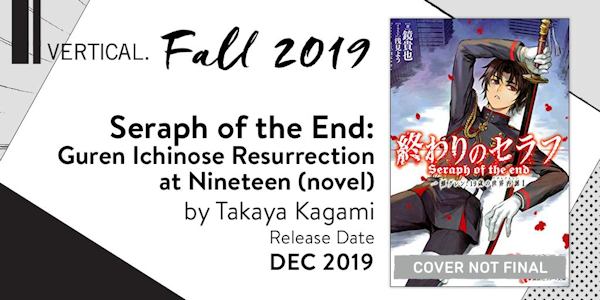 Seraph of the End: Guren Ichinose Resurrection at Nineteen (novel) by Takaya Kagami
Guren Ichinose has sinned. He broke the taboo on human resurrection. He tried to bring back his fallen friends and family with the Seraph of the End experiment. Now humanity once again faces destruction. The only survivors are demons and children. With the human population less than a tenth of what it was, monsters multiply across the earth and vampires hunt humans as prey. But the humans that remain cling on to the hope that the world will be restored.Keeping the knowledge of his crime to himself, Guren Ichinose must take a step forward once more. On sale December 2019 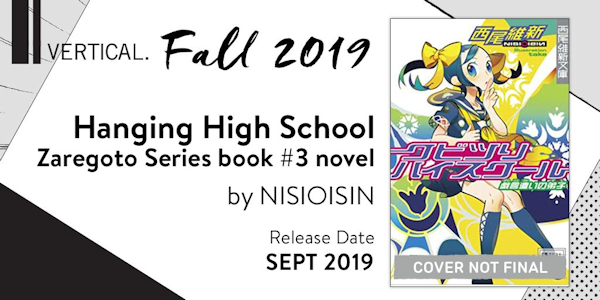 This June, an honest person who doesn’t like pipe dreams, who physiologically simply cannot allow even one contradiction to stand—namely, me—was dragged by the Most Powerful Entrepreneur In the World, Jun Aikawa, to the renowned private all-girls Sumiyuri Academy. And there was no point in me protesting.

The incident happened at the academy. You could say I was dragged into it, or that I leapt into the whirlpool. Well, whatever you say, however you explain it, there definitely isn’t any meaning in it. Everything that happened, after all, is nothing but nonsense—

The 3rd volume in the popular Zaregoto series, continuing the adventures of “I,” the anonymous Nonsense User. On sale September 2019 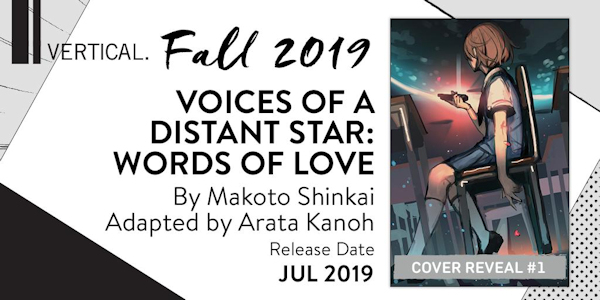 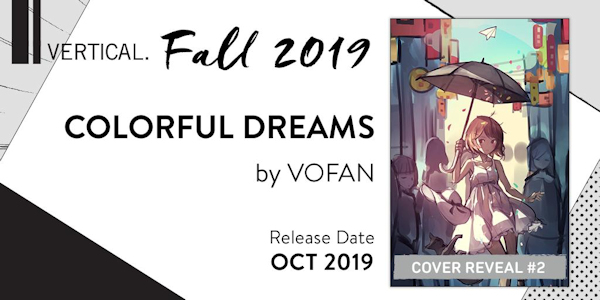 Colorful Dreams by VOFAN
From VOFAN, the star illustrator of the MONOGATARI Series (novels) written by NISIOISIN, comes a full color artbook of his best personal (noncommercial) works.Previously only published in Taiwan, this new edition will be updated with a brand new cover art, new artwork added and an extended interview with VOFAN.On sale October 2019 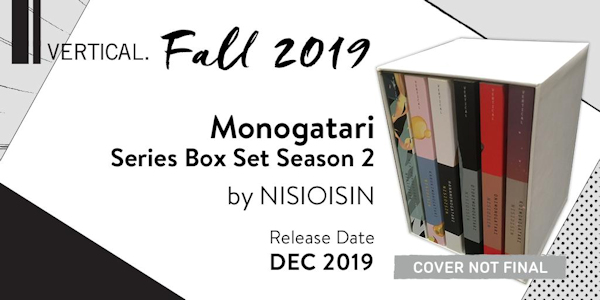 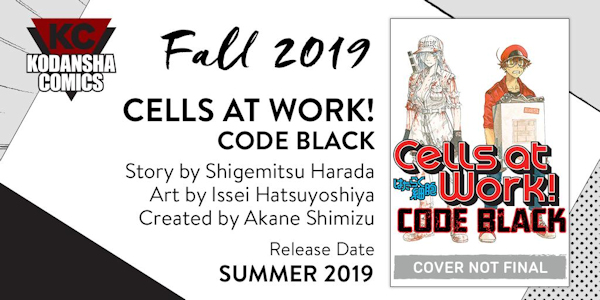 Cells at Work! Code Black by Shigemitsu Harada and Issei Hatsuyoshiya, based on the manga series by Akane Shimizu
In this new spinoff of the hit manga, a newbie Red Blood Cell is one of 37 trillion working to keep this body running. But something’s wrong! Stress hormones keep yelling at him to go faster. The blood vessels are crusted over with cholesterol. Ulcers, fatty liver, trouble (ahem) downstairs … It’s hard for a cell to keep working when every day is a CODE BLACK! The manga and anime Cells at Work! showed you what happens when a young, healthy body gets in trouble … but what if the body wasn’t so young and was never very healthy? This new take stars a fresh-faced Red Blood Cell and his friend, the buxom White Blood Cell, as they struggle to keep themselves and their world together through alcoholism, smoking, erectile dysfunction, athlete’s foot, gout … it’s literal body horror! Surgeon General’s warning: only for cells 18 years and up! On sale Summer 2019 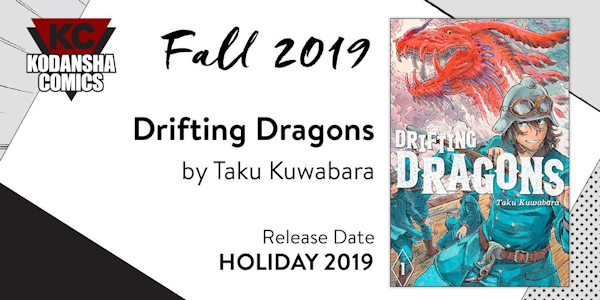 Drifting Dragons by Taku Kuwabara
The digital-first hit comes to print! Take to the skies with the scrappy crew of the airship Quin Zaza, as they hunt the fantastical giants that rule the skies of their world … DRAGONS! The daily routine aboard an airborne draking vessel springs to vivid life in this exquisitely crafted tale in the tradition of the lush, transporting fantasy of Hayao Miyazaki. Part travelogue, part imaginary cookbook, and part otherworldly slice of life, Drifting Dragons tells the stories of the Quin Zaza and the colorful band of misfits that makes up her crew. On sale Holiday 2019 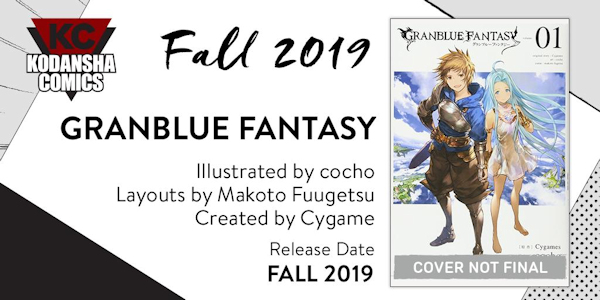 Granblue Fantasy by cocho and Makoto Fuugetsu; created by Cygame
The manga based on the acclaimed RPG, from the designers of gaming classics Final Fantasy V/VI/IX. Don’t wait for Granblue Fantasy: Relink to return to the world of Granblue! Ever since his father ran off in search of the mystical island in the sky, Estalucia, Gran has lived alone. Until one day, a girl named Lyria makes a daring escape from the army, ending in an airship falling off a cliff, and squashing Gran! When he comes to, he’s back in one piece, but he’s forced to join Lyria on the run. The entire world seems to be after the mysterious powers she used to revive him! On sale Fall 2019 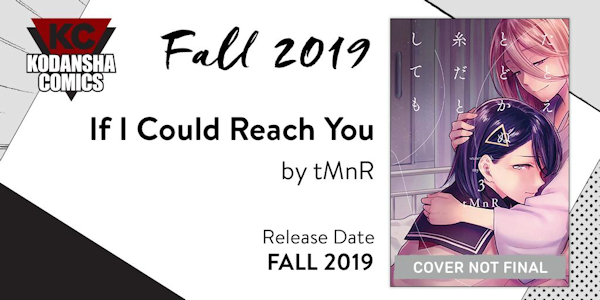 If I Could Reach You by tMnR
In this heartwrenching new yuri manga, a teenage girl comes to terms with her own sexuality through her crush on her brother’s wife. Kodansha Comics’s followup to our first yuri title that started in January, Yuri Is My Job! Hopelessly in love, high schooler Uta must navigate living with her brother and Kaoru, her crush … and sister-in-law. Desperate to get over her unrequited feelings, Uta pulls away, but when the cracks in her brother’s marriage begin to show, Kaoru begins to confide in her new teenage sister, which just makes matters worse! On sale Fall 2019 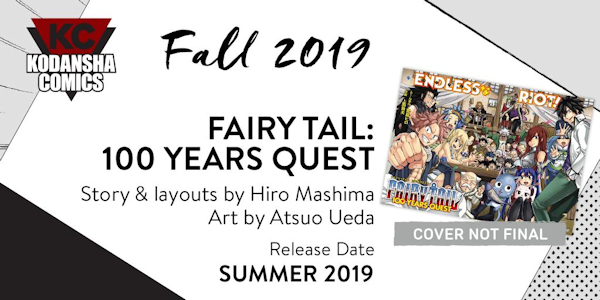 Fairy Tail: 100 Years Quest by Hiro Mashima and Atsuo Ueda
A wizard’s job is never done! Get fired up for the official sequel to Fairy Tail, with story and layouts by original creator Hiro Mashima himself. Natsu, Lucy, Happy, Erza, and the whole Fairy Tail guild are back in action! And they’ve decided to tackle the “100 Years Quest”—a job no one’s dared take on since the founding of the guild more than a century ago. A mysterious town, a baffling spirit, a ghastly new enemy … and a brand-new continent to explore. When you’re with real friends, the adventures never stop! On sale Summer 2019 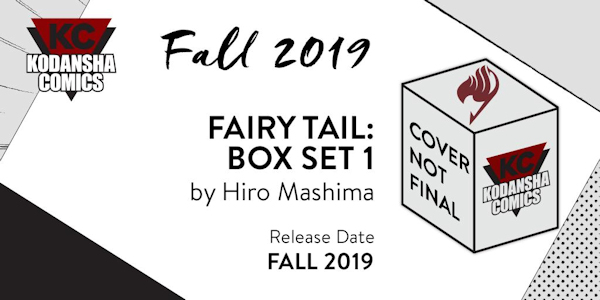 Fairy Tail Box Sets by Hiro Mashima
Your instant Fairy Tail manga collection! Stylish box includes Volumes 1-11 of the magical shonen adventure that became an anime megahit, plus a special bonus item. Two more sets will follow each year! Lucy is a young, rebellious celestial wizard with a dream: to join Fairy Tail, the world’s most rambunctious and powerful magical guild! When she happens to meet one of Fairy Tail’s top wizards, he turns out to be not quite what she expected: a slob traveling with a flying cat. But the promise of adventure is real, and together they escape from pirates and a devious magician! Their next task: to steal a book from the evil wizard-killing Duke Everlue, and outsmart his death trap. Eccentric new friends join along the way in this lushly-drawn modern classic! Box Set 1 goes on sale Fall 2019! 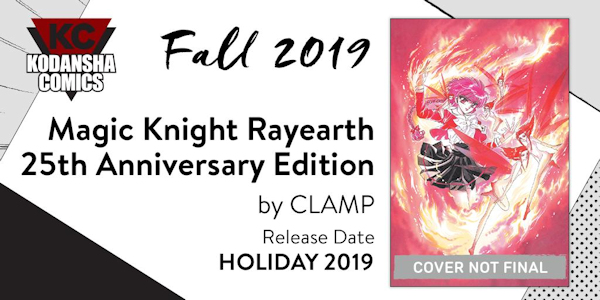 Magic Knight Rayearth 25th Anniversary Edition by CLAMP
This limited-edition hardcover box set contains the complete first arc of CLAMP’s classic Magic Knight Rayearth, with a new translation, new designs, and a color art book, all at a super-large size, with a stunning three-way lenticular print. The centerpiece of any CLAMP collection! The tale of three Tokyo teenagers who cross through a magical portal and become the champions of another world is a modern manga classic. This box set includes three volumes of manga covering the entire first series of Magic Knight Rayearth, plus the series’s super-rare full-color art book companion, all printed at a larger size than ever before, on premium paper featuring a newly-revised translation and lettering, and exquisite foil-stamped covers. A strictly limited edition, this will be gone in a flash! Box Set 1 goes on sale Holiday 2019