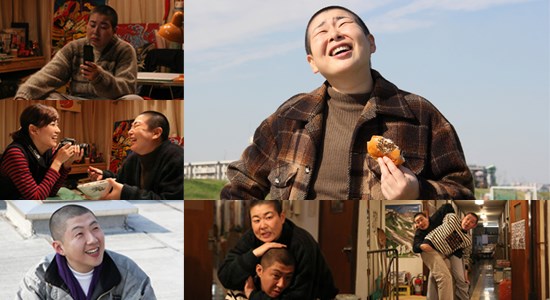 It’s been quite a while since Yosuke Fujita released his first feature length film - the charming comedy Fine, Totally Fine in which two childhood friends who haven’t quite grown up fall in love with the same kind of strange girl, but now he’s finally back with another feature following his short film Cheer Girls, which formed part of the Quirky Guys and Gals anthology film. Like those two previous efforts, Fuku-chan of FukuFuku Flats is another warm and funny tale of the strange lives of ordinary people.

The titular Fuku-chan (played by actress Miyuki Oshima) is a painter and decorator and something of a parental figure at the small block of modest apartments at which he lives, FukuFuku Flats. As well as defusing work place disputes - including one character breaking wind in the face of another to try and wake him up after lunch - and others at home such as two neighbours disagreeing about the ownership of an exotic pet, Fuku-chan lives a fairly quiet, solitary life. On the other side of the story, a once high-flying executive, Chiho, has quit her lucrative and steady job to pursue a career in photography only to discover her idol and mentor is interested less in her artistic attributes than her physical ones. As you might expect, the path of these two characters is destined to cross - however an unlikely pair they may seem. In fact, as it turns out they share connection that for one of the them has become a long buried memory, but for the other is an unforgettable scar that has coloured the rest of their life.

The more observant among you may wonder if there’s a mistake in the above paragraph. The titular Fuku-chan is indeed a male but the character is being played by the popular Japanese comedienne Miyuki Oshima. Though this is by no means the first time that an actress has portrayed a male character on screen (Linda Hunt even won an oscar for playing a male photographer in The Year of Living Dangerously) some viewers may initially be thrown by the decision. Fuku-chan’s shyness, caring nature and reluctance when it comes to dating women might, after all, be explained if ‘he’ were in reality a ‘she’. However, that is not where our story takes us and a joke about the size of Fuku-chan’s ‘maleness’ is perhaps designed to reassure us about his true nature.

As with Fine, Totally Fine, Fujita’s world is packed out with eccentric characters and instances of everyday surrealism. From the the completely crazy ‘avant-garde’ photographer with his strange dress sense and giant camera wrapped up in some kind of alien-like yellow suit, to the owner of an Indian restaurant who’s philosophically opposed to the idea of drinking water whilst ‘enjoying’ a spicy curry these are some very strange people, but crucially the sort of strange you might just come across in your everyday life - they never feel contrived or deliberately bizarre, just people that are little abstracted from the norm. Also to the film’s credit is that the characters’ individual quirks are just those - amusing as character traits, but not ‘jokes’ in and of themselves.

There is, however, a slightly dark undertone to the film. The traumatic incident that binds the two central characters together is of a fairly ordinary variety, a typical sort of thoughtless teenage prank that happens everywhere, everyday (in fact, something similar happened to the author of this review in the dim and distant days of their youth). Its ubiquity doesn’t make it any less cruel and even if it wasn’t exactly malicious in its intent, the effects of such humiliation can have an enormous effect on the rest of someone’s life. It’s not hard to see how such an experience could make someone bitter, withdrawn and misanthropic and it’s testament to Fuku-chan’s innately warm nature that his ability to help others remains undimmed even if he keeps himself in protective isolation. Conversely, you have to accept that some people’s problems are in need of more specialist care than even the kindest of hearts can provide, no matter how much you may want to help them.

Fuku-chan of FukuFuku Flats is another excellent entry in the ‘human comedy’ genre. Warm, genuinely funny and in the end even a little moving, it’s impossible not to be charmed by the film’s whimsical, absurd world. Though darkness sometimes creeps in around the edges, it only makes the light seem brighter and actually adds a little real-world turmoil to Fuku-chan’s otherwise innocent world. An unconventional (not quite) romantic comedy, Fuku-chan of FukuFuku Flats is nevertheless a masterclass in the genre and genuinely one of the most fun films to come out of Japan (or anywhere else for that matter) for quite some time.

Fuku-chan of FukuFuku Flats will be screened as part of the 2014 Raindance Film Festival on 30th September and 1st October 2014, and will be released by Third Window Films at a later date.

8
A suitably warm and satisfying follow-up to Fine, Totally Fine, Fuku-chan of FukuFuku Flats is one of the funniest and most touching Japanese comedies in recent times.
COMMENT AND DISCUSS
blog comments powered by Disqus