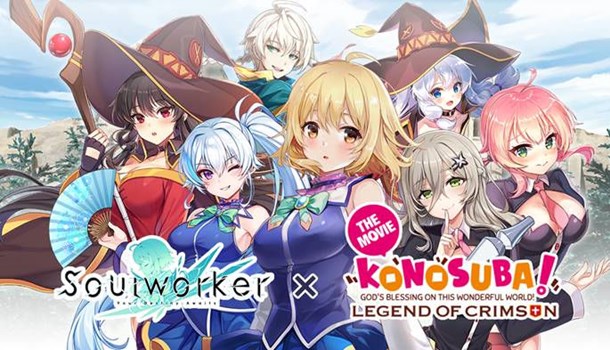 In line with most crossovers, the special event will allow you to raise money, attain unique KonoSuba themed items and take on unique missions from the "Vagabond of Wonderful World" event.

“Along with our newly added character Lee Nabi in July, our game greets fans with nine unique and distinct characters,” saidYongNam Jo, SoulWorker product director, Lion Games. “We hope that this first-ever collaboration will be a great gift to our global fanbase. We have been putting a ton of work to implement KonoSuba into the world of SoulWorker so our fans can enjoy a KonoSuba twist on our MMORPG. We are working endlessly to add more collaborative-focused content in the future that our fans will love – stay tuned for more.”

SoulWorker is being serviced through the global digital platform Steam in both Traditional Chinese and English. With anime-inspired graphics, action combat systems based on the game’s classes, and nine unique characters, SoulWorker has so much to offer than ever before. Following the collaboration, Lion Games has many updates coming, including new Raid “Violent Sun.” All detailed information can be found on the official Steam page and Lion Games’ official SNS accounts.

SoulWorker is an anime-style third-person action MMORPG available for PC gameplay developed by Lion Games. Set in a post-apocalyptic world, players take on the role of a SoulWorker, who are chosen as one of humanity’s saviors. Over 100 PvE districts and episode bosses await the young heroes, and after battling through the AI and guilds, players can then face one another in the extensive PvP zone. A unique emotion system that includes vengeance, madness, euphoria, or sadness defines and powers each of the characters’ abilities. Concentrating on these emotions activates abilities that boost effects for Defense or Attacks while using class-specific Soul Weapons.

SoulWorker can be played free of charge on STEAM.