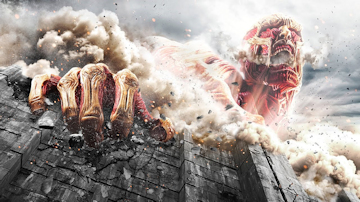 Not long after Anime Limited had delivered their slate of announcements, next up were Manga Entertainment and Animatsu Entertainment who also had to plenty to discuss and reveal within their thirty minute panel courtesy of Jerome Mazandarani and Andrew Hewson.

To kick off with some big news - Dragon Ball Z Resurrection F will be coming to a "substantial number" of cinema screens from Manga Entertainment in September, just four weeks after its US theatrical release. If you pre-order a ticket for a screening (with dates and locations to be announced online soon), you'll receive one of two Limited Edition figures previously only available in Japan.

Next up was a trio of announcements courtesy of Kaze - we already knew that Magi: The Kingdom of Magic was coming to the UK, but this will be arriving over two volumes on DVD and Blu-ray before 2015 is out.

Also announced is two DVD-only Kaze releases - Coppelion and World Conquest Zvezda Plot will both be released on November 2nd.

Back to Manga Entertainment, Danganronpa will be released on DVD and Blu-ray as a Complete Series Collection on November 9th.

There's also news for Naruto fans, with confirmation that both Road to Ninja and Naruto Movie the Last will both be coming to the UK on DVD and Blu-ray, while the fifth Naruto Shippuden movie will also be getting a standalone Blu-ray release to complement its previous DVD release. Incidentally, the distributor has now sold almost half a million Naruto DVDs in the UK.

Also confirmed from Manga Entertainment is that Noragami is coming to the UK as a Complete Series One Collection - release date is to be confirmed on that one.

Animatsu Entertainment also had some big news - Samurai Jam: Bakumatsu Rock will be arriving on DVD and Blu-ray on October 19th, while both the Beyond the Boundary's TV series and (as hinted at) subsequent films have been acquired by the distributor. The TV series is slated for a 2015 release.

The distributor has also snapped up Mamoru Oshii's live-action film Garm Wars: The Last Druid for a Q4 2015 release, while the previously announced first Parasyte live-action movie will be arriving on DVD and Blu-ray in early November 2015.

Last but certainly not least, the first live-action Attack on Titan movie has been acquired by Animatsu Entertainment for a theatrical release in October 2015, with a home video release to come early in 2016.

In the panel's question and answer session, Jerome suggested that Assassination Classroom has already been acquired by another UK distributor, while expressing his interesting is licensing Haikyuu.