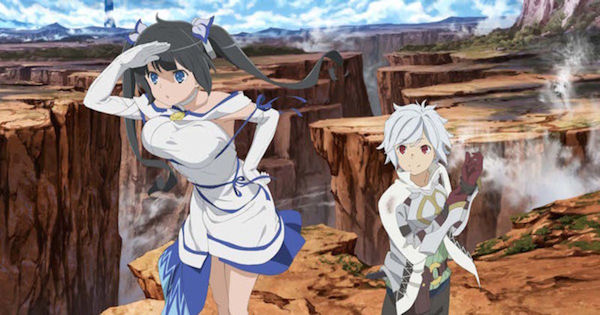 MVM Entertainment have used this weekend's MCM Expo as a platform to announce some new releases for the coming year. Take a look at trailers for every one of the titles below!

Domestic Girlfriend tells the story of the conflicted feelings of Natsuo towards his first love and the girl he lost his virginity to; the controversial and conflicting nature of romantic relationships between step-siblings and also between a teacher and a student while highlighting the themes of youth, family, friendships, learning, growing up, and career.

Unlike some of the other announcements, this already has a translation and dub courtesy of Hidive, so should be an early 2020 release.

The film is the third part of the Heaven's Feel trilogy, and will premiere in February 2020 in Japanese cinemas. Therefore it's safe to assume that this will be released late into 2020.

The continuing tales of Bell Cranel, an aspiring adventurer with a bevvy of admirers. Harem comedy anime set in a fantasy world which has already been confirmed for a third season in July 2020. Fingers crossed MVM makes it a hat-trick.

The anime adaptation of the racing game, this is a "mixed media" project from Kadokawa. Only starting to air in Japan this month (October) this should be a mid-2020 release.

Kandagawa Jet Girls is set in a near-future world where high school girls compete in tandem jet ski races where one racer, the Jetter, steers the vehicle while the other racer, the Shooter, hangs off the back and attacks their opponents with squirt guns.

In this setting, Rin Namiki, a girl from the countryside whose mother was a legendary Jetter, moves to Asakusa, Tokyo in order to pursue her racing dreams. There Rin meets Misa Aoi, a cool and beautiful girl, and the two become partners in a racing duo known as the "Kandagawa Jet Girls". Together, they bond as a team while taking on all challengers.

Maidens in your Savage Season

The girls in a high school literature club do a little icebreaker to get to know each other: answering the question, "What's one thing you want to do before you die?" One of the girls blurts out, "Sex." Little do they know, the whirlwind unleashed by that word pushes each of these girls, with different backgrounds and personalities, onto their own clumsy, funny, painful, and emotional paths toward adulthood.

Ready, aim, fire! Rifle is Beautiful, a TV anime based on the 4-panel manga by Akki Sarumi about a group of high school girls with a passion for the competitive sport of "beam rifle" marksmanship. The first episode aired on October 13th in Japan.

The story is set in the future where humanity and the Z/X has entered a treaty and headed towards moment of peace. Azumi Kagamihara—a girl affiliated with the Blue World—is chosen together with her Partner Z/X Rigel to enroll in Fujimisaki Academy, a school established to gather girls that was partnered with Z/X from all over Japan.