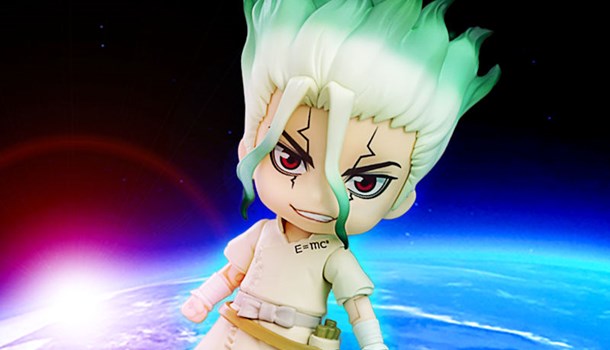 
Here's a fun one for a Friday!

Anime companies Crunchyroll and Kaze teamed up with Sheffield-based company Sent Into Space Ltd to send a Nendoroid Senku 35,032 metres into the atmosphere by strapping him to a hydrogen-filled weather balloon.

Nice to see a truly international effort to make a fictional characters dream come true in the name of grabbing your attention. More daft stunts like this please Crunchyroll!

Dr. Stone is of course streaming on the Crunchyroll service.

After several months of work in close collaboration with TMS Entertainment, Good Smile Company and several partners in Japan, Senku, the lead character from the Dr.STONE series,  was lifted into space from a field in Sheffield by Sent Into Space, a company founded in 2010 by two mechanical engineering students.

At the peak of his journey, more than 35km above the earth, the temperature was -65°C and the pressure was so extreme that the hydrogen balloon went from the size of your arm to that of a two-storey house. At that point, it burst and Senku began his descent.

Initially, he hurtled down to earth at speeds of up to 150mph, but on re-entry to the Earth’s atmosphere, the parachute took effect.

“He descended at a gentle walking pace as he touched down,” explains Sent Into Space’s Business Development Executive Alex Keen. “Senku was taped securely onto a pedestal, and landed intact.”

Senku was equipped with two GPS tracking devices and two cameras which filmed the entire journey and captured him in the inky blackness above the earth’s shimmering blue atmosphere alongside the Crunchyroll and Kazé logos.

“Sending Senku into space was a challenge and the final result is several months of work between our French and American teams and our partners in Japan. All this to tell you to watch Dr.STONE on Crunchyroll and on DVD and Blu-ray at Kazé,” says Crunchyroll’s Social Media Manager Bastien Guetta.

When he reached near space, Senku said: “This is exhilarating. Senku here. Thanks to you guys, my figure made it into space. You all get 10 billion points. Hopefully, we can eat some ramen and wash it down with cola. Listen up, the anime is currently on Crunchyroll, and don’t forget the Blu-Rays and DVDs from Kazé. Anyway, guess you guys are gonna have to wait while this thing comes back down to Earth.”