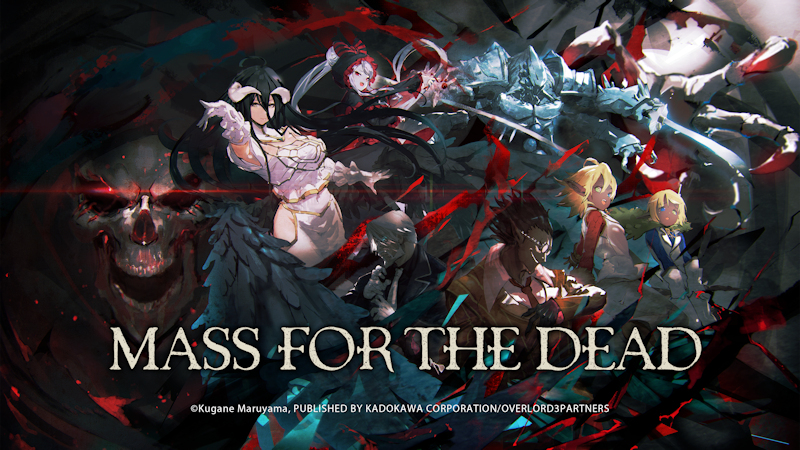 Crunchyroll games has launched another mobile RPG project, Mass for the Dead is based on the popular Overlord anime, making it the first game to be based on the series.

You can find all the details on the official website.

The game launched early last year in Japan surpassing 4 million downloads to date and the game will feature turn-based command battles, competitions alongside friends, double speed and auto-mode capabilities to battle against enemies.

“Mass for the Dead” reached 100k in pre-registrants and social followers. All players will receive the max tier of 1,000 Chaos Stones as a reward when they install the game for a limited time. Fans will have the chance to step into the shoes of their favourite “Overlord” characters including Momonga and Albedo:

Momonga - He is the avatar of Satoru Suzuki, an office worker who was working at a company that exploits its employees, and the guildmaster of the DMMO-RPG 《Yggdrasil》 guild 《Ains Ooal Gown》. At the time when the service of 《Yggdrasil》 ended, he was transported into a different world in this form. He is a frightening skeleton magic caster who has a bone structure of an adult man and wears a black and Amethyst robe with golden trim. He has entrusted his diplomatic agent assistant with gathering information about the cracks and the world, and to prepare for this unusual situation, he himself is giving top priority to the reconstruction and fortification of the Great Tomb of Nazarick.

Albedo - One of the NPCs who served the 41 Supreme Beings, she is the Overseer of the floor guardians of the Great Tomb of Nazarick. She was created by Tabula Smaragdina, a member of 《Ains Ooal Gown》. She is skilled in administration, and she is capable of managing all NPCs of Nazarick by herself. She's a perfect beauty wearing a stunning white dress, but she also has an unfortunate side…

The Japanese “Overlord” voice actors including Satoshi Hino, Yumi Hara, and Sumire Uesaka will make voice appearances in the game alongside English subtitles.

The game is available in North America, Oceania, and Europe (including the UK) and is available on App Store, Google Play, and Amazon.

This game is part of Crunchyroll’s broader commitment to building out a full slate of 360-degree experiences to deepen the community’s engagement with their favourite shows.