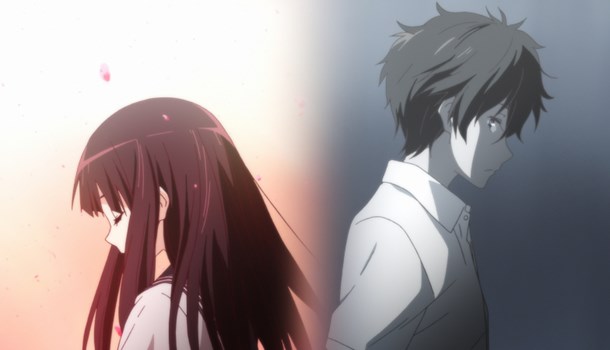 
The final day of this May's MCM London Comic Con brought us another panel from Anime Limited. Following Friday's panel and its focus on theatrical anime, today was more focused upon home video releases - let's dig into the details.

First up, the distributor has confirmed that they'll be bringing Kyoto Animation's Hyouka to UK home video. Part 1 will arrive in DVD and Collector's Edition Blu-ray formats in 2017.

ERASED Part 1 has been scheduled for a Q3 2017 release, featuring the first six episodes of the series with text-free opening and ending credits and two episode commentaries on-disc, while the release will also include a 92-page art book. The design of the release is still awaiting approvals, but the set will retail with an SRP of £39.99.

Later this year, the company will be bringing Studio BONES classic series Wolf's Rain to Blu-ray in Collector's Edition form. The release is currently scheduled for the fourth quarter of the year.

Away from home video, Anime Limited have penned a deal to bring anime back to UK television via the Viceland TV channel, with both Eureka Seven and both seasons of Tokyo Ghoul set to air on the service. You can find Viceland in the UK on Sky channel 153 as well as Sky's NowTV digital service. There's no news on whether these series will be broadcast dubbed or subtitled, but it's more likely to be the former.

In the subsequent question and answer session, Jeremy danced. Just as importantly, it's confirmed that there's no word on Anime Limited releasing Evangelion 2.22 and Evangelion 3.33 along the lines of the first film released earlier this year, although they would like to if the rights to those films become available.

There's still no news on Anime Limited's release of Turn-A Gundam, but Mobile Suit Gundam ZZ is still on track for release later in 2017. Further Mobile Suit Gundam titles beyond these two are in the works, but there's no information at this time.

There's still no further word on the distributor's release of The Melancholy of Haruhi Suzumiya Season 1 - this has been complicated by Funimation's US release also containing Season 2 to which Anime Limited don't have rights, so they're still investigating authoring their own discs or other contingency plans.

Marketing Executive Jeremy Graves also commented that Fairy Tail is selling consistently strongly after its return to UK home video on DVD - a comment which matches our own insight into sales numbers, which often sees Fairy Tail and One Piece trading blows in terms of sales numbers.

Finally, Mr. Graves declined to comment when asked by a writer for another site who the best UK-based anime journalism outlet is. We might be biased here, but...