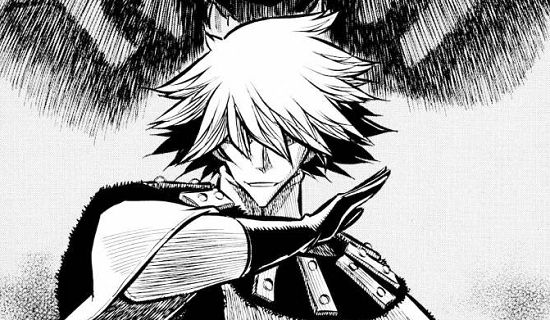 There's a quote accompanying the blurb to Vol. 3 of Wolfsmund that's quite illuminating. Cherry Blossom Reviews enthuses, "This is seinen and you won't get angsty teenagers dealing with stuff or magical girls saving the world. Here be adult stuff". You can see it in the casual misconception that "seinen" is a synonym for "mature" when the Japanese characters themselves actually mean "young" - a psychological challenge like Liar Game is seinen, but so is the juvenile schlocky nonsense of Elfen Lied. They both ran in the same magazine!

The emphasis on its "seinen" quality says a lot about the attitude that Wolfsmund has been written with and how it's being presented too. It's quite a vivid throwback to the early days of Manga Entertainment when it carved out its niche with edginess and marketed sex'n'violence to fill the cavity.  This stuff is not so much mature as it is adolescent, bubbling with those hormones that just want to lash out at everything, but in fairness it's important to keep in touch with our inner teenager as much as our inner child, too, to keep our spirits high and our energy active. Is it a breakout to new heights or just a rebellion without a cause?

When we last left Wolfsmund the coldly calm, creepily ingratiating figure of Wolfram remained king of the castle at the black keep of Wolfsmund castle. He continues to blockade the St. Gotthard Pass, bottling up the Swiss cantons inside the mountains and leaving them helpless before the oppressive domination of the Habsburg empire, and the rotting corpses swaying in the wind from the gallows outside the gate is a grim testament to the brutal efficiency with which he maintains that barrier. However, the first cracks are starting to be chipped into the wall - although it has cost them dearly with the loss of many comrades, the rebels of the Eternal Alliance of Switzerland have managed to get critical information, funds and supplies over the perilous border and are now ready to launch their revolt against the Habsburgs and regain their independence. With the Duke of Austria having to call his army north to fight the Bavarians, there will be no better time to strike - Wolfram always seems to hold all the cards, but now his supposed brilliance will be truly put to the test. Will he hold his own when there aren't the big boys at his back?

There isn't too much to say about the plot of these volumes, as most of both volume three and four is a lengthy battle sequence as the Eternal Alliance attack and besiege Wolfsmund castle and the feint and parry of the first two volumes is discarded completely. There are, however, some odd decisions. In volume three, in order to get Walter back into Switzerland to deliver the final plans for the Swiss revolt two of his comrades Albert and Barbara stage an attack on Wolfsmund as a diversion to let him slip back over the mountains undetected. This plan is rather silly, as Walter's not just slipping through a doorway while Wolfram looks in another direction, he's many miles away climbing over savage peaks. Even if Wolfram did cotton on to it, what could he expect to do about it? Given the distances involved and that just two people make an attack that's over in fifteen minutes at the very most, it would have been impossible for either action to have had an effect on the other and poor Albert and Barbara sacrificed themselves for nothing - which is a shame, as they were a lively pair with good rapport that fitted well together.  A similar problem interrupts volume four - the Eternal Alliance win the first part of the battle and capture the satellite forts of Wolfsmund, leaving Wolfram and his garrison bottled up in the keep - they could just knock through the walls of the forts and go around the keep at their leisure, but instead continue trying to batter down the keep instead. There is something to be said for there being not much time to break through as the Eternal Alliance have to open the pass before the Habsburg army arrives, but if the Eternal Alliance expended half the effort on digging as they did on wild suicide charges against the gates then before long they'd have been whistling and strolling through while Wolfram fumes impotently.

Still, however illogical the decisions themselves may be, it can be forgiven as it does give us an excuse for a good amount of entertaining action. Kuji's art is absolutely excellent for action sequences. Her sharp, hatched style slides into fast motion with cutting ease, carrying you up with chasm-vaulting leaps and crushing your down with thundering avalanches - Kuji is very skilled at investing still images with a sense of movement. Her holly-thorn blood effect also works very well to enunciate this, particularly in the mountaineering scenes when Walter is sliding down a rope and the blood from his burning hands whips around the rope in a spiral above him - it's a whole scene implicit in just one frame. She has an excellent sense of perspective, particularly in how she depicts fat, heavy crossbow bolts arcing towards the reader, and whereas in other manga motion lines can be intrusive, with her hatched shading they fit in smoothly; she also employs them for other purposes, for instance in evoking reverberating sound when a crowd is cheering and sweeping characters with the blast of explosions (and seeing Wolfram's hair flip out when something for once surprises him did raise a snicker).  Straightforward details are also depicted with loving brutality - seeing molten lead literally melt through the Swiss is delectably gruesome. Such a sight seems almost fantastic and unreal though - yet Kuji continues to be uncompromisingly cruel with more common suffering as well, with a brutal twist-by-twist scene of a soldier being strangled as his tongue swells and veins pop - and then there is a whole chapter dedicated to nothing other than Wolfram's protracted killing of Walter's mother and brother which is in the manga for no reason other than pure, unadulterated torture porn.

While the violence continue to hammer in unabated then, the force of it seems to have muscled out the sex. There was a heavy amount of sex in the first two volumes of the manga, but in these releases the sexual content has been dialled back to nearly nil, really being limited to just a single splash page of Goodwife Hilde being fed a beef sandwich by her two strapping cow-hands (it really does sound just like a Mills & Boon novel).

The setting of this action does finally though give Wolfram an opportunity to exercise those "magnificent bastard" qualities that were promised but never actually delivered in the first two volumes. Wolfram does acquit himself competently here as he villainously toys with Walter's family before throwing them to the wolves, and in the battle sequences confounds Swiss attempts to break into Wolfsmund demonstrating the seven P's that "Proper Prior Planning Prevents Piss-Poor Performance". A sequence where the Eternal Alliance try to infiltrate Wolfsmund by flying a kite over it is very tense, effectively inching closer with each panel with a quite mood of held breath. An interlude focusing on the Habsburg's fight against the Bavarians features - along with one of the finest moustaches in manga - the simple but tellingly cynical moral that commoners' patriotism is only as firm as the sword of their lord (reminding me of the conspicuously anonymous "smallfolk" of Game of Thrones as battles wheel around above them) and that it's only those who already have wealth and something to lose who get agitated (something that's a reasonable observation in our own day, as the middle-classes can make the angriest revolutionaries). Other character moments are a little thin on the ground and don't expect much in the way of development outside of Walter's frustrated and confused teenage mixture of desire, propriety and honour in his first dialogue with Hilde.  Interestingly, and with commendable narrative efficiency, the Habsburg knight who had his teeth knocked out back in chapter one gets his own face and returns in these volumes as a character in his own right. Reminding us that historicity isn't Wolfsmund's strength though I fear that this Berchtold may be confusing his knights with his samurai - whatever his opinion on "knightly custom", I'm pretty sure that it was never chivalrous to behead surrendered foes, however respectful the chopping was - but with his scarred cleft lip he does make an intimidating lieutenant to enhance Wolfram's presence.

There is an issue with how these characters are expressed, though. It may seem to be an unusual problem to focus on, but a significant irritant throughout Wolfsmund is lettering. Having dialogue be stuck inside speech bubbles originally designed for the radically different Japanese writing system here

because it makes dialogue

In this age of digital masters, would it be possible to obtain the plain art so that new speech bubbles can be added with better shapes to fit English text?

Volume four ends with a curious little side-story, leaving behind the medieval world of Wolfsmund entirely and taking us forward to the Renaissance, with a few pages of the Swiss Guard protecting the Pope from marauding Landscknechte. It seems to have been inspired by Kuji going on holiday to Italy, and it maybe says something about her that instead of bringing home photos and a fridge magnet she was inspired to lash on the page another bloody battle scene!

In final summation, Wolfsmund isn't as sophisticated and intelligent as it's been promoted as - however, it's not entirely fair to call it pretentious because it's not all hot air, there is something of substance in there. It's lost the sex but made up for it with the violence, effectively maturing into a confident, muscular, hard-hitting actioner. There has been a loss of fuel as its hot blood is no longer stoked by lust, but it has tipped in a pile of adrenalin to keep it burning.

7
Not so much squick, but heaps more grit.
COMMENT AND DISCUSS
blog comments powered by Disqus