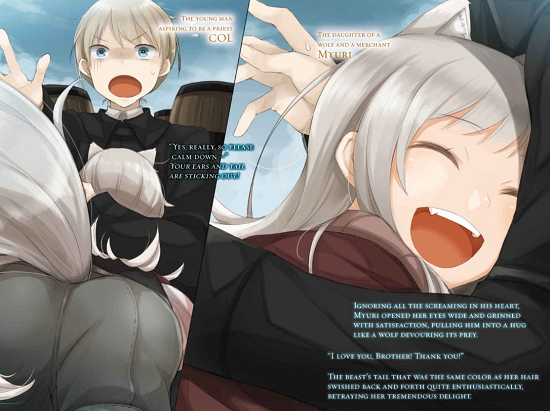 Spice & Wolf surely needs no introduction: the multi-million-selling light novel series is a household name. It is striking for its offbeat, atypical story of a fantasy land not filled with played-out tropes of swords’n’sorcery but a thoughtfully engaging progress of its hero selling and trading across its exchanges and marketplaces; and it is memorable for the protagonist’s Lawrence’s companion Holo the Wisewolf, a pagan harvest goddess who wasn’t willing to wait to be forgotten by the changing world and instead explored it beyond her ken – at once smug and coy, sultry and comely, and smart and cool she was an inimitable and indefatigable character, but most importantly… had a lusciously fluffy tail to stroke!

Spice & Wolf’s steadier tone and ingenious topic gave it more solidity than the ephemeral pulp of most other light novels and it’s readily agreed to be part of the canon of literary anime & manga stories. Publisher Yen Press even understood that Spice & Wolf could have appeal outside the otaku ghetto, commissioning new covers with real-life models for the early English-language releases to get them off the bookstore manga shelves and into mainstream fiction (even if it did sadly provoke a violent backlash from the fanbase, to the extent that Yen press gave out free dust jackets with the original anime-style covers to appease them). Spice & Wolf would be a hard act for anyone to follow, and with the original story being twenty volumes long and ending quite definitively with Lawrence and Holo settling down to lovey-dovey domestic bliss and mixed bathing in a hot springs resort it might already seem to be quite comprehensive with nothing more left to say.  The original author Isuna Hasekura and illustrator Ju Ayakura however do believe that there is more to be explored in their world, and in 2016 they partnered up again for a sequel, Wolf & Parchment, which currently has three volumes published, the first of which we’re looking at today. Subtitled the “New Theory Spice & Wolf”, is Wolf & Parchment a useful product made with entrepreneurial spirit that will fulfil their customers’ needs, or is it just a cynical sawdust-bulked cash-grab flogged by a pair of rogue traders?

Wolf & Parchment returns to the peaceful mountain village of Nyohhira, where Holo & Lawrence settled down to build their bath-house business at the end of Spice & Wolf. A decade has passed, and their young daughter Myuri is growing up into a mischievous minx of a half-wolf who’s still loved by the villagers for her vivacious, enkindling spirit. Another friendly and familiar face is Tote Col, who Spice & Wolf fans might remember as the naive boy rescued by Lawrence & Holo from a terrible swindle all the way back in the original's Volume 6. Col has been promoted from bit-part to lead role, and he’s now the central protagonist of Wolf & Parchment. He repaid the debt of generosity owed to his two benefactors by joining them in their bath-house, working so closely together he was more one of the family than a mere employee and something of a surrogate brother to Myuri – but now ten years later Col has grown up into a man and is ready to strike out on his own. With the blessing of Lawrence & Holo, Col departs his adoptive home of Nyohhira on a river barge to sail into the wider world… only to discover that his luggage is overweight, as a barrel bursts open and Myuri comes tumbling out! She’s desperate to escape her small isolated hometown and stowed away to join Col on his adventure, whether he likes it or not!

However, Col’s journey downriver is no mere pleasure cruise. Myuri doesn’t really understand Col’s bookish, pious ways thanks to her cheerfully heathen upbringing, but it’s something dearly important to him as he’s planning to enter the seminary and become a priest. Again, though, Col does not want to be a mere country parson but a true zealot. He despairs of the venial decrepitude of the modern church – its laxity and indulgence, its embezzling of tithes – and is determined to lead a purer, more inspiring life, breaking the corrupt institutional power of the priests and bringing people closer to God by translating the holy scriptures into the common language. This is not a simple academic exercise, because Col's plan is going to aggreive powerful interests; he will soon become embroiled in a seismic crisis of politics and faith that’s going to reshape the world. Myuri may find herself getting a lot more adventure than she bargained for…but in for a penny, in for a pound!

Unfortunately, that synopsis also illustrates the fatal problem with Wolf & Parchment. While the scenario is much more plot-driven and epic in scope than that of Spice & Wolf, with higher stakes and greater danger, it also feels a lot hollower and more lifeless. Spice & Wolf succeeded because it was new – not only was it a fantasy story eschewing dungeons and dragons but in its focus on trading and economics it was a genuinely fascinating introduction to a fairly esoteric topic – even most actual professional published histories don’t show a deep grasp of late-medieval mercantilism but Isuna Hasekura gamely dove in headlong and made a big splash. Wolf & Parchment by contrast can only squelch in a swamped field. In the character of Tote Col we’ve got Anime Martin Luther embarking on the Anime Protestant Reformation, and by the end of the book it looks like we’re gearing up for the Anime Thirty Years’ War. This is a story that we’ve all heard a thousand times before, not least in dozens of anime in which pseudo-Catholic (or often literally Catholic) organisations from the Rip-Off Church of Black Lagoon to the Holy See of Berserk are the antagonists.

Maybe Wolf & Parchment means more to a Japanese readership which are not familiar with Christian dogma, European history and other Occidental exoticism (remember how Neon Genesis Evangelion fans tied themselves in knots to concatenate a cruel angel's thesis through the show’s Judaeo-Christian symbology that Hideki Anno admitted he only put in “because it looked cool”?) but here in the West we’ve trodden over this same ground for five hundred years and been stuck in the rut of the same anticlerical arguments in innumerable works from the “Every Sperm is Sacred” song to Father Ted by way of everything from Bronte’s Villette to Marvel’s Daredevil. I had entire dialogues scripted out in my head before the characters even said them. It’s downright embarrassing how little imagination has been put into the depiction of the church in Col & Myuri’s world, as the disguise over this Not!Catholic church is so thin (literally the only substantive difference is that they use a crook for an icon instead of a crucifix – the leader is even called the “pope”) you wonder why they even bothered in the first place. If anything reading Wolf & Parchment has been retroactively tarnishing the shine of Spice & Wolf – I look back on Isuna Hasekura’s earlier work and wonder if he was really being so insightful or if he was just copy-pasting from an economics book then just as he’s rattling through a Key Stage 3 history textbook now. Attempts by Hasekura to broaden the theological content of Wolf & Parchment with Col’s philosophical ruminations about whether or not God exists are also particularly egregious when... y’know… he's well aware that there’s real magic in the world, as he has a werewolf curled up in his bed!

So, as the core content of Wolf & Parchment is so disappointingly derivative, it falls upon the characters to save the story. Myuri will be sure to delight those established readers who are hankering for more Holo – she’s her mother’s daughter, every inch the spirited and irrepressible youthful genki gal with a kawaii sweet tooth snaffling whole platters of candy to fuel her tearaway capers. There’s also a mild dab of lolicon with Myuri’s… precocious understanding of the ways of the world, along with her clambering all over Col, repeatedly teasing him for his priestly vow of celibacy, and her own wolf transformations tearing up her clothes, although it must be stressed that it is nothing even remotely close to Prisma Illya’s levels of raciness! Myuri forms an effective double-act with Col and their relationship is not a simple straight-man/funny-man split as each one of the pair is worldly in some ways but naïve in different ones, a complementary approach which also makes Myrui more grounded and not an entirely indulgent Mary Sue. The book’s climax also includes Col needing to be the grown-up and setting out the bounds of their relationship, and the fact that it comes across to the reader as a genuinely emotional moment of Col’s regrets and Myuri’s frustrations reaching breaking point shows that they have effectively been built up as a believable duo over the course of the book. Col for his part is somewhat more blandly earnest throughout although Isuna Hasekura’s more limited grasp of theology eventually gives way to ground he’s clearly more comfortable on as Col solves the conflict of the book by identifying a trading scam. Speaking of scams though, one area where the book sadly reverts to anime trope form at the end is the revelation of the true identity of another one of his companions, which for a series which prides itself on logic and reason is truly contrived nonsense. You mean to tell me that Col was outright sharing a bath with this guy and never noticed who he really was? Anime Mysterious Light Beams and Anime Steam Clouds are mesmerising forces indeed. It really just seems to have been demanded by editorial so as to paste in some tepid fanservice in the book’s final illustration.

Outside of that scene Jun Ayakura’s illustrations are not particularly remarkable – mostly just plain portraits of the cast with little in the way of action – but they get the job done in setting out who’s who and the colour plates at the start know exactly how to hook you in with a few choice panels of Myuri being adorably moé and charmingly lively. The book’s back matter also has a piece of fanart of Holo & Myuri by Keito Koume, artist of the manga version of Spice & Wolf, which was a nice touch for acknowledging the key contributions of the larger franchise to the series' enduring appeal.

That also sums up the state of Wolf & Parchment – a nice touch, but only in relation to something else. It’s a briskly efficient light novel that moves characters from place to place and has the occasional flourish, but it’s an inessential book with not much new to say that feels a lot like padding-out of the Spice & Wolf story. I dislike concluding that adaptations and spin-offs are “for fans of the original” because it feels like a cop-out that doesn’t enumerate the specific points of interest in the book, but it’s honestly the case for Wolf & Parchment as the chief point of interest is that Myuri is in it, and if she was not it would probably pass largely unnoticed. As it is there’s plenty of Myuri and it’s pleasant to read about her escapades, but Spice & Wolf often claims to be more than cute-girls-doing-cute-things and that aspect is fairly undercooked.

5
A basically competent sequel that lacks the spark of originality that made Spice & Wolf so memorable.
COMMENT AND DISCUSS
blog comments powered by Disqus