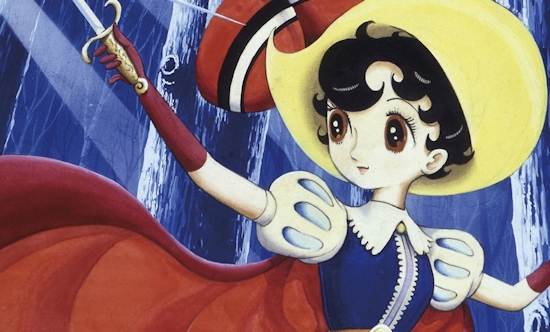 The Twin Knights hails from the 1950's, and is a sequel to Princess Knight. The former Princess (now Queen) Sapphire gives birth to a twin boy and girl, which causes trouble among the population as arguments break out over which of them is the true heir to the throne. A summoned cherub allows luck to rule in favour of the boy, and this leads to a cabal stealing the young Prince Daisy and abandoning him in a forest. Meanwhile, the remaining royal family are captured and locked away, and only Princess Violetta, now a gutsy young girl, must find her brother and save the kingdom.

This is classic fairytale stuff by the master of whimsical manga, and as you'd expect it oozes charm from every page. The artwork is classic Tezuka - heavily influencd by Disney with rounded lines and cartoonish expressions (especially the villains) which often belie the serious undertones of the story. The use of language is clearly aimed at a younger audience, and names like "squishy fever" and "the forest of Slobb"  should give you an idea of the sort of age group that would enjoy the book. Not that adults shouldn't partake, but it's a product very much of its time for a very specific audience.

The characters are utterly adorable, and thanks to this there are some heart-breaking moments beautifully realised on the page. Like the Grimm fairytales, death is a heavy presence throughout (especially at the end where one end if particular is really rather gruesome), but the presentation and cutesy dialogue soften the tale for younger readers. The themes of the book are simple to grasp and delightfully presented, making it a wonderful "frst manga" for younger readers.

Much like Vertical's recent Gundam Origin release, this is a manga that not only tells an excellent tale, it also gives us a glimpse into a seminal period in the history of Japanese storytelling. Whereas Gundam Origin is a faithful adaptation of arguably the most influential genre show in Japanese history, The Twin Knights is a genuine classic that's over 60 years old. It showcases the Japanese talent of taking ideas from other countries and using them as a basis for something with its own unique flavour and quality, and as such it's a book that ought to be in your collection, especially so given that it's a self contained story that covers 240 pages, making it terrific value for money too.

8
A charming tale for all ages, and a must have for those that care about the history of manga.
COMMENT AND DISCUSS
blog comments powered by Disqus