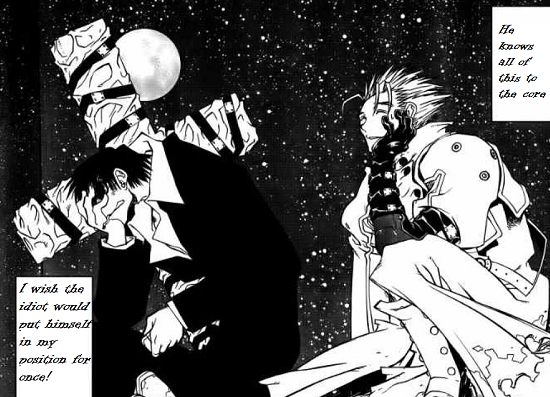 A couple of months ago the Neon Genesis Evangelion Comic Tribute appeared on our shelves, rolling up its pages into a cornucopia of manga talent gathered in abundant celebration of Evangelion's colossal impact on our world. Yasuhiro Nightow's Trigun might not have the universal reach of Gainax's unmistakeable work (then again, little does), but the hero Vash's great red trench-coat and long-hay haircut also cuts an immediately distinctive and prominent figure across the massed myriad of anime characters. The animated Trigun burst out with the expansion of the anime boom in the early Noughties, so it's something that is well-remembered and fondly-regarded by many older anime fans. The manga has earned an earnest fanbase of its own, then, and so in similar spirit has come together to assemble a comic tribute of its own, in the form of the one-off edition Trigun: Multiple Bullets.

The manga is an anthology edition drawing together a new story from Yasuhiro Nightow, his first work on Trigun since the manga finished its twelve-year run in 2008, along with further Trigun adventures penned by a variety of both professional mangaka and doujin authors. Interposed between these stories are "cheerleader" segments with small roundels containing the doodles of various artists and their words of congratulations and encouragement to Nightow for the completion of the Trigun: Badlands Rumble movie, which saw a limited release in Japanese cinemas in 2010 and came out on UK video last year (see our thoughts on it here!). This leads to the question, if the manga is supposed to commemorate Trigun's feature-film achievement... why is Multiple Bullets only appearing now?

The Neon Genesis Evangelion Comic Tribute that I mentioned at the start of this review was suitably placed to bridge the gap between the new volumes of the official Neon Genesis Evangelion manga and dedicated anime fans... erm... buying plane tickets to Tokyo pick up Evangelion 3.33 from Tower Records (yeah, that'll do). Trigun: Multiple Bullets is not so timely. While it's not wildly out of place - the Trigun: Badlands Rumble video only reached the UK last November - Trigun: Multiple Bullets is nonetheless lagging six months behind and I can't help but say that it really has missed the boat and lost a cross-promotional opportunity. (That said, one part is oddly appropriate - with haircutting drama The Severing Crime Edge currently streaming on Crunchyroll, a very... involved story about Meyrl Stryfe giving Vash a short-back-and-sides is peculiarly prescient!)

Nitpicking about release strategies is an ancillary issue, though, and it isn't fair to fix on it without also studying the actual content of the manga itself. Trigun: Multiple Bullets may his missed out on magnifying Badlands Rumble's shine, but does it generate its own brilliance?

The manga is certainly very well put together. The cover design is great, with impressively bold and impactful text while maintaining a balanced show of the manga's character by not over-exaggerating Vash's gunslinger status (there's also good design in the subtle hint of Vash's smile showing that, despite the dagger-edged lettering and bullet-holed jacket, it's not a grimly severe comic). There are no less than a dozen colour pages in two separate sections, plus a fold-out poster - this volume definitely has excellent production values.

The manga opens with an original one-shot Trigun story from Nightow himself. It's a straightforward but entertaining Magnificent Seven (or at least Terrific Two) tale of Vash and Wolfwood being drafted to help a hamlet from being predated on by exploitative robber-bandits. It perfectly suits Trigun's "Weird West" setting and Vash himself exhibits some fun gun-fu to make it a punchy action-adventure. Readers might feel frustrated and mis-sold though, in that despite the story having the name "Badlands Rumble" (and the promotion on the blurb) it's not actually anything associated with the Trigun movie, which is a bit cheeky.

From this promising start comes an absolute clunker. The follow-up story, "The Lost Plant" by Korean artist Boichi, is offensively bad. The realistically-styled art is strong (although the nudity in it is completely unwarranted and the awkward tonal shift conflicts with Trigun's more playful spirit) but its plot is dire. The hero Vash is known for his refusal to kill, preferring to use his perfect aim not to score headshots but to shoot the hammers off of pistols. Challenging his principles could be a source of good drama, but the scenario which confronts him is so monumentally absurd, and his solution of its Gordian Knot so ridiculously contrived, that it reads like a kid squabbling in the playground and going "nuh-uh! I've got inifnity armour times a thousand so there!" Trigun is cheerful but I wouldn't call it childish, and "The Lost Plant" was such an insult to my intelligence that I almost threw the manga away right then and there. At least the Mary-Sue hanging around Vash didn't improbably save the day, so there are small mercies.

Following on from this is the completely redundant "Denizens of the Sand Plains", by Satoshi Mizukami, the one mangaka in the collection who would be known amongst Western readers as the author of The Lucifer and Biscuit Hammer. In his comment on his story at the end of the volume he says, "I'm not very good at drawing other people's characters, so I just borrowed the setting" - well, to that I say "if you're not willing to engage with the characters why are you even in this anthology?"

From these two poor efforts a fortunate rally follows with "Les Enfants" by Ark Performance (none of whose other work has been officially translated but includes interesting titles like Arpeggio of Blue Steel which will appeal to fans of last year's gun-girl comedy Upotte!!), which presents a brief synopsis of the Trigun plot arc in an interestingly stylised fresco art format. Into the second half of the volume, coming sandwiched in between two decent humorous stories  - a sweetly inoffensive 4-koma series of Meyrl and Milly running a TV variety show and the aforementioned art-told and dialogue-free hairdressing comic - comes "Thunder God Rising", a technically accomplished but uncomfortably vicious backstory of one of Trigun's major villains.

Trigun is set in the desert, and a manga like Multiple Bullets is designed to plant some shoots of life into it, but unfortunately they do not find water. It can be pretty to watch the mesmeric rolling dunes for a time, and the art is indeed attractive, but the oases it points to are shallow and can't sustain you for long. I don't have a problem with the sudden contrast between violent and light-hearted stories - a strength of anthologies is that pacy variety gives you the momentum to carry through different styles and formats, so everyone will at least like something - but not every story can stand up, so the ratio of good to bad is poor; strangely for a hero who's normally so on-target, here Vash misses more than he hits.

5
Fair grouping on the art, but scatter-shot on the stories.
COMMENT AND DISCUSS
blog comments powered by Disqus