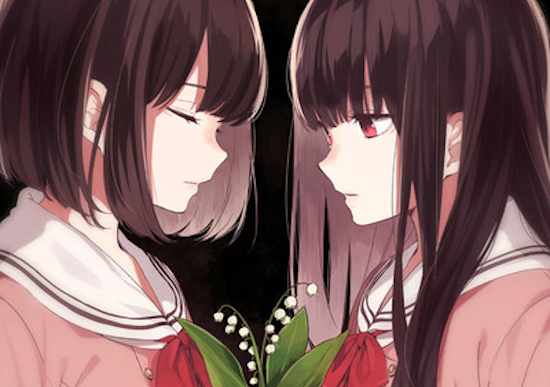 This is a light novel, rather than a manga, with a small amount of artwork scattered throughout. Published in Japan in 2013, but only reaching these shores in May this year, it is written by award winning author Rikako Akiyoshi, who’s previous work Snow Flower, as well as this tale, have been made into movies.

A murder mystery, set in a private all-girls school called St Mary’s Academy, this story focus’ on the members of the school's Literature Club. The club president, and daughter of the school chairman, Itsumi Shiraishi, has been found dead and mystery surrounds the circumstances.

In order to make sense of the situation and attempt to reveal the identity of the killer, the members of the literature club are challenged to write short stories to give their perspective on their relationship to Itsumi, their involvement in the circumstances surrounding her death and their opinion on who the killer is. It is these stories that make up the majority of the book. As you read each unique tale, you build up a picture of the girls’ relationships. They point the finger at each other in turn whilst painting themselves as innocent. Therefore the students’ tales serve to both contradict each other and explain away accusations made against themselves. The book culminates with the big reveal, where you find out the truth and who the murderer really is.

The tale covers some familiar high school themes such as striving for popularity, jealously amongst peers, a desire to belong and making decisions about your future. However, the story also contains some more adult themes, particularly as it moves towards its climax – it is about a murder after all. I don’t want to say any more than this, as this is definitely a book that you should check out and unravel the secrets for yourself. However, I would point out that it probably isn’t suitable for anyone under the age of 16.

I found this book a really easy read. It drew me in right from the beginning and I couldn’t put it down until I’d finished. With each of the short stories, the tale grew in complexity and my allegiances to the characters constantly changed as I continually had to re-analyse what I actually thought happened. I would have liked for there to have been a few more images throughout and it is a little confusing that quite a few of the students’ names begin with an S, so you have to really concentrate to follow all the links between the characters. I even found that I had to go back and refresh myself on exactly who had accused who and why, before the final reveal.

This is definitely a great easy read for your holidays, even if you usually prefer manga. With luck, the movie adaptation will find a release over here - I'm intrigued to see it!

9
A gripping tale that I couldn't put down. A nice easy read for your holidays!
COMMENT AND DISCUSS
blog comments powered by Disqus