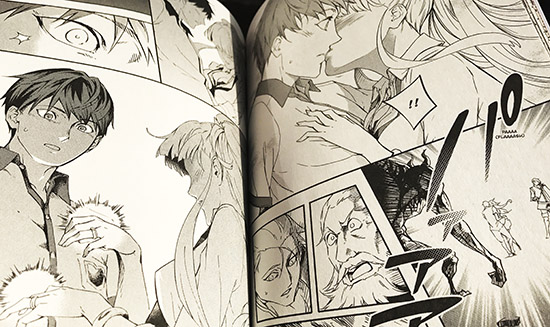 Having just become engaged, surely there’s no better manga for me to take a look at than ‘Tales of Wedding Rings’. However, as enthralling as this tale was, I am kind of grateful that my tale of romance is slightly more grounded than that of the characters in this story.

The covers of at least the first few volumes of this series may be adorned with beautiful women, but the story’s central character is a teenage boy named Satou. Having developed an incredibly close friendship since childhood with a girl named Hime, Satou decides to take the plunge and try to move their relationship to the next level. Hime’s response is to inform him that she’s leaving – just what every guy wants to hear when he finally reveals his feelings to the girl of his dreams! By leaving, Hime doesn’t mean ‘moving to the big city’ or ‘taking a round-the-world trip’ like you might expect. Nope, she hops through an inter-dimensional portal, and Satou decides (without invitation) to go along for the ride.

Satou ends up in what we would describe as a fantasy world (think Lord of the Rings, or GATE) and in the middle of a wedding ceremony no less. It turns out that Hime is a princess, destined to marry a prince from a neighbouring realm and present him with a precious wedding ring. However, on the spot, Hime decides to offer the ring and her hand in marriage to Satou. Little does Satou know when he accepts this offer, that marrying his dream girl also involves taking on the responsibility of protecting the realm from dark forces from the abyss. The ring gifts Satou with power that he can use to defend the realm, and as his relationship with Hime grows so will his power. Sounds like a pretty sweet deal, right?

There’s a catch, of course!!! Probably a great catch in most men’s opinions…

In order to gain enough power to defeat the worst of the other-worldly creatures, Satou must marry not just one but five princesses, obtain their rings and build a bond with them too!

This volume starts with some stunning artwork, printed in colour, and the imagery throughout is great. The story is an imaginative, refreshing take on the ‘travelling from the real world to a fantasy world’ theme that has potentially been done one too many times.  There is a little nudity, both male and female, but nothing overly gratuitous. The fact that our hero is destined to fight off evil foes, whilst basically building his own harem of beautiful women is surely every mans dream, so what’s not to love?

Unless, however you’re a girl???

No, wrong, I really enjoyed it and can’t wait to find out what happens next. It will be interesting to see whether Satou’s heart remains with Hime (what I’m hoping for) or whether he fully embraces the chance to become a ‘five-women-man’… for the good of the kingdom of course!

9
Live out all your childhood fantasies in one go!
COMMENT AND DISCUSS
blog comments powered by Disqus