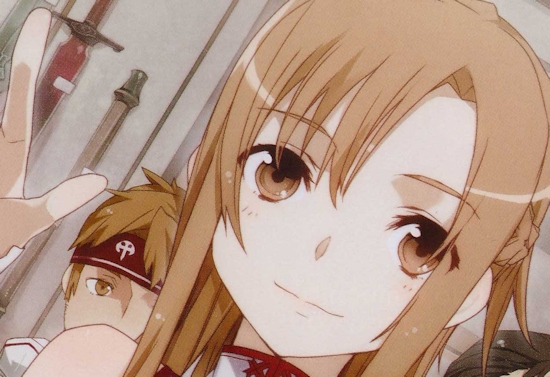 You've seen the anime series, now you can go back and revisit the origins of Sword Art Online courtesy of Yen Press, and their translation of Reki Kawahara's light novel series which begins, of course, with its titular opening volume.

Unless you've been living in a virtual MMORPG for the past couple of years, you'll probably know the general setup of the series - and therefore this book - by now. In short, a young man delves into the opening day of a hotly anticipated new virtual reality role-playing video game named Sword Art Online, having previously spent time as one of the beta testers of said title. Once its limited number of 10,000 players are safely ensconced within the game however, things take a dark turn - the creator and overseer of the game Akihiko Kayaba appears to announce that every single player is locked into the game with only two options for escape... either to die in the game, and thus also the real world thanks to the virtual reality headset every player wears frying their brain, or to clear all one hundred levels of the virtual world of Aincrad to free all remain players as the reward for their victory.

After the initial panic dies down, those trapped within the game split into several factions, with only a relative minority taking on the challenge of clearing the game. While most of those individuals band together to form guilds, our protagonist Kirito chooses to go it alone, although he eventually finds himself teaming up with another of Aincrad's finest warriors, the beautiful but deadly Asuna.

So the scene is set for a blend of action, romance and some exquisite world-building - the author has clearly put a lot of time and thought into Aincrad's creation, and it shows through in the amount of time spent setting out and discussing the virtual world's mechanics and setup throughout the novel. Admittedly this may be a little dry to read for those who aren't interested in video games, so beyond this Sword Art Online is arguably just schlocky fiction, but assuming you are familiar with the trappings of gaming and RPGs there's a certain thrill in the care and attention afforded the nitty-gritty of the world here.

The joy of seeing this world explored in print is what makes Sword Art Online stand out, and largely explains its popularity - every location is considered and well thought-out, which in turn lends a sense of believability and occasional tension to the goings-on within it. Provided you can suspect your disbelief to accept the whole "trapped in a virtual world" concept, which is perhaps the book's weakest link, there's plenty of entertainment value here.

Even compared to the anime series, this volume of Sword Art Online also benefits from moving along at an impressive clip - chapters are brief, the important story beats keep on coming, and the result ensures that even the improbably sloppy romance between Kirito and Asuna (which sees its infamous sex scene that was originally chapter 16.5 excised, no doubt at the author's behest) doesn't get in the way of the monster-slaying trials and tribulations provided by the attempt to conquer both Sword Art Online and the fear of death within Aincrad.

The short, sharp nature of the writing on show here also removes some of the clumsier aspects of the anime adaptation - while the TV series sees girl after girl falling head over heels for Kirito for no apparent reason, in this volume Asuna is the only female given any prominence at all, and although this book won't win any awards for romantic literature it does at least minimise the self-insert wish fulfilment proclivities that reared their head in that adaptation. We could probably tear apart the romance aspect of the book, but considering it's a love story between two teenagers living alone in a world without any real peers, its sappy idealism fits with that world reasonably well so we'll give it the benefit of the doubt even if it's not the strongest part of Sword Art Online's arsenal.

Accompanying what seems to be a very good translation of the source material (with only a couple of minor spelling errors to note) are a number of excellent illustrations provided by abec, some of which are reproduced in colour as per the Japanese release.  All of this makes for a release that lives up to Yen Press' usual high quality standards, which is always good to see.

If you watched the anime series of Sword Art Online and didn't enjoy it, then this light novel probably won't change your mind, although it's certainly a slicker, more focused story thanks to the removal of some of its extraneous elements - a benefit tempered by the fact that this also loses some of the world-building provided by those stories, which we assume turn up in later volumes as side stories.  However, thanks to an entertaining story set in a superbly realised world, those whose imaginations are fired by thoughts of virtual worlds will glean a lot of fun from Sword Art Online's first volume, which shows ably why it's become so hugely popular.

8
Its core concept might not be fresh, but Sword Art Online knows how to build its world and make full use of it to make for an excellent first volume of this series.
COMMENT AND DISCUSS
blog comments powered by Disqus