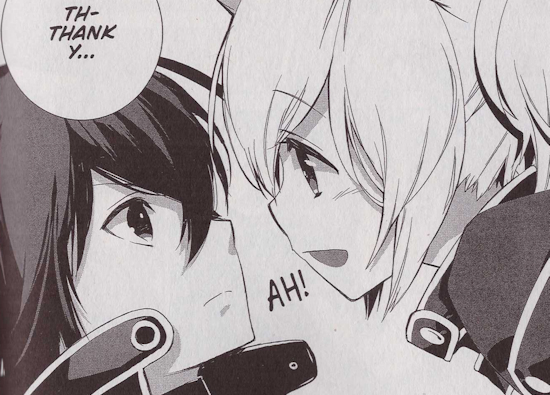 It seems like a recurring theme here at UK Anime that we find ourselves celebrating when series remove their male protagonist for a while and let secondary characters take over - Monogatari Second Season was at its best when Koyomi Araragi was partly or completely out of the picture, and Sword Art Online II did some terrific work with Asuna taking over as the lead character.

In that vein, we come to Sword Art Online: Girls' Ops, a spin-off manga from the hugely successful light novel series that waves goodbye to lead character Kirito (well, sort of, but more on that in a moment), and perhaps more surprisingly also kicks Asuna to the kerb to leave us with a trio of lead females - Kirito's sister Suguha, Ayano Keiko (aka Silica to use her online handle) and Rika Shinozaki (otherwise known as Lisbeth).

With Kirito otherwise engaged, these three friends quickly jump into the thick of things as they decide to pursue a new quest added to the world of ALfheim Online - a quest originally available in the infamous Sword Art Online itself, which has now been taken from its original Aincrad form and tweaked into a new, improved format that fits its new game world. Given that the reward for completing this quest is a ring that you can give to another and use to communicate privately with that person in-game, all three girls have designs on bagging a couple of them - one to keep for themselves and one to give to... well, you can probably guess who.

Imagine the girls' surprise then when their efforts to beat a monster within this surprisingly tough quest is interrupted by the group being saved by Kirito himself. At least, this person looks like Kirito, right down to their dual-wielding of weapons - however, something isn't quite right about their behaviour to tip off those intimately familiar with his fighting style that something is amiss here. In fact, this Kirito-a-like is Kuro, another Sword Art Online survivor who has idolised Kirito to such an extent that they've chosen to impersonate him as closely as possible within ALfheim Online. This configuration also serves as a mask to protect the character from their own past traumas, allowing them an ample excuse to go it alone and remain detached from the rest of the game's player base in order to avoid reopening old wounds. Unfortunately for Kuro, this particular party is one that won't take no for an answer, and thus our all-girl trio end up fighting out the quest alongside their new ally, creating what looks set to be an enduring friendship in the process as the truth about Kuro's circumstances are revealed.

The frustrating thing about this opening volume of Girls' Ops is that the one thing it promises - an opportunity to spend time with some of the original series' secondary characters and learn more about them - an effectively throws it out of the window by pinning all of its focus on a new character while also spending more than enough time invoking Kirito's name in any way that it possibly can. Perhaps if Kuro's story was more interesting this strategy might have worked, but to be honest: it isn't. This leaves us with nothing new learned about Lisbeth, Silica or Leafa, and with a new character who doesn't bring anything particularly interesting to the table other than some post-SAO angst that has been better reflected elsewhere with the franchise. If you're looking for a story that comes even close to rivalling Sword Art Online proper at its peak, then this isn't the volume for you.

On a more positive note, the art style for the series is easy on the eye - its character designs are a little softer and more rounded than their iterations elsewhere, but they're recognisable and pleasant to look at, and the general aesthetic of this volume is enjoyable as a whole. Of course, it can't resist bringing forth a boss with a weapon that disintegrates clothes to throw some mild fan service into the mix, but given the borderline laziness of other aspects of its narrative this is none too surprising.

Ultimately, this leaves us with no particularly compelling reason to recommend reading Girls' Ops - if you simply must consume everything related to Sword Art Online then it isn't a bad opening volume, but there's nothing that stands out to make this a recommended read otherwise. There are clearly plenty of stories to be told about the characters that star here, and perhaps future volumes will go on to do just that, but judging by what's before us we can expect little more than fluff, with any character-driven effort poured into original characters instead - in other words, precisely what you most likely don't want to see from a series with this title.

4
Girls' Ops promises a chance to learn more about Sword Art Online's female cast, and then fails almost entirely to deliver on that possibility to leave a decidedly mediocre story in its stead.
COMMENT AND DISCUSS
blog comments powered by Disqus