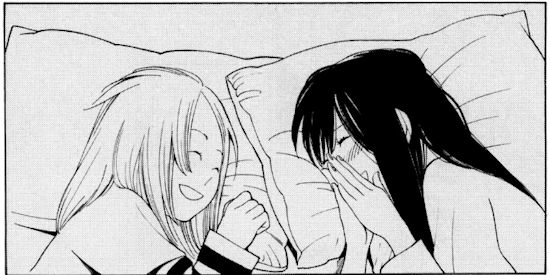 My first contact with Aoi Hana (to use its Japanese title) was courtesy of a streaming outing on Crunchyroll some years ago now - with a striking art style and a gentle, carefully paced love story, it caught my eye and captured my heart.  With this anime series now due a North American DVD release from Nozomi Entertainment next year, we're also being treated to an opportunity to read this yuri series in its original manga form, as JManga brings it to English speakers via their digital platform.

Although this opening gambit weaves an ever-more complex web of all-girl love as the volume progresses, at its heart we find two characters - Fumi Manjoume and Akira Okudaira, childhood friends pulled apart by the former moving, before being reunited as they embark upon their lives at two different high schools.  While Akira (or Ah-chan to her friends) attends the Fujigaya Girls Academy, Manjoume is all set for Matsuoka Girl's High School, and such is the passage of time the two girls don't even recognise one another when Akira helps out her former friend during an incident on the train that they both share to travel to their respective schools.

It's only when their parents convene that these friends are properly reintroduced to one another, immediately restoring their previous relationship with Fumi proving to be something of a "cry baby" while Akira is outgoing and always more than willing to stand up for her friends.  While this has stayed the same, plenty of other things have changed in the intervening period - most notably, Fumi is currently heartbroken at the news that her cousin, with whom she had a fleeting relationship, is about to get married.  Whether this is something that she can talk about freely with her old friend, and reconciling her feels and proclivities at a difficult time, become key factors of this opening volume.

With all kinds of jumbled-up feelings of attraction and love floating around this first volume of Sweet Blue Flowers, there's a striking subtlety to how its all depicted - this isn't a series with an interest in blow-out arguments and spectacular, sweeping romances and break-ups, but rather a quiet and more realistic portrayal or burgeoning love filled with quiet insecurity, low-key confessions and unvoiced worries.  This reassuring dose of reality, occasionally framed through the lens of Wuthering Heights thanks to the involvement of a school drama club in proceedings, succeeds in making the series feel far more effecting than it perhaps would be otherwise - Fumi's heartbreak is tangible despite being barely spoken of, and the tensions, emotions and relationships between other characters are also clearly exhibited via a steady yet understated hand.

All of this is helped along via artwork that matches the story - understated yet effective (albeit frustratingly inconsistent in places), from gently watercoloured full-colour panels through to the relatively simple main artwork of the volume which pieces together the story - and more importantly the emotional state of its characters - with an easy manner.  Alongside this, JManga's translation is proficient and satisfying to read, which again assists with carrying the story along nicely.

Beyond that, there isn't all that much to say about Sweet Blue Flowers at this point - it's made a strong case for reading more thanks to its treatment so far, but it's far too early in the series to see if it makes good on its promise.  Obvious though it seems as to where the story will eventually head, it feels like there's a satisfying emotional journey to embark upon to get there, and I for one will be making sure I join it.  Whether you're new to the yuri manga genre, an old-hand at its typical setup or just looking for a good love story, Sweet Blue Flowers seems well worth keeping a careful eye on.

You can read Sweet Blue Flowers in digital form at JManga.

7
A gentle, subtle and ever-shifting story of love and puberty that is delivered in a proficient and enjoyable manner thus far.
COMMENT AND DISCUSS
blog comments powered by Disqus