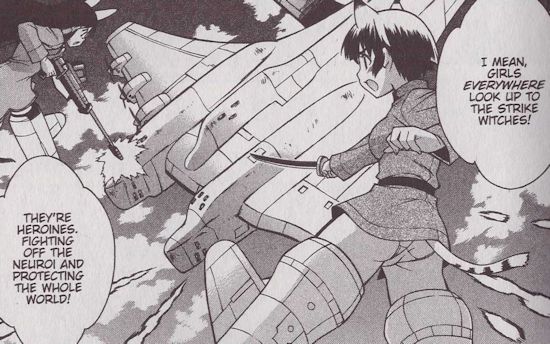 No matter what you think of it, Strike Witches seems like an almost masterful omega point in blending merchandisable characters with constant fan service - an impressive is dubious feat, offset by the fact that the original anime series which accompanies those characters is actually hugely entertaining to watch and imbued with a surprising amount of loving care put into the pseudo-historical context of the characters and scenario employed.

Now, the west is getting to enjoy a number of outings of the Strike Witches in manga form, beginning with Maidens in the Sky. If you've watched the Strike Witches anime then you'll know the basic plot here - a young girl living in the land of Fuso (the series' equivalent of Japan) who wants nothing more than to live out her life helping and healing others using the magical powers she holds finds herself drawn into the world of the Strike Witches - daring magical girls who soar into the skies using magic propelled equipment to find the mysterious alien race known as the Neuroi.

In broad terms, that's exactly what you get in this first volume of Maidens in the Sky, as it effectively tells the origin story of our protagonist, Yoshika Miyafuji, and how she comes to become part of the Strike Witches. However, the way this story pans out is entirely different to the anime - Mio Sakamoto, instrumental in recruiting Miyafuji in the anime, merely resides in the background here, allowing this role to be taken up by another senior Fuso witch in Junko Takei. Having thanked Yoshika for helping out a downed Witch with a tour of her military base, Takei becomes aware of the vast magical power inherent within this young girl, and although her original attempts to persuade Miyafuji to join the fight against the Neuroi fail, events conspire to persuade our heroine that taking Junko up on her offer is the only way she can hope to achieve her goals.

From here, rather than throwing Miyafuji straight into the thick of things as per the anime, she's instead assigned to training with some other young prospective Strike Witches, making friends and getting to know some familiar faces... by which we mean faces of familiars, as this series has chosen to physically manifest the animals which represent the girl's powers as talking creatures (and decidedly perverted ones in the case of Yoshika's familiar). This serves as a prelude to an occasion which requires a still-inexperienced Miyafuji to take to the skies, as the volume ends with our first skirmish of the series against the Neuroi.

All of these changes don't necessarily make Maidens in the Sky better or worse than its animated counterpart, merely different. Truth be told, it's a bit of a swings and roundabouts affair - the progress of Miyafuji's entrance into the world of the Strike Witches feels far more organic here in comparison to the anime, but it also makes for a slower pace than the original work that concentrates more on building the wider world utilised by the series (with some nice touches, it must be said) and its current characters than pitching us into the midst of its warfare and action.

This volume also provides some proficient moments of comedy and entertainment, even making some decent use of the decision to physically manifest the show's familiars, although this may be a step too far for the Strike Witches purist. Speaking of which, the girls all spend a surprising amount of time wearing skirts in this volume, which similarly seems to go against the grain for the rest of the franchise - I imagine someone, somewhere is penning an angry online diatribe at this sacrilege as we write this!

In terms of art style, Maidens in the Sky is utterly okay - its art, backgrounds and character designs are all passable if not particularly striking, but server their purpose well enough. Perhaps out of necessity given their occasionally grand CG composition in animated form, the Neuroi get a major makeover in this series, although at present we haven't seen enough of them to really gauge whether that redesign works in their favour - for now though, they have a slightly War of the Worlds-esque vibe to them, which is no bad thing. Alongside this, the first volume of the series has a good translation and layout that brings no criticism from us.

If you're looking for a direct adaptation of Strike Witches in animated form then Maidens in the Sky isn't it - it arguably makes some risky decisions with the alternate story that it chooses to relate, but at this early juncture it seems to have made a pretty decent fist of setting up its story and setting in a way that both new and existing fans of the franchise can follow and enjoy. Judging by this first volume, the Strike Witches universe certainly loses some of its punch and dynamism in the move from anime to manga, but it might be able to compensate for this elsewhere once its narrative is fully grounded - as a result, we'll be keeping a keen eye on the series to see what future volumes hold in store.

6
It changes its story and other elements significantly from the anime you might be used to, but this is nonetheless a proficient start to the series that sets up everything it needs to in workmanlike fashion.
COMMENT AND DISCUSS
blog comments powered by Disqus