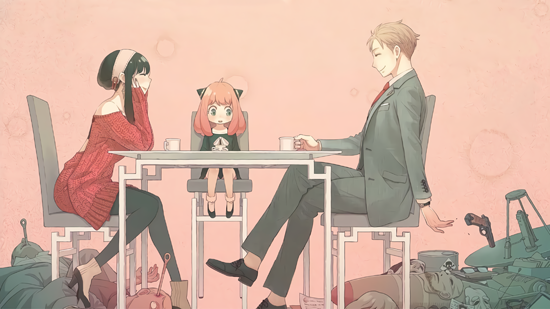 Shonen Jump has made the leap into the digital world and their online app is going from strength to strength. Of their range of digital titles, the one which seems to be enjoying the most buzz at the moment is Spy x Family which has been reported to have been viewed on the Shonen Jump Plus app over 100 million times. It’s a big success for mangaka Tasuya Endo, who has been a professional manga artist since 2000 but is only now seeing his work published in English. Now that print editions of the manga are starting to arrive, those of us who don’t trust the vagaries of streaming and prefer the permanent solidity and definite ownership of a physical volume, we can analyse the intelligence like a true spook of Vauxhall Cross. Is all the talk of the popularity of Spy x Family just a dodgy dossier, or is it the smoking gun of the next big shonen triumph?

After the war, the nation was divided into two countries – Westalis and Ostania. Although it is officially a time of peace nonetheless it remains an age of intense intrigue as suspicion, rivalry, conspiracy and hostility defines relations between the two new states: espionage is rife as both countries infiltrate spies over the border to expose what secret plots the other must be hatching. In this tense atmosphere of cold war, the best in the business is undoubtedly the spy with the codename “Twilight”, a Westalis agent operating in Ostania. A cool calculating customer, Twilight is a peerless expert in tradecraft: not only both a skilled fighter with a photographic memory but a master of disguise and a man of a thousand faces who can adopt a new persona at the drop of a hat. He’s broken terrorist rings, protected ministers from assassination, even defused a ticking nuclear bomb… but his latest assignment may be his most difficult yet.

Twilight’s orders are to get close to the leader of an Ostania political party whose aggressive manifesto threatens a new war between East and West and find out what the man is planning. The snag is that the leader is an extreme recluse who controls his party from the shadows, and is only ever seen in public when attending events at his son’s school, Eden Academy – an elite private institution for the brainiest (or most well-connected) children in Ostania. If Twilight is going to get close to the leader then he is going to have to find a way to join Eden Academy himself. Just becoming a teacher won’t be enough to properly ingratiate himself with the suspicious leader, so Twilight is going to have to find a way to put a child in Eden Academy. That presents its own problems: Eden Academy prides itself on moral education and old-school family values are key to its ethos, so it only ever accepts pupils from traditional married couples. This means that Twilight is somehow going to have to find a way to acquire a wife and a child and get into Eden Academy – when the admissions deadline is only one week away!

It’s a tall order, but Twilight is confident he can manage it – after all, father and husband are just two more fake identities among the dozens he’s burned through. He picks out a girl called Anya from a run-down orphanage to be his academy candidate as she’s smart enough to complete the crossword even at her young age, and makes plans with a civil servant called Yor to be fake spouses – Yor’s up for it as she's nervous about singletons getting denounced as agents to the secret police, while Twilight sees that she’s ditzy enough not to be too curious about the strangeness of the arrangement of helping his 'daughter' enrol into school. However, for this highly irregular mission Twilight has made two severe miscalculations. Anya is actually a telepath who’s escaped from a laboratory – she knew how to complete the crossword because she read the answers from Twilight’s mind – while Yor is indeed totally airheaded but she’s an idiot savant in the art of murder and is a secret government assassin! It’s an odd family to be sure, but can Twilight, Anya and Yor hide their respective secrets long enough to see the mission through?

Despite setting being a take-off on the Cold War you can read Spy x Family in a light-hearted, cheerful way without having to be unduly troubled by the demands of history or conflict. Although the action is set in fictionalised representations of West and East Germany (Twilight operates in the city of “Berlint”) the generic names of “Westalis” and “Ostania” chosen to represent them are a clear indication that politics is only very lightly drawn in Spy x Family – it’s a comedy Eurospy caper, not a serious drama. The book is about the rough’n’tumble of the missions themselves and is not interested in engaging with real-life geopolitics – there are no debates on capitalism versus communism to weigh the book down. The only vague passes at politics are a couple of brief off-hand references to “far right wing” antagonists – which seems a bit odd, given that they come from the equivalent to East Germany, and leads me to wonder if the official Viz Media translation is actually making partisan alterations to the script like when Yen Press edited Highschool of the Dead to remove scriptwriter Daisuke Sato’s support for Japanese ultranationalists. Nonetheless, whatever the truth of the matter that’s only a small and entirely peripheral issue and you shouldn’t get hung up on it because there’s no serious focus on social structure here: Eden Academy itself proves that, because although it’s located in Ostania it’s the exact image of an English public school, to the extent that the entrance to the academy is drawn to be a close copy of the main quadrangle at Eton!

That very direct reference aside, the art of Spy x Family stands out as an attractive and engaging part of this manga that fills it with personality. Shonen manga made on quick turnarounds aren’t always known for the quality of their background art but Spy X Family does put a good amount of effort into the wider scenery, with plenty of variety in external and internal architecture and a couple of decent panoramic sweeps over the city and also the Eden Academy campus. What really sells the manga though are the characters themselves. Everyone in this manga is absolutely wonderfully expressive, and the faces they pull in reaction to all the thrills and spills of the action make each page sing with energy. Anya in particular is a delight, absolutely stealing the show with the cartoony wildness of her double-takes when she reads something dangerous from the minds of the people around her. All the other characters put in a good turn too – Yor can be both funny and cute, whether the poor airhead is slowly overheating as she struggles to understand a high-falutin’ opera or her watery eyes shine and twinkle as she’s feeling emotional, and Twilight himself justifies his claim to be a master of disguise with trying to hold his frustrations together as keeping Yor and Anya on-task is like herding cats.

Twilight’s unusual mission makes for plenty of weird misadventures too, and the action scenes have plenty of knockabout bounce to them – but there is still real death happening during these encounters so it doesn’t feel too cartoonily inconsequential. The central conceit of Spy X Family of three people hiding their own respective secret identities from each other – spy, assassin and telepath – is a gleefully absurd one that it does work hard to keep up. Although it’s surprising that a smart guy like Twilight wouldn’t cotton on that Yor’s martial arts moves mean she isn’t quite the office secretary she says she is, I can bear it on my suspension of disbelief, particularly when they have delightfully quirky encounters such as Twilight allaying Yor’s uncertainty by reassuring her that the thugs he’s beating up are just psychiatry patients on who he’s practising “concussive therapy”, and their ‘marriage’ using a grenade pin as a ring.

Anya is the source of a great deal of the humour of Spy x Family, and a key part of that is that her powers are very well-balanced: although she’s a telepath, she’s not some sort of mental prodigy and she’s actually not all that smart. Her mind-reading gets her into trouble as much as anything else, such as when she thinks she can ace a school test by taking the answers out of the heads of her classmates only to find out to her horror that they haven’t studied properly either, or when she accidentally reads the wrong clue from Twilight’s head and blurts out something compromising.

The print edition of the manga also comes with a small selection of omake extras, in particular some production sketches of early drafts of the character designs. It’s actually quite interesting stuff, particularly one of them showing that Anya was originally envisaged an an older girl with a more cynical attitude. Turning her into a bouncier, dinky little pipsqueak was definitely the right move and shows the importance of repeated drafting. There’s also a fuller credits page than usual and while it’s good to see that Tatsuya Endo’s assistants getting a proper thank-you when they’re so often the ignored and uncredited help I’m astonished that Tatsuya Endo has no less than ten assistants. Ten? Good grief, the art’s not that good. What is there even there for ten artists to do, does Tatsuya have a vice-president for cleaning his rubbers?

One criticism is that although this manga is a comedy, some of the jokes are undercooked. For instance, the point is raised that although Yor is bad in the kitchen, she’s actually excellent at housework… but that’s because she “cleans house” and is good at keeping the place spick and span because she’s used to destroying the evidence from her assassinations. It’s a brilliant idea… but it’s completely wasted because what could have been a funny scene showing a topsy-turvy take on her secret identity is instead just mentioned briefly in a passing remark during dialogue. Even though spies are meant to keep secrets, I also think that there will be no engaging plot twists and we can all see the end of this manga coming from a mile off – if Spy x Family doesn’t end with the fake family deciding to become a real one at the completion of the mission, I’ll eat my hat.

Nonetheless, even if it’s a straight road it’s one that’s lovely to walk down. Spy x Family is a loving pastiche of espionage action with its own distinctive perspective, and one that’s brimming with style which I’ve been happy to re-read several times already. I’m definitely interested in following this terrible trio on into the second volume.

9
This is Sir Roger Moore’s Bond rather than Daniel Craig’s, and a lively comedy caper with a license to thrill.
COMMENT AND DISCUSS
blog comments powered by Disqus