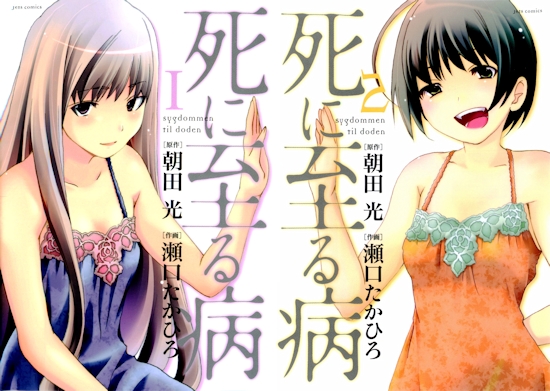 Clinical Psychology student Futaba Kazuma meets a troubled young woman in the street on the day he transfers to his new college, little realising that she would come to greatly influence the trajectory of his life.

Emiru lives in the strange old mansion in which Futuba is lodging, and as he attempts to understand her sickly demeanour and paralysing depression, he vows to save her at all costs.

Sickness unto Death takes the classic Soren Kierkegaard philosophies and translates them into an intriguing and genuinely creepy mystery. By the end of book one, you're no closer to discovering the secret that threatens to overwhelm Emiru, but the author has skilfully managed to create a character that is both compelling and sympathetic. There's a feeling of complexity to the events unfolding within the manga, and the introduction of what appears to be a ghostly presence, whether real or imagined, amps up the atmosphere wonderfully. Presenting the "ghost" as a sketch that appears to have been drawn by a child is a chilling touch, and the manga hits pretty much all the right notes when pitching intrigue.

As a two-part book, I hope that the characters are given the closure they deserve. From the first few pages it's clear that Futuba's quest to save Emiru will not end happily (the story begins as a flashback) but there are other mysteries here, and some glimmer of hope. Notably, the older Futuba seems kind and fond of his time with Emiru, which makes him a warm and welcome presence when the book switches to the present day.

To say I greatly enjoyed the book would be to misrepresent it; it's clearly a tragic tale, but the cast have a genuine feel, and I can only hope the author either pulls a rabbit out of the hat for an upbeat ending, or the book leaves a lasting impression by having something compelling to say by story's end.

I'd recommend Sickness unto Death to anyone who wants a character-led piece with tangible emotion and mystery at its core. It's a welcome change of pace from a company that has, to date, been releasing some very fine books. Consider this a worthy addition to the line-up.

9
Moving, disturbing and beautifully drawn, it's a melancholy mystery with a dark heart.
COMMENT AND DISCUSS
blog comments powered by Disqus