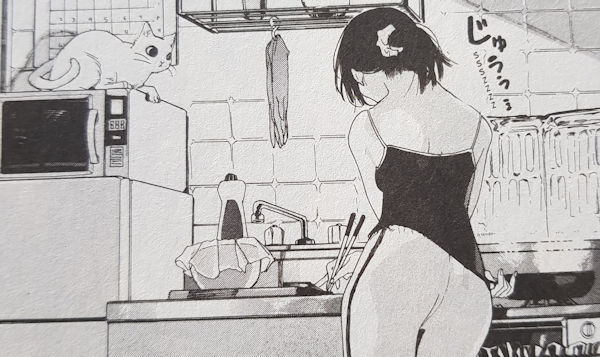 Lonely Miyu lives alone with an adopted cat named Chobi, who she finds in a box on a rainy day. With a narrative driven by Chobi's observations of his owner, this is less a story and more of a mood piece. Chobi's short, descriptive musings of his owner are more about feelings than specifics, and as such it's a terrific "cats-eye" view of life.

The manga is a direct adaptation of Makato Shinkai's 5 minute OAV of the same name from 1999, and follows the same plot. More recently the title has been adapted into an anime, subtitled "everything flows" and is available on Crunchyroll.

Back to the manga, and anyone who has experienced the films of Makato Shinkai will doubtless recognise the everyday slice of melancholy that permeates She and Her Cat. The restraint in the narrative requires the artwork to convey much the atmosphere and feelings, and luckily She and Her Cat is in excellent hands.

Tsubasa Yamaguchi's art is beautifully detailed, with rich, well rendered backgrounds in every panel that lend a depth to the detailed character work overlaying them. I often rail against lazy artwork that only adds a background where absolutely necessary, and this book is a perfect example of why that's important - the everyday nature of the setting is constantly enforced by the artwork, and that makes this single volume an absolute gem.

While the book takes place over the course of the pair's first year together, it's a fleeting read. I have to say I felt a bit sad when I finished the book as I enjoyed the world Shinkai and Yamaguchi have created. True, it's a story whose tone is both lonely and sad, but the companionship feels genuine and it would have been nice to see Miyu further develop as a character alongside her beloved Chobi. It feels almost voyeuristic to simply dip into their lives for such a brief time, but at the end of the book you learn that Mimi, the kitten that Chobi calls his "girlfriend" stars in a novelisation of She and Her Cat, alongside her artist owner Reina - perhaps this will be translated so we'll have another book to place alongside this one.

In the meantime, I'm off to watch the anime.

10
A quiet, skillfully told tale that lingers long after the pages close.
COMMENT AND DISCUSS
blog comments powered by Disqus