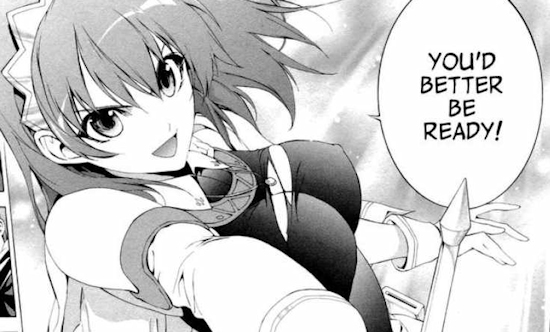 Cecily Campbell is a member of the Knight Guard, an elite force charged with the protection of the Independent Trade City of Housman. Living in the shadow of her illustrious father, her mettle is tested when a veteran of the great demon war goes berserk. Facing the madman with her father's sword, her inexperience gets the best of her and all seems lost as she loses ground and her father's sword shatters.

Luckily for Cecily a young man comes to her aid carrying an unusual sword. Her hero is a blacksmith named Luke Ainsworth and though initially cold and aloof, he agrees to accompany Cecily on a mission to judge her worthiness to carry one of his swords.

An adaptation of the original novels, this manga translation provides some sharp design with some excellent artwork. Yamada's layouts are mostly clean and clear, though his battle scenes often let him down, as theyc an become very confusing, a particularly worrying trend in a Shonen manga with a lot of fighting.

This first volume The Sacred Blacksmith is a pretty one-dimensional affair. The focus is very much on the three main characters (Luke's assistant Lisa being the third) and the battle that convinces Luke to make a sword for Cecily. Beyond some very light foreshadowing, including a mysterious stranger conversing with our mad veteran and a one-panel introduction of Aria the Demon Blade, there's no other character development to be seen. Subsequently one could see the book as pretty lightweight compared to others on the market, and this would be unfair as future chapters do have some genuine merit.

The slightly over-sized format does give the artwork some room to breath, and this is to its credit - clearly the distributors recognised that the artwork was worthy of the extra space, and it does sit rather well on the bookshelf.

In all, a slow start to a series that I'm fortunate enough to know gets better quite rapidly in later volumes. My recommendation? Enjoy the scenery and wade through to later volumes!

7
A slow but intriguing start to the series.
COMMENT AND DISCUSS
blog comments powered by Disqus