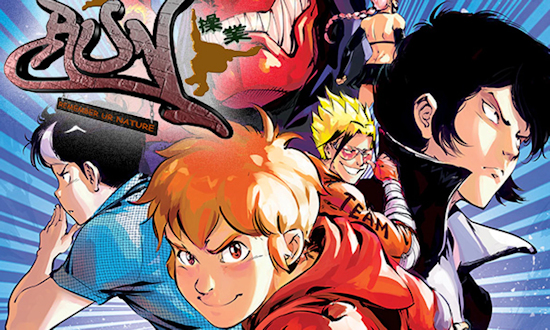 Set in Northern Tokyo, RuN (Remember Ur Nature) is the tale of 3 high school students with a passion for sports, and in particular the free-running spectacle of Parkour. The book features all the elements you'd expect from a shonen manga - friendship, humour, action and intrigue.

The book was first distributed online, before a successful Kickstarter campaign led to the printed volume I was kindly sent by the studio. It's heavily influenced by a love of Parkour, and many of the techniques and action sequences were inspired by a trip to a Parkour seminar in Athens back in 2013, and this in turn led to their own events, Thessaloniki in 2013 and 2014. Passion is not lacking here.

Mangatellers is a Greek studio, so while this isn't technically a manga in the sense of its origin, it's heavy love of the genre makes it a worthy inclusion in our manga reviews section.

The artwork in the book, by Manos Lagouvardos, is reminiscent of earlier manga series, with heavy inked lines and plenty of ziptone used to give a real feeling of weight to the pages. It put me in mind of Gundam Origin, and the Macross II manga I enjoyed 20 years ago.

Action sequences are beautifully rendered, with excellent attention to detail on dramatic angles, speed-lines and expressions. I don't think I saw a single panel that looked unnatural, which is a real skill in completely hand-drawn manga from one artist (most manga these days is drawn by teams and use computer rendered backgrounds). This is old-school in the best way. Character designs are unique and interesting, showcasing a genuine talent for diversity.

The story, by Raphael Voutsidis and Kariofyllis Chris Hatzopolous is along the lines of traditional Shonen sport manga. Protagonist Jean is a natural traceur, though somewhat reckless and lacking discipline as these lead characters often are. He starts a new year at Ome High School, and subsequently we meet the rest of the cast as our hero does. Needless to say there's a lot of parkour action, fun interplay between the characters and some villainous traceurs that require foiling.

What I really enjoyed here is the relationships between the characters. Jean's Mum in particular is a fabulous creation, full of energy and exasperation over her troublesome son. Jean's allies, Keigo and Kishi, provide a balance for Jean, being arrogant and earnest respectively.

If there's one flaw in the manga, it's that the English is a little stilted at times, reading like an overdubbed film with the all-too-direct translation lacking a bit of subtlety. But it's a minor nitpick that is easily overcome by the lively artwork that gives the cast all the character they need anyway.

In all I'm extremely impressed with our Greek friends, this is a fine effort and I can see how it met the Kickstarter goal and ended up in my grubby mitts. It's certainly a keeper and I'll be following the story, and the studio's progress, going forward.

You can read the manga on the Mangatellers Website for free.

8
If you're up for a loving homage to Japanese manga, this is a great place to start.
COMMENT AND DISCUSS
blog comments powered by Disqus