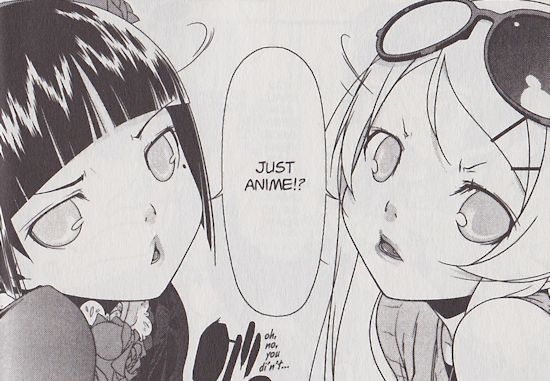 Although its animated outing hasn't made it to the UK, Oreimo surprised many when it emerged into the world by proving to be if not quite a modern classic, at least a well-produced and entertaining series worthy of praise, and with a clear aim towards the otaku crowd with perhaps some of the sharpest self-referential comedy since the likes of Genshiken.  Now, the lack of a UK release of that anime is at least somewhat offset thanks to Dark Horse Comic, who is now releasing one of the original light novel series' manga spin-offs in English.

We join the world of Oreimo (or Ore no Imouto ga Konna ni Kawaii Wake ga Nai to use its less snappy full title, aka My Little Sister Can't Be This Cute in English) via Kyosuke Kosaka, your run of the mill high school boy.  Just like any normal high school lad, Kyosuke is exasperated by the behaviour and attitude of his little sister Kirino, a haughty and stuck-up middle schooler whose looks could kill and she knows it.  With a part-time modelling career, excellent school grades and a place on the athletics team, Kirino is every parent's dream daughter (much to Kyosuke's chagrin as he finds himself constantly overlooked by his mother and father)... but is she really the perfect, healthy all-rounder she seems to be?

If this were the case Oreimo would be rather boring, and lo and behold Kyosuke soon stumbles across a rather huge chink in Kirino's armour completely by accident - she's a massive otaku, dedicated fan of Stardust Witch Meruru (one of Oreimo's in-universe anime titles) and what's more an otaku with a love of visual novels and dating sims revolving around little sisters.  Rather than use this knowledge to gain revenge over his sister or anything of the sort, Kyosuke instead finds himself helping his younger sibling not just to come to terms with her proclivities, but also to find other like-minded friends who she can talk to about anime without revealing her secret hobby to her existing friends.

Thus, this first volume of the manga sees Kyosuke tracking down and outing the owner of a suspicious DVD within his house, only to find that he quickly becomes the "go-to guy" for his little sister as she looks for advice about what to do with her huge stash of anime and related goods, and drags him into a search to find like-minded individuals to share her interests with (the poor girl clearly doesn't realise that UK Anime has a forum!) - something which she manages to do, albeit in a passive-aggressive chalk and cheese fashion thanks to a girl who insists that all and sundry call her "Kuroneko".

While both the original light novels (sadly not officially available in English) and its anime adaptation stuck pretty snugly to the "cute" part of the series title, this manga adaptation veers in something of a different direction visually by leaning more towards the side of "sexy" - in almost every panel Kirino looks more like she's posing in a sultry fashion for a modelling assignment than just lounging around her house, and even the other female characters such as Kyosuke's childhood friend Manami get something of a makeover in a similar fashion.  Whether this particular aesthetic decision works for you remains to be seen, but for me it's at odds with the core of the series - I've nothing against a little "airbrushing" of character designs to make them more appealing or even sexy, but on this occasion it's carried out to an extent which actually reduces the impact of the visuals as a whole and occasionally simply look a little weird.

In a similar sense, Oreimo makes miscalculations with Kirino Kosaka's character as a whole - while the original character vacillates rapidly between hatred and grudging friendship with her brother, this Kirino is far less forthright or extreme in any of her relationships, either with Kyosuke or others.  While some would argue that this dialling down of what is occasionally the character's most annoying trait is a good thing, it does bleed some of her impact from this opening manga volume, leaving her verbal attacks on her brother lacking bite while her more contrite moments similarly lack any impact.

These issues perhaps drill down to the core problem with this first volume of Oreimo - it isn't bad by any stretch of the imagination, but it's also most certainly "less good" than AIC's anime adaptation at portraying the energy of the show and its characters or making full use of the humour inherent in its premise, instead allowing its focus to wander elsewhere and letting the characters stagnate and their stage feel a little lifeless as a result.

If you're completely new to Oreimo and shorn of the pre-conceptions that come from having seen the anime, then you might get some more mileage out of this manga adaptation - this first volume is  faithful to the light novels thus far overall, and it can still be reasonably fun and light-hearted to read, and Dark Horse have done a reasonably good job of presenting and translating it aside from one or two slightly odd minor decisions.  However, we can't really deny that this isn't the best way to enjoy the series in English as it stands - an opinion which makes the lack of a UK release for the Oreimo anime all the more disappointing.

5
A reasonably faithful adaptation of the source material, but one that somehow manages to lose a lot of the magic of the series in the process.
COMMENT AND DISCUSS
blog comments powered by Disqus