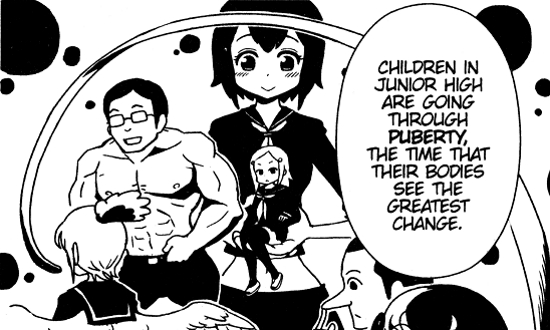 Seven Seas Entertainment has always had something of an affinity for the strange and supernatural. in the past it was well-known as a publisher of vampire manga (and Dance in the Vampire Bund is still going strong even as other titles have been discontinued), and ever since Monster Musume hit the jackpot it's gone all-in on monsters as well. We already have Okayado's own more conventional fantasy manga 12 Beast and next Easter we'll have the spin-off Monster Musume: I Heart Monster Girls, and while you're waiting for that you can pass the time with the shonen-ai Merman in my Tub, the slice-of-life A Centaur's Life, and in the New Year the horror-comedy Franken Fran. Seven Seas are leading their own goldrush and tearing through multiple genres of monster-manga to keep the Monster Musume momentum going from every possible vector; will Nurse Hitomi's Monster Infirmary discover a new monstrous motherlode or has this seam been completely exhausted?

Your teenage years can be a troubling time. All those hormones, all that hair... it's a period of alarming and incomprehensible change, and much like the ground shifting beneath your feet at the start of an avalanche your head can feel like a helpless bobble swinging dizzyingly on top of a runaway body that's careering towards catastrophe. For those undergoing puberty it's known as a time of extreme moodiness, and in this school it's also reflected by extreme mutation as well! Most school nurses just have to administer BCG jabs and turf out the pupils with "migraines" who are skiving in the sick bay, so spare a thought for the long-suffering Nurse Hitomi - between re-stitching a zombie's limbs back on has to contend with growth spurts that break through ceilings, and school lunches so dissatisfying that pupils have turned to eating their classmates instead. It's a raft of problems that can't be cured by just a spoon of cod liver oil, but Nurse Hitomi is a cyclops (and she has a bust so large that it's giving her back pain) so she's very well equipped to sympathise and empathise with pupils who feel unusual and abnormal, and helpfully coach them through their difficulties to find a new equilibrium in their lives as young adults. Eyes are windows to the soul, and Nurse Hitomi's one huge face-filling eye is a wide-open gate of guileless, selfless desire to help others... although with her lack of depth perception it's a toss-up whether she'll put a needle in your arm or up your nose!

With a busty cyclops on the cover and a creator credit of "Shake-O" Nurse Hitomi's Monster Infirmary might at first glance seem to be a close imitator of Okayado's Monster Musume, but it actually has very different tone and focus. For a start there's not even Monster Musume's vaguest handwaving towards a biology of monster races or an evolution of monster culture - there are no Best Girl lamias here, and the "monsters" are more weirdly idiosyncratic individual mutations more like a dysfunctional superhero academy than organised liminal species. Also, while this manga does have multiple fan service segments, the emphasis on these mutations is not (at least in the main) about giving girls extra prongs for their bras to catch and tear on as in Monster Musume but rather as a visual representation of Important Life Lessons.

The chapters of Nurse Hitomi's Monster Infirmary follow a consistent formula of a pupil feeling uncomfortable or embarrassed by her bizarre biology, her going to Nurse Hitomi's office for help when it starts interfering with her life, and then Hitomi gently encouraging her to accept her nature with a pep-talk about being honest with and proud of yourself, that it's not stuck-up to take care of your appearance and not be a scruff, that smoking is bad, breakfast is an important part of a balanced diet, and so on. A girl with wings hates being chained to the ground with rules and wants to soar in the open air, but finds the empty sky lonely and admits that it'd be better to stay in school; a wallflower is so timid and anonymous that she literally turns invisible (I remember this exact scenario being done in Nickelodeon shows back in the day); sisters' sibling rivalry is enlarged to the point that one's a midget while the other's a giantess. These vividly exaggerated depictions of youthful hang-ups do make good use of what is after all a visual medium, and scenes like an enlarged tongue gumming up your mouth do highlight the inarticulate anxiety of a body you do not feel in control of, but for an older reader who's not only already lived through all this it but seen it plenty of times on kid's shows too it can feel quite patronising with how hard the manga's labouring the point. Nurse Hitomi's Monster Infirmary could be a blandly worthy the-more-you-know, let's-all-ride-a-rainbow collection of Very Special Episodes, but when one chapter features a boy growing breasts apparently for the cause of transgender acceptance but the next has the hapless Hitomi being virtually tentacle-raped by a colleague with prehensile hair it does send out mixed messages.

What rescues Nurse Hitomi's Monster Infirmary from being an entirely repetitive collection of self-help guidebook motivational speeches is the execution. The manga has lively, sharp-edged art that's distinctive from Monster Musume's buxom roundedness and A Centaur's Life's natural sketchiness and Hitomi herself has plenty of cartoony personality with her big black eye a small constellation of sparkles. A good deal of physical humour is supplied by the zombie girl, a recurring character who scoffs at rigor mortis and leaps joyfully into (un)life at a full sprint - which often leads to her completely falling apart in a washing-machine tumble as her stitches come undone and makes for some novel jokes like when a teacher stands on the letter of the law for "head"-count and marks her decapitated body down as tardy even though it's sitting at her desk in time for the register. There are some gentler-paced and more reflective interludes where the adults in the cast also take time out to recognise that they experience changes of life just as much as their wards have changes of body, and one chapter handles a change of tone extremely well with an obsessive over-eater's steadily-tightening, throttling and blinding hunger.

Nurse Hitomi's Monster Infirmary is a curious interpolation between Seven Seas' Monster Musume at one extreme and A Centaur's Life on the other. Monster Musume is silly and casual and a roaring success; A Centaur's Life is serious and rigid and an absolute disaster; Nurse Hitomi's Monster Infirmary features the latter's real problems but the former's irreverent solutions, and it has mixed results. It runs the risk of falling between two stools - Hitomi gives children a helping hand struggling through adolescence, so with Christmas coming up this manga might be a suitable gift for younger relatives... but given parents' variable tolerance for fanservice it could end up excluding the demographic that'd most benefit from it. Older readers will chafe at the feel-good clichés in the chapter themes but the art surrounding them could cushion that.

6
Like the problems of puberty that it advises readers about, Nurse Hitomi has lots of zest but erratic direction.
COMMENT AND DISCUSS
blog comments powered by Disqus