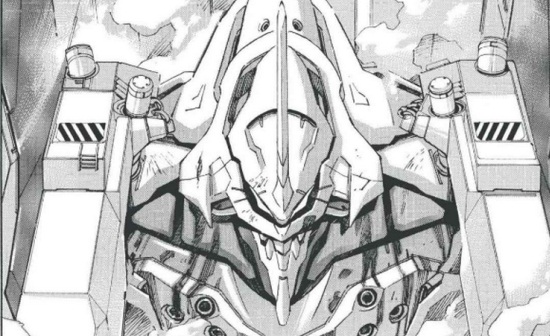 When it comes to manga and anime that share the same source there’s a fairly tried and true rule – whichever comes first is better. This can be seen across a whole spectrum of the industry as a whole – few would argue that Love Hina’s anime adaptation is anywhere close to being as good as the manga or that the Madoka Magica manga approaches the sheer audacity of its anime original for example. There are however a few precious gems that buck this trend in one way or another; Cardcaptor Sakura’s anime adaptation blows the original manga out of the water for example, and today’s subject is another one of those shining gems – Yoshiyuki Sadamoto’s adaptation of GAINAX’s classic, genre–defining series Neon Genesis Evangelion, which has finally concluded after 19 years (longer if you want to include the gap between the Japanese and English language releases) and 14 compiled volumes. It should be noted that the anime is still the original work – though the manga did debut some months before the anime aired this was solely due to production issues. Given that it’s finally over, let’s take the chance to consider the manga as a whole and its position in the franchise.

The story as far as it goes is probably one of the best known in the world of anime but for those who haven’t yet had the chance to experience this in either format: Shinji Ikari is summoned by his estranged father to Tokyo-3, a city rebuilt following an apocalyptic event known as the Second Impact. Upon arriving, Shinji learns that he has been summoned not to reconnect with his father but as the latest test subject in his father’s work, and he is to pilot the colossal bio-mechanical entity - the Evangelion -against a group of alien invaders termed the Angels. Along the way he’s introduced to some of the best-known and best-loved characters in all of anime and manga, from the stoic Rei to the archetypical tsundere Asuka, and must work through battles not just with the Angels but with the people around him to find a place where he can fit in and come to terms with himself.

As with the current film versions of Evangelion (due to reach their own conclusion at some point in the hopefully not-too-distant future), Sadamoto understands that the best way to make an adaptation like this work is not to slavishly copy every single beat of the story whilst at the same time retaining everything that made the original work good and building on that foundation to reach some new conclusions. The "Rebuild of Evangelion" films took this to some pretty extreme places in 2.22 and 3.33 but Sadamoto chooses to make his variations more subtle on most occasions. yet they are hugely impactful never-the-less. Take the introduction of Asuka for example: in the original anime her introduction is by-and-large taken at face value – the gang head off to a ship and there’s Asuka who sets herself up as a somewhat comical character with a superiority complex who in fact never gets a chance to be seen as a capable combatant in her own right until the follow-up films, Death & Rebirth and End of Evangelion. In the manga interpretation however (which to a large extent clearly inspired her introduction into 2.22) Asuka doesn’t even meet the other characters until after they’ve witnessed her in combat, and even after they meet Shinji doesn’t connect the amazing Eva pilot with skills he can barely fathom with the beautiful and violent girl he encounters through sheer random chance. On paper it doesn’t sound like a big change, but in practise it radically shifts both Shinji and the reader’s interpretation of the character by making it absolutely clear that Asuka is in fact everything she claims to be whereas in the TV series she comes off as a boastful brat. The manga is full of dozens of such instances which shed new light and new theories on many of the big themes and mysteries set up in the series.

That being said though, it should be clearly stated that the manga version at no point ever works to lessen the original story it’s based on. Instead the manga compliments the anime through the way it re-interprets events and focuses on different aspects, with even minor characters like Toji and Hikari getting back story and character detail that elevates them. There is a cost for this however, which is that the manga is much darker than the TV series - a lot of comic elements have been removed in order to make room for character-building and a more direct narrative, where the anime found room for comic moments and episodes like Magma Diver and also does a lot a character work that the manga doesn’t have with episodes like A Human Work.  The result is that comparisons between the versions becomes a case of discussing the interpretations of events and characters rather than holding up one as the superior work and dismissing the others. It also makes revisiting the other versions an absolute joy as you see the variations play out before you.

The artwork by Sadamoto is consistently exceptional throughout every panel of every page of the series. Whilst it may be easy to dismiss the fantastic character designs as being an easy copy for him (Sadamoto was and still is the original character designer for the Evangelion franchise, and is currently actively working of the new movies) but to do so would be an unfair dismissal as the designs are utterly gorgeous, whether in simple background shots to the sumptuous full-colour cover pieces - unlike many manga of mecha anime Sadamoto also fully realises how to pull off dynamic action scenes to phenomenal effect.

It may have taken the better part of two decades to finally release every volume, but frankly it has been absolutely worth the wait and no matter if you’re a devout fan or a newcomer its more than worth picking up this truly brilliant manga for yourself. Thankfully, this can now be be done fairly quickly thanks to Viz Medias’s recently released omnibus editions wof the older volumes in preparation to the final instalments of the series.

10
Evangelion sets the bar for how to adapt a work to another medium.
COMMENT AND DISCUSS
blog comments powered by Disqus