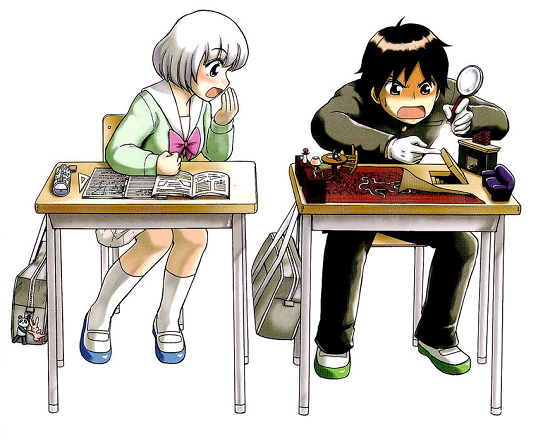 Some time ago I used to be quite a Simpsons fan. This is long in the past - The Simpsons hasn't been culturally relevant for a decade now, and it hasn't been funny for a lot longer - but I remember that one of their better pieces of merchandise was a funny little volume called Bart Simpsons' Guide to Life. Amongst the wit and wisdom of that mischievous young rascal was a guide to cheating in schools tests - but amidst all of the advice about desk-positioning and which crevices are easiest to slip in crib-sheets, there was a small disclaimer... "it might be easier to actually learn than follow these rules". It's something that came back to mind when reading My Neighbour Seki - ironically this schoolboy's determination to goof off is outright industrious, and the amount of effort - and occasionally, pain - he invests in avoiding work would be more than halved if he just spent the period looking at his books instead... but then, to borrow another quotable line from The Simpsons, "that's the joke".

My Neigbour Seki is the original manga on which the anime Tonari no Seki-Kun: The Master of Killing Time was based - it was streamed on Crunchyroll early last year and you can read our thoughts on it here. If you'd prefer to approach the manga without preconceptions though, the synopsis is a simple set-up. Seki is a back-row classroom skiver, completely uninterested in his schoolwork and using the advantage of his position out of the teacher's line-of-sight to avoid doing any without being caught. Yokoi is a diligent and studious girl unfortunate enough to be sitting at the adjacent desk to Seki, but as much as Seki's completely opposite nature frustrates her, he also fascinates her in equal measure. This is because Seki is peculiarly enough very active in his laziness - he doesn't do anything so simply indolent as just doodle in the margins of his exercise books - he concocts incredibly elaborate games of make-believe on his desktop with amazing invention, increasing sophistication, and a satchel from which he may have taken out the textbooks but only to make more room for enough props to outfit a theatre company! As much as she tries to focus on her own books Yokoi can't help but notice Seki's antics out of the corner of her eye; irritating her like a trapped eyelash, she turns to pull it out and stop all this nonsense - and often finds that despite herself that motion has made her part of one of Seki's games! All of Seki's distractions aren't doing anything to help an exasperated Yokoi's grades, but as much as she tries to deny it she can't help but admit that sometimes they're also pretty fun...

To be honest I went into My Neighbour Seki fully expecting to able to bash out a quick hatchet-job review, trash it in short and easy order and then bunk off early myself. The concept sounds like a one-note joke that would wear thin very quickly: funny-man Seki does something wacky, straight-man Yokoi calls it stupid, rinse and repeat until all the colour's washed out - right?

Wrong, surprisingly. That scenario isn't at all what happens - My Neighbour Seki succeeds in staying fresh from cover to cover. This is for a number of reasons - and one is just the simple variety of Seki's games. Whether it be turning the dints and knife-scores of a battered woodworking counter into holes in a golf course or a game of Othello into a zombie apocalypse there's a great inventiveness on display here which throws up new and different scenarios right to the very end of the book - there's actually a very theatrical quality to My Neighbour Seki, in how they manage to do so much in just a tiny space, literally just one corner of the classroom. Despite the unreality of the central concept (let's face it, in real life Seki would just be fiddling under the desk-lid sending texts on his mobile phone) this actually makes the action more believable as it genuinely inhabits the setting rather than it just being in front of an irrelevant backdrop that could have been played on any other flat surface - Seki doesn't just rely on his magic bag for materials, everything from the backs of the pupils in front of him to the very light streaming through the window becomes part of his schemes.

Secondly, as much as this stage is well-used, the mangaka understands the need to have an opportunity to take a breath and so every few chapters takes the odd couple of Seki and Yokoi out to the pool and the playground for a change of scenery. The structure of My Neighbour Seki is also a good example of what I call iterative humour - taking a simple gag and repeating it, but through incremental elaboration building it into something truly absurd - Seitokai Yakuindomo is another title which does this well, although in contrast to the latter's sex jokes and literal toilet humour I must stress that My Neighbour Seki is light and untroubled in its content and quite safe to show to nieces and grandmothers alike.

Perhaps most importantly though, Seki is a silent character - outside of an occasional punctuation-mark exclamation he doesn't have a single line of dialogue, and all of his actions are in dumb-show.  This makes his games more fun, by giving them a greater presence not obscured by speech bubbles and so a closer focus for the reader and a more soulful integration into the person of Seki himself, but it is also key to involving Yokoi in the action. She isn't just a commenter repeating what Seki's already said to us in a shriller and offended tone, she's an interpreter who decrypts his behaviour for us. As well as reducing the basic repetitiveness of the double act, this makes it easier for Yokoi to have a more activist role in the action, as she's not just reacting to events that have already been and gone - but of course, Yokoi can't upbraid Seki for his foolishness too loudly because the teacher will overhear them and only think that she was skiving, too! - so their relationship is not just a series of jokey plays but at times a fascinating examination of non-verbal communication, although this is sometimes not made best use of with interactions that are lubricated by Tokoi's whispering a bit more than is really necessary.

The art which depicts these games of footsies is fairly workmanlike, unadventurous but basically competent, but it does have a good line in double-takes and when a third character Goto is introduced watching her play with her pigtails to mask her mouth in embarrassment and other motions is quite cute. How the front and back cover show both sides of Seki and Yokoi's distant and more involved reactions to the games is also not just bare but effectively minimalistic.

My Neighbour Seki was a pleasant surprise for me. While here at the UK Anime Network we weren't taken by the anime version, I can only say that the different atmosphere and pace of a manga version works to this title's credit. Light-hearted and good natured, it doesn't only keep up the hit-rate of funny stories through all of its chapters but shows us a pair of characters who are more expressive and articulate than the protaognists of a hundred other tired manga rom-coms, even if they don't say a word.

9
A charming and inventive book that takes an oft-repeated double-act concept that ought to get boring quickly but instead keeps it fresh and fun throughout.
COMMENT AND DISCUSS
blog comments powered by Disqus