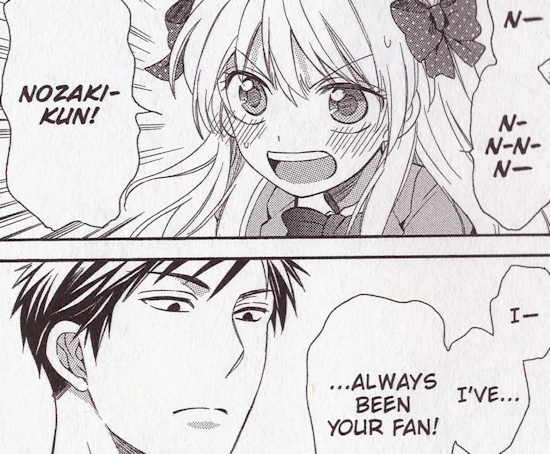 It's easy to trip over your words and bungle a confession to the boy you like, but Sakura Chiyo's attempt to confess her feelings to the dour Nozaki must surely go down in the annals of history as one of the most spectacular missteps in manga history. Somehow, the "I like you" floating around in her brain turned into "I'm your biggest fan" when passing her lips, and the resulting conversation goes downhill from here. Still, it does end with being invited back to Nozaki's place in a surprisingly forward manner...

...except the reason for that invitation is for Sakura to help Nozaki work on the latest chapter of his serialised manga. Yes, unlikely though it may seem from his personality Nozaki is a prominent, published shoujo manga artist, and somehow Chiyo has become another member of his team of assistants. So begins perhaps the funniest opening volume of a manga series I've ever had the pleasure of reading. Apart from Yotsuba, obviously, but that resides within its own untouchable tier of genius.

It's actually difficult to dig into why this first volume of Monthly Girls' Nozaki-kun is so successful - it rigidly follows the four-panel comedy manga formula, squeezing setup punchline and reaction into those panels, but the gags are almost all laugh out loud funny thanks to gags which hit the mark with unerring accuracy, like a clown with a sniper rifle only less terrifying.

Part of this volume's success rate is undoubtedly due to its subject matter - the world of manga creation is both fascinating and has plenty of amusing tropes, anecdotes and ideas to riff on as we watch Nozaki trying to come up with ideas for his story or dealing with some "unique" editorial staff. Just as this might threaten to become tired and well-worn, new characters are introduced to the roster, allowing their interactions to take centre stage and change things up without ever losing sight of the silly but laugh out loud funny outlook of the series.

This is helped by the fact that the characters involved are both great in their own right while also meshing perfectly to create a joke making "team" - Sakura herself is the perfect foil to all of the stupidity revolving around her as her exasperation pours out into panel after panel, offset by Nozaki's stoic, laid-back take on every element of his life. The extended cast become even larger than life compared to this main pairing, but they never threaten to steal the show or push the silliness too far, and this volume always remains grounded in spite of its flights of fancy.

It has to be said that this volume also feels like great value for money - it is literally cover to cover four-panel comics (yes, including the inside of the covers), to the point where the translation notes have been shoe-horned a little unsatisfyingly into the middle of the book. With so much content and such a high hit rate of great jokes and moments, you're hopefully beginning to understand my grand pronouncement a few paragraphs ago.

If I had to mark down Monthly Girls' Nozaki-kun for anything (which I'm not going to do, and you can't make me), it would be its artwork, and even here I'm simply nit-picking - this isn't an incredibly eye-catching manga but it is great at portraying everything that it needs to, accentuating humour with its illustrations and facial expressions and encapsulating or accentuating its jokes as required. Character designs are decent enough, and as long as you aren't expecting a tour de force of outright beauty there isn't really any complaint to be made here.

Aside from the odd placement of its translation notes and honorifics explanation (which is simply a result of the packed nature of the book), Yen Press have provided a great translation here which ensures that the full comedic force of the volume is felt without losing its nuances or veering too far down the road of localising the text to the point of changing elements entirely. The overall quality is exactly what we've come to expect from this publisher, and that's most certainly no bad thing.

It's really incredibly easy to know whether Monthly Girls' Nozaki-kun is a series you should pick up. Do you like funny things? Do you enjoy laughing? If the answer to these questions is yes, then this is a must buy. Of course, comedy is highly subjective so your mileage may vary, but never before have I laughed so long, hard and often across so many pages of manga, and that's really all I can add to the discussion. Having come to this series from its successful anime adaptation last year, it's pleasing to see all of the humour inherent in that adaptation present and correct here, and bolstered by even more of the same across its pages to prove that this source material is inherently funny. If you enjoy that series you'll be at home here, but even if you're new to Nozaki-kun's world you're all but guaranteed a whale of a time.

10
A book literally packed from cover to cover, and almost every page is a winner - this four-panel series has gotten off to a perfect start thanks to an almost impossibly strong sense of comedy.
COMMENT AND DISCUSS
blog comments powered by Disqus