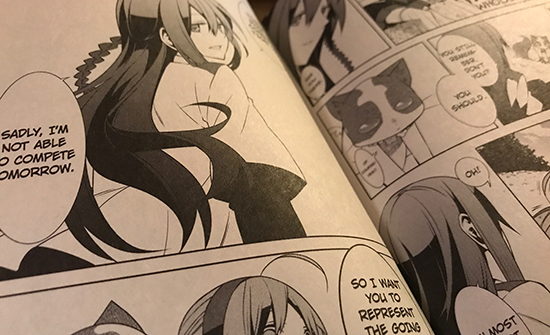 There are six volumes to this manga and it was followed up by a 12 episode TV series. This initial volume starts with a rather normal premise – Eruna-Ichinomiya is struggling to decide which high school she wants to apply to. She’s not your typical student and appears to lack any kind of motivation to make a decision, in fact I would go so far as to call her a bit of a brat! When her cousin suggests that she make an application to Mikagura Academy, she shows little interest until she checks out the catalogue and is tempted by the cute uniforms and an even cuter girl in the brochure, proving that academia really isn’t top of this young lady's priority list.

To get into Mikagura Academy, Eruna must pass an entrance exam. This isn’t your regular exam though, as it involves simple sums, followed by an interview with a cat and even after passing this, Eruna then fails to make it to the welcome ceremony, because she sleeps in! It quickly becomes clear, if it wasn’t already thanks to the talking cat, that Mikagura Academy isn’t your typical school. All students much join one of the schools culture-themed clubs and compete in battles against other clubs in order to gain credits that can be used to improve your living conditions and status in the school - mention of any kind of tradtional study is extremely minimal.

This first volume follows Eruna-Chan as she settles into the school, is introduced to representatives from different clubs, tries out for those she is interested in joining and ends with her first inter-club battle. I found the story to be quite random and frantic at first, and it took a little while to figure out exactly what was going on among the chaos of talking cats and inter school-club battles. My initial thinking was that maybe this story was based on a battle-based computer game, but apparently the stories are actually based on songs written by Last Note that use Vocaloids.

The artwork on the cover is busy, bright and exciting, and does a great job at drawing you in. Inside, the graphics continue to be of a high standard with characters clear and background imagery included to give a sense of location when needed. Expressions are well defined, which serves to make clear the lead characters emotions, which is key to the narrative. The battle sequence at the end of volume one is particularly impressive, which bodes well for the series going forward, as this action is the key dynamic of the series.

To tell the truth I almost stopped reading about half way through this volume. However, I persevered and it eventually hooked me. By the end of volume one I found I was disappointed that it ended when it did, on a typical dramatic cliff-hanger. I am left wondering whether Eruna will ever find her place in this school, will she actually knuckle down and make some friends and will she ever be able to strike up a proper conversation with the girl of her dreams?

This tale will probably appeal most to a teenage audience who will sympathise with Eruna over how difficult it can be to make decisions about your future when you’re so young and to find your place in a new school. The fact that Eruna is sexually interested in women, and this drives a lot of her actions at the school, also gives it an interesting dynamic that could appeal to both LBGT and male audiences alike. I found it interesting, but not enthralling until the very end.

6
A fast-paced, sometimes tricky to follow, frantic take on the school club dynamic, but not without its charms.
COMMENT AND DISCUSS
blog comments powered by Disqus