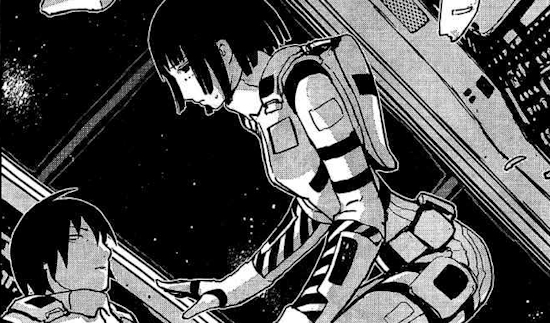 Outer space, the far future. A lone seed ship, the Sidonia, plies the void, ten centuries since the obliteration of the solar system. The massive, nearly indestructible, yet barely sentient life forms that destroyed humanity's home world continue to pose an existential threat.

Enter Nagate Tanizake, a young man who has lived isolated in the bowels of the ship, until a rice-raid gone wrong forces him out of the Underground. Once he's acclimatised to the realities of ship-life and his veil of ignorance is lifted, Nagata begins to understand humanities plight and becomes a Garde pilot.

Sidonia is an unlikely candidate for translation in the West, despite being considered one of Nikei's more approachable works. It's hard-edged sci-fi, very grim in places and quite melancholic, a world away from cute girls in tight suits fighting in brightly coloured mecha.

The book is full of interesting ideas with subtle nods to humanity's ability to adapt to harsh environments both mentally and physically. Oh, and a talking bear.

The "fish out of water" introduction through which our hero is introduced is a very tired mechanism but here it almost feels fresh again, probably because of the unique world Nihei has imagined with this work. The Gauna are a truly terrifying foe, though not entirely original as a concept either.  This sort of lumbering and un-knowable enemy has graced Japanese shows like Gunbuster, Evangelion and even games such as God Eater, and the depiction here is absolutely spot on. The hopelessness of the situation lends a real gravity to the work that mature readers will certainly appreciate. It isn't always easy reading, but it is never less than thoughtful and considered.

The artwork is also wonderful. Strong, evocative lines, the careful use of facial gestures (rarely does more than a nervous smile graces a single character throughout the book, highlighting the atmosphere masterfully) and the detail in the backgrounds is always worth a second look.

This isn't for everyone but mature, experienced sci-fi fans should find much to fall in love with here; the book carries the weight of it's world with a sure step and it's going to be fascinating to see how the book develops going foward.