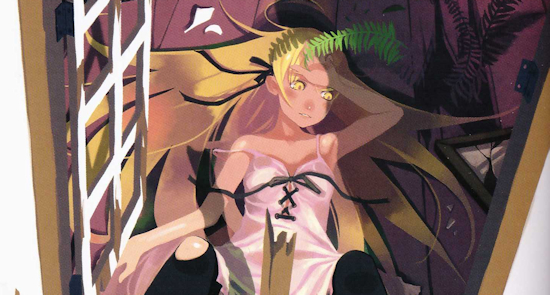 In a piece of near-perfect symmetry, just as the Monogatari franchise's television anime adaptations end with Owarimonogatari and effectively the closure of a major part of Shinobu's story, so Vertical have stepped up to the plate to publish the novel which starts her tale in the form of Kizumonogatari, or "Wound Tale" as it's subtitled here. As one of the few pieces of the Monogatari series that fans have been hungry to get their fangs into ever since we were treated to a whistle-stop tour of its story to open Bakemonogatari, followed by the announcement of a theatrical film adaptation that has now been years in the making but is finally due to arrive in 2016, we couldn't be more ready to delve in and sample what is hopefully a rare delicacy of a book.

In publishing terms, Kizumonogatari actually follows on from Bakemonogatari's two volumes as author Nisio Isin's second entry into the series, but as it serves entirely as a prequel with no real expectations of the reader's knowledge of the characters or setting, it actually fits perfectly as an opening gambit for newcomers alongside those veterans coming to the novel from those TV series; a testament to a novel that has been carefully written to stand alone, and one that is beneficial to us given that (at the time of writing) Vertical haven't committed to releasing any further novels in the series dependant heavily upon sales of this one.

Anyhow, that preamble out of the way, Kizumonogatari quickly introduces us to Koyomi Araragi - not so much your typical high school boy as a rather more atypical example of his kind. While others seek friendships and beyond during their daily school lives, Koyomi sees associating with others as something best avoided, lest it damage his "intensity" as an individual. Unfortunately for him it's a life choice which is frowned upon by model student Tsubasa Hanekawa, who strikes up conversation with him after a most unusual encounter, to which Hanekawa's response couldn't be much more unexpected. Come the end of this initial meeting the two have become friends - albeit only thanks to some forcefulness on Tsubasa's part - opening the way for a whole new chapter in Koyomi's life as his spring break begins... unfortunately, it isn't the kind of new chapter he'll be too keen on writing.

Having had a strange discussion about rumours of a vampire in town with Hanekawa, it is of course Araragi who himself encounters her - not as a threatening presence, but a beautiful woman who has been brutally stripped of her limbs and left to die. Even then, the prospect of having his blood sucked to save this woman should be enough to send our protagonist running, but instead he chooses to save this vampire at the sake of his own life - not that this young man can even get dying right, as he awakens as a vampire in his new master's thrall, tasked with retrieving her missing limbs from those who seized them. It goes without saying that this is a dangerous task, even in spite of the attempts of oddball mediator Meme Oshino to level the playing field, and there are plenty of twists and turns still to come.

Between the quality of the original writing and its subsequent English translation, there have been a few occasions over the past year or so where I've found myself unable to follow through and finish reading a light novel simply on account of the prose laid before me. Not so with Kizumonogatari - Nisio Isin's writing is absolutely stellar from first page to last - packed with fantastic dialogue, wonderfully descriptive and vibrant prose, and a style with walks the line between intelligence and accessibility as if it's the easiest thing in the world. Credit also has to go to the translation here as well, of course - this English edition is an absolute joy to read, with every paragraph sliding easily into your brain to be digested and savoured. Regardless of the quality of the story as a whole, I really can't praise the actual narrative text of Kizumonogatari enough; it's a thing of beauty that marks it out as a cut above your average light novel.

Thankfully, once you add the quality of Wound Tale's narrative into the mix I'm left equally breathless as I search for adjectives to praise it. As a long-standing fan of the Monogatari franchise in its animated form I'm not really in a position to comment on how this novel will hold up for newcomers to its world, but such is the strength of both story and characters here that I'm relatively confident that it should hold appeal for almost everyone. Nisio Isin's ability to take well-worn concepts and deliver surreal yet vibrant fresh takes on them shouldn't be underestimated, and Kizumonogatari is proof positive of this - lay out its vision of vampires and an over-powered protagonist on their own and it would be hard not to stifle a yawn at such over-used ideas, but these expectations are played with, reshaped and reformed magnificently, leaning heavily on your existing expectations of these branches of fiction and then giving things a quick shove to subvert those expectations when you're not looking. Even when its story descends into the perverse (which it does more often than I might like to admit, as the one "but" when it comes to recommending this book to people), somehow the writing manages to keep it from descending into sleaze, preferring to toe the line somewhere between "erotically charged" and "hormonal teenage exuberance". When even talk of panty shots and boob fondling feel almost classy, you can perhaps begin to grasp the talent on show in the writing here.

This process almost makes reading Kizumonogatari feel like watching a very good magician - you know that there are smoke and mirrors stacked throughout the story and sleight of hand at every turn, but that really doesn't matter as what's occurring right in front of you is so absorbing that trying to pick things apart to expose those moments barely even crosses your mind. For existing fans it's like reminiscing with old friends via anecdotes that help you learn even more about them (particularly in Tsubasa Hanekawa's case, as she continues to surprise throughout the series), while this book is offering newcomers a fantastic way to get acquainted with Koyomi and some of the unusual characters who have chosen to stick around with him. Let's hope we get to spend a lot more time reading through his other adventures, Vertical...

While we're talking about said publisher, praise is due beyond this novel's translation - the presentation as a whole feels slick and classy, ensuring that the book gets exactly the kind of treatment fans will have been hoping for. Would we have liked a digital option to purchase it? We certainly would, but this is a physical copy I can feel proud giving pride of place on a book shelf.

If you've watched and enjoyed any of the Monogatari series in anime form, then our recommendation here is simple - go out (or go online) and pick up a copy of Kizumonogatari, and do it now. Even with the first animated film not far away, this is a tremendous read and a wonderful way to experience this "gap" in the series timeline for the first time officially in English, and you'll likely love every minute of it. Even if you're simply curious about this series from discussions you've heard or clips you've seen of the anime, you'd certainly do well to give this a read as we almost guarantee you won't be disappointed - it seems almost unfair to use the "light novel" moniker here, because the quality and breadth of writing on show here surpasses what that tag often tends to suggest.

A great read, well-presented and superbly translated - this novel deserves a home on any book shelf, and it's one of the best cover to cover reads we've had from a light novel in a long, long time.

9
A superbly well-written novel, full of character and snappy prose, delivered via an impeccable translation and presentation.
COMMENT AND DISCUSS
blog comments powered by Disqus