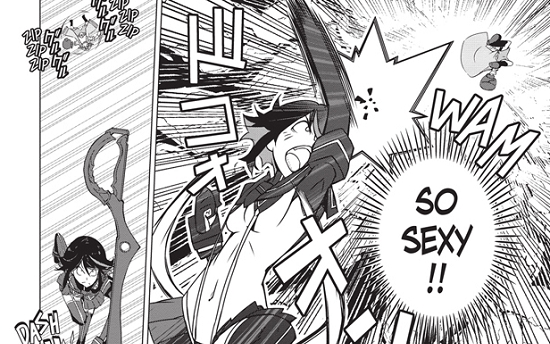 Most anime are adaptations of existing manga or light novel series; in numerous cases the anime isn't expected to be a success in its own right and is little more than an extended advert commissioned purely to improve sales of the printed series on which it's based. Some anime, like this summer's Overlord, even quite happily drop big spoilers in their opening sequences so viewers can anticipate their favourite chapters getting the full-colour service. If the anime's Blu-rays happen to hit big on the way to showing them then that's more a bonus windfall than something predicted in the quarterly forecasts. This doesn't affect us in the West too much as in many cases we're separated from the original source material, but on the few occasions where the trend of adaptation goes the other way and a manga is adapted from an original anime, the results can get interesting.

If your show is episodic like Cowboy Bebop then its manga can be "Further Adventures" as if they're unaired TV episodes. However this is rare for 'anime originals' - pitched by a director's particular vision, they're almost always storyline-led too. Manga adapted from anime practically have to juggle in a windstorm - advertising the show (even Sadamoto's long-running and fairly independent Evangelion manga began humbly as a 'teaser trailer' for the upcoming anime), struggling to obtain correct reference resources from an ongoing, fluctuating production instead of already having a stack of printed tankobons to study at leisure, and the Olympic sprinting required to keep a monthly magazine in time with a weekly television show. The latter in particular can result in the most faithful manga suddenly spinning off to its own abrupt ending (I best remember this happening with RahXephon, an ancient ADV Manga license that you'll struggle to even find in the bargain bins nowadays) or just running out of steam to a quiet cancellation with the anime it was attached to long since passed on. The Kill la Kill manga began in Young Ace the day after the first episode was broadcast in October 2013, but the manga was discontinued after 17 chapters in March 2015, a year after the show had finished with 24 episodes. We shouldn't be so quick to consign it to the latter conclusion, though - Kill la Kill is praised for its vitality with energy bursting out of every scene, and Udon Entertainment are confident that this same power will beam from the pages of the manga that it's now bringing to us. Much like how its inspiration kicked reason to the curb, Kill la Kill could be one to blow expectations out of the water. Is the Kill la Kill manga a smart and stylish book as snappily-dressed as its page-edges or like crumpled paper should it be creased in the back of the wardrobe of last season's cast-offs?

Honnouji Academy is definitely not a place that has truck with the principle of comprehensive education! At the top of a city-sized, forbidding ziggurat, life at Honnouji academy is strictly stratified - failing a test doesn't just put you in the bottom stream for Maths but consigns you and your family to dwell in the ramshackle slums at the dingiest tier at the bottom of this literal social pyramid. This order is ruthlessly enforced by a Student Council so powerful that even the teachers are cowed and submissive, with its "Four Devas" inspiring the fear of vengeful gods. President of the Council is Satsuki Kiryuin, and she shows her favour to pupils who toe the line not by sticking gold stars in their exercise books but stitching them into their uniforms. These "Goku Uniforms" bestow magical enhancements on the wearers, from the increased strength and agility of the One-Star prefects to the superhuman powers of the Three-Star Devas on the Student Council - and all of them use the Goku Uniforms to keep the system rigidly in line with an iron fist.

This oppressive educational system will soon by shaken up by the arrival of Ryuko Matoi - this transfer student isn't content with being the strange mysterious alien presence like in other stories; she's a cocky, rambunctious tearaway who's definitely not going to have any truck with the ironclad law of Honnouji Academy. Ryuko's refusal to submit to authority though is more than just delinquent rebellion - for she's also on a mission. Her father's been murdered, and nothing will sway Ryuko from her determination to find the killer - and as President Satsuki recognises the weird scissor-shaped sword that Ryuko carries with her, Honnouji Academy may finally be where the thread of the mystery begins to unravel.

If this all sounds rather familiar and the same sort of the material that you've already read about in the multiple other reviews for Kill la Kill on this site... that's because it is. The same designs, the same incidents, the same dialogue: the manga version of Kill la Kill gives you about an episode and a half of the anime in the format of wood pulp instead of digital scanlines - it saves on electricity but uses up more trees, so choose whatever makes you feel greener. In terms of story, action and design I honestly struggle to find much new to say about the content of this book that hasn't been covered in the other reviews - it is Kill la Kill, with all that such a title entails, and all in all it's following the trend of adaptation described above very closely. There are only a few minor details that have been slightly adjusted: when Ryuko has her first fight with the boxing club captain, she's able to escape when his enhanced gloves become too heavy to lift, which is a better gag than in the anime where he just tripped; but on the other hand, the other change in the very first scene where Gamagori finds the spy in the classroom is a more serious turn for the worse, where Gamagori just tosses the spy outside, leaving us bereft of the delirious manic cackle of him skydiving outside which was so crucial in establishing Kill la Kill's mood in the first couple of minutes, deflating a lot of its exuberance. In a comic-action story, that almost makes Kill la Kill fall at the first hurdle.

The artwork does correct the wobble, giving it enough energy to propel it over the line using elastic, stretchy limbs (the cover might give Ryuko a plasticine midriff, but the interior artwork is better) to effectively maintain a sense of momentum, and the speech bubbles also use a lively typeface to give the exclamations some punch.

Overall though, the Kill la Kill manga feels... redundant. I'm a huge fan of the show so I also enjoyed the content of this book, but precisely for that reason this release comes across as a quick cash-in relying on recognition of the name to pull in some sales rather creating a story to tell us anything particularly wanted or needed - you may appreciate it in the Omakase box of Viewster's premium service more for the rarity and collectors' value of the special gold covers than anything actually printed between them. If you haven't watched the anime before then this manga volume is a cheaper option than a disc if you want to get a taste of what it's all about before committing to a full series - but as so much of the Kill la Kill anime's flair was in its colour and inventive creation of movement then it really is only a taste.

5
Fine for newcomers, but as a die-straight rendering of the original anime if you've already watched that then there's no reason to read this.
COMMENT AND DISCUSS
blog comments powered by Disqus