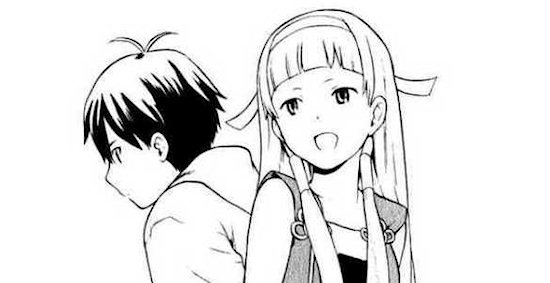 Kannagi, by former Type Moon artist Eri Takenashi has had a chequered history. After first being published in Comic Rex in 2006, not only achieving wide acclaim (as well as a loyal fan-base) but also getting that holy grail for all mangaka - an anime adaptation - the series went into hiatus after six volumes due to Eri suffering(according to official channels) from severe health issues, although as I write this plans are under way to restart the series, which should not affect this western release via Bandai Entertainment.

The series follows high school student Jin Mikuriya who, after hearing that the local Shinto temple is closing and its sacred tree (called a "shinboku" and said to house the local deity Kannagi) is to be cut down, decides to use part of it to make a wooden statue in the image of Kannagi. The last thing that Jin expected though was for Kannagi to actually appear from his wooden carving!

This is the least of his problems however, as it turns out that Kannagi, now bereft of her shinboku and worshippers from the temple, is drastically reduced in power and stature – a situation that would be grave enough if it weren’t for the fact that one of Kannagi's responsibilities as a local deity was to contain what seem at first to be the local “bad guys” of this series; beings of negative energy or “defilement” whose touch (and indeed mere presence) can cause calamity and woe to whoever is nearby.

Under this conceptual umbrella, the majority of the first volume is used as set-up – Jin (who we discover early on has the ability to see the "defilement") offers to help Kannagi in hunting down and eliminating them, using of all things a modified toy magical girl staff. Later on we are introduced to that staple of manga series – fellow high school student and female childhood friend Tsugumi Aoba, whose crush on Jin is almost derailed by the arrival of Kannagi. To Takenashi's credit the latter character resists the trope of a love triangle by not only assuming the identity of Jin's step sister, but also by later on telling her that not only is she not interested in Jin but that Jin also has feelings for Tsugumi.  However at the end of the volume a mysterious nun called Zange-chan appears who is not only all too eager to move in on Kannagi's patch, but whose connection to Kannagi herself will have consequences for everyone involved...

Fortunately the artwork throughout this volume is of quite a high calibre, with all the characters well proportioned and detailed and no accidental deviation from panel to panel (except where it's done for the sake of comedy). The manner in which this volume is written exhibits the rare talent of being able to switch from a light-hearted comedy scene to a more serious scene without appearing forced or contrived. None of the characters are written as lazy stereotypes, with each having their own personalities and traits, which as a result means the characters feel realistic and could be expected to be found In any Japanese high school - well, with some exceptions obviously.

Finally, the English translation from Bandai Entertainment is well executed and thought out, particularly with regards to Kannagi herself sporting a child-like mentality one moment before switching almost instantly into a cultured, formal speech that you might expect from a goddess the next. The volume is finished off with a well-researched translation page which also gives a basic heads-up on Shintoism (which much of the series' plot and background is based upon).

All in all, despite being primarily a set up for later plot lines, this first volume gives promise of greater things to come... well, goddess willing.

9
A good start, with definite potential to develop into a great series.
COMMENT AND DISCUSS
blog comments powered by Disqus