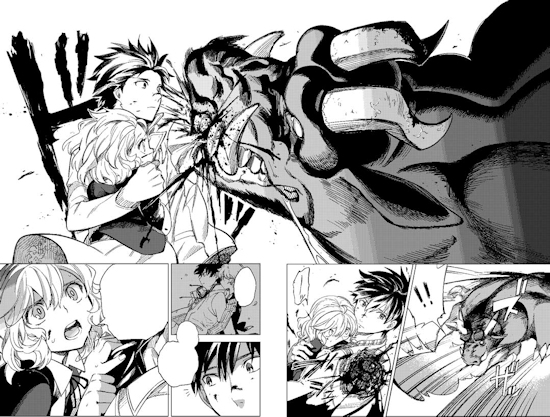 Ever since Yuzo Takada's 3x3 Eyes (or Saizen Eyes to give it the original title) I've loved monster manga, when done well. As a sub-genre, manga handles horror with aplomb, and since I like mine on the lighter side, Inspectre certainly appealed.

The story of a young girl named Kotoko Iwanaga and her crush, the rather resistant Kuro Sakuragawa, the petite Kotoko was abducted as a child. Her abductors turned out to be Yokai, demons and spirits of the Earth, who wished her to become their Goddess of Wisdom. Such a deal would come with a price, and upon accepting she sacrificed her eye and leg.
Returned to our world, Kotoko now works with these forces to resolve disputes and solve problems in the supernatural world. She meets Kuro in hospital, and maintains a crush for 2 whole years before learning he's newly single - having waited patiently she makes her move directly asking if he will date her with a view to marriage (one of my favourite panels of the year, all 9 days of it so far!)

The pair get to talking and Kuro seems to be quite accepting of her tales of demonic spirits, which is a surprise at first - until it is revealed that Kuro himself is not all he appears. Taking an odd-couple turn, the pair find themselves dealing with a rogue spirit, and from that point on become partners (albeit reluctantly on one side!) dealing with rogue elements in the spirit world.

I have a soft spot for manga with unusual relationships, and cute, pushy girls are a particular favourite of mine. Chashiba Katase's artwork is beautiful, with delightful expressions conveying a ton of emotion (in particular the mouths are always drawn with more detail than I've come to expect). Coupled with some creative monster designs and plenty of background detail, it's one of the best looking books I've seen to date, amidst a recent wave of excellent titles.

The pacing in book one is brisk, and works very well as a standalone book. By the time we hit volumes two and three, we're on to the Steel Lady Nanase case, and to be fair I thought this dragged somewhat. There's a lot of exposition, and frankly the plan is over-explained to the point of tedium - no matter how pretty the characters are, there are only so many ways I need to be told that in order to defeat a spirit given form by belief, a new, less harmful version of the story taking hold in popular consciousness will defeat it. But it takes almost an entire book before they're actually doing anything, so while book one gives a very positive impression, the following volumes could have used  some trimming.

Pacing problems aside, the premise is solid and the players are engaging - when running at full tilt the dialogue sparkles with romantic tension, no matter how one-sided. The action scenes are expertly drawn, and the book has a rare quality that keeps me coming back to it.

So perfect? No, but solid and with lots of potential. I'll certainly be sticking around for future volumes (Kodansha's sale ensured that much) and I hope to have nothing but praise for the next 3 volumes!

7
The first book is near perfect, the subsequent stories slacken the pace, but this is a quality production and well worth a read.
COMMENT AND DISCUSS
blog comments powered by Disqus