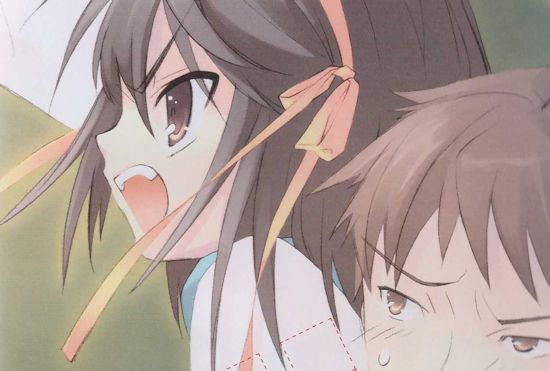 We've talked in the past about how the UK release of a new Haruhi Suzumiya light novel from Yen Press is a reassuring constant in some of our lives, and although it no longer seems to match up perfectly with the MCM London Expo (much to my disappointment) the arrival of a new volume is always sure to put a smile on my face, even if the quality of recent books post-Disappearance hasn't exactly been stellar.

Certainly, if you're looking for some kind of massively revelatory or game-changing tale from this latest novel, The Indignation of Haruhi Suzumiya, then you may as well click the "Close" button on this review right now, because I can promise you nothing of the sort from this instalment of the series.  Instead, this volume brings us two short stories that are relatively frivolous in nature, and do nothing to shift or progress the over-arching story regarding any of the main characters.

The first of these two stories sees some turmoil brought to the SOS Brigade as their unofficial existence finally comes to the attention of the student council who, using Yuki and her one-member Literature Club's lack of activity as their fulcrum, try to force the brigade both out of existence and their club room.  Of course, this also leaves a rather large opening for the Brigade - provided they can prove that the Literature Club are engaging in suitable activities, they can be saved.  Thus, the gang find themselves tasked with writing stories of various genres for a club publication - a task which makes for some "interesting" stories from its oddball members, while Kyon has to figure out how to write a love story with Haruhi's ever-present keen interest watching over him.

The second half of the novel sees a rather rare turn of events visit the SOS Brigade - a potential supernatural case to investigate.  This particular case involves the suggestion of a ghostly presence in town which only dogs seem able to sense - an unlikely story that actually has an even more unlikely root cause, and one that requires urgent intervention as it threatens to escalate into a major canine threat and beyond.

Despite neither story having much substance as anything other than a stand-alone outing featuring its much-loved cast, both tales do at least engage themselves using some of the twists and turns that have become par for the course in the series, complete with the usual required dose of acerbic wit courtesy of our narrator Kyon as a topping.  If nothing else, this ensures that both of the stories contained within Indignation regain a little of the sense of fun provided by some of the earlier novels - the inclusion of Mikuru and Yuki's finished stories for the literature club anthology is delightfully in-character and amusing, Kyon's love story that isn't proves to work better than it perhaps has any right to, and the group's spot of ghost-hunting is far from the strongest story the series has ever seen but at least invokes some of the joys of its previous outings.

In essence, this volume of the Haruhi Suzumiya series well and truly puts the "light" into "light novel" - there's nothing too demanding or pressing to be found here, and the lack of any real forward motion within the series is beginning to feel a little frustrating, but on the other hand is you enjoy just spending time with its cast of characters then Indignation is a pretty fun way to while away some time with them.  It does leave me wondering whether the series will ever hit the heights of either the original novel or Disappearance again, but at least in the meantime this feels like the most fun I've had reading a novel from the series in a while.

7
It only holds a couple of light and fluffy tales that do nothing to feed the wider stories of the series, but at least it makes for a relatively entertaining novel in its own right.
COMMENT AND DISCUSS
blog comments powered by Disqus