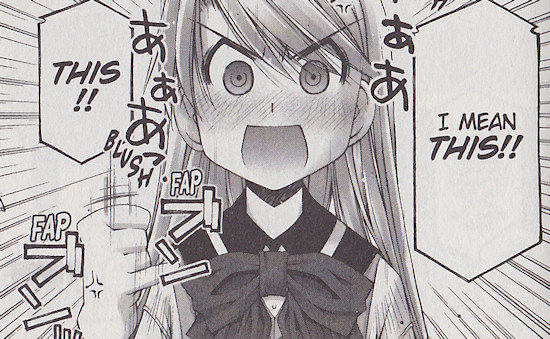 No matter how many times I repeat the mantra "you can't judge a book by its cover" over and over again, it's hard not to judge a book featuring an ungainly girl trying (and to be quite honest failing miserably) at looking a little seductive next to a speech bubble which proclaims "I Don't Like You At All, Big Brother!" - welcome to the world of this latest manga release from Seven Seas Entertainment, which ships its first two volumes as a single omnibus edition.

Of course, the star of this cover - a young girl named Nao - is only pretending not to like her big brother.  In fact, she's dangerously infatuated with him despite knowing all about what a hopeless pervert he is, and has no hesitation in teasingly him mercilessly with a flash of underwear here or a glimpse of flesh there.  Quite why Nao is quite so obsessed with Shuusuke, the brother in question, is never made clear - she just is, and it's quite obvious that we're supposed to let this fly so that the series can continue with its proper business of titillating us at every opportunity.

The trouble is that incest really isn't all that hot to put it mildly, so the first of the two volumes on show here quickly establishes that Nao isn't actually related by blood to her "big brother", via the usual clichéd story of a car crash which killed her parents and left her with amnesia as a child.  Of course, this makes Nao's senseless infatuation with Shuusuke absolutely okay... apparently.  With this barrier to their forbidden lust removed, it seems as if nothing will stand in the way of Nao getting what she wants - we can't have that from our fan service comedy however, so up pops an old childhood friend of Shuusuke to throw a massive spanner into the works as our big brother's youthful perversions come back to bite him in a major way.  Come the end of these two volumes, the stage is well and truly set for a major conflict between Nao and newcomer Iroha over who can catch the sleazy eyes of Shuusuke.

In all honesty, there's nothing particularly wrong with this, ignoring the inherently horrible premise of a relationship between siblings, adopted or otherwise - mind you, even this major plot device seems to have been constructed with a knowing nod from the author that it's horrific, as his own notes at the end of the volume reference the "vulgar and stupid" nature of the story in a refreshing blast of candour that could teach E. L. James a thing or two.

No, where I Don't Like You At All, Big Brother is really found wanting is in the delivery of its two core goals.  First and foremost, there's the fan service itself, which has to contend with a rather scattershot visual aesthetic - put bluntly, the main female characters all look rather weird a lot of the time, with overly elongated limbs and necks and protruding ears that just don't quite look right.  This is only accentuated by the artist's penchant for lots of stand-out, full-length character illustrations - sometimes these images feel well-proportioned and manage to be suitably sexy, but too often they jarringly out of proportion.

The other area where the series struggles is in terms of delivering any story or comedy worthy of the name - there are a few chuckles to be had late in the book (and Seven Seas should be given kudos for an excellent translation that is almost more than the series deserves) but such moments are few and far between, while any semblance of a plot is virtually non-existent beyond clichéd ideas and half-baked excuses to get the case to undress, strip off or find an opportunity to flash their underwear to anyone willing to look.

All things considered, if you're happy to read a manga series made purely for the sake of glimpsing some female flesh and girls in their underwear, then I Don't Like You At All, Big Brother succeeds in that goal quite admirably.  You'll rarely need to sit through more than a couple of pages without getting a panty shot or some kind of suggestive sexual content, and in that respect it's almost a shame that the author didn't decide to stop sitting on the fence and create an all-out hentai manga - instead, you're left with a non-existent story filled with lots of titillation that never really "goes all the way", as it were.  The trouble is, there are better ways of getting your kicks if all you want are suggestive dialogue and poses, and to put this series in the same league as Love Hina and its ilk as the back cover of this volume attempts to do is almost missing the point entirely - that series became a hit as much because of a likeable female character roster and vaguely competent writing, and I Don't Like You At All, Big Brother can claim neither of those strings to its panty-laced bow.

3
Although it delivers plenty of fan service, these volumes are completely bereft of a notable story or characters. I don't like you at all, stupid manga!
COMMENT AND DISCUSS
blog comments powered by Disqus